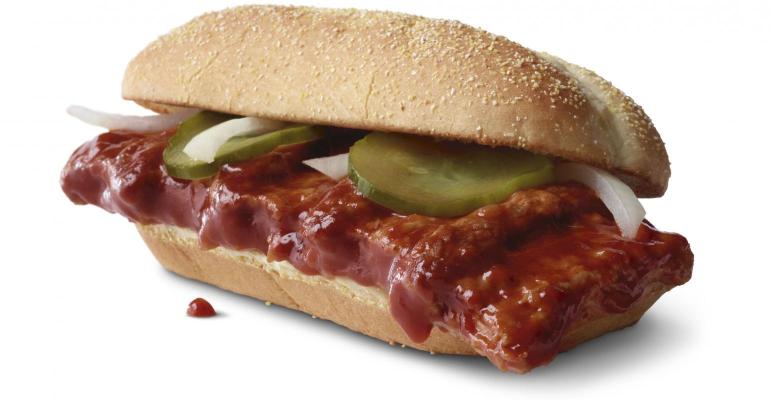 Photo courtesy of McDonald's
The McDonald's McRib returns to menus through Nov. 20 in what McDonald's is calling a "Farewell Tour."
Data & Research>Top 500 Restaurants

McDonald's teases another farewell tour for the McRib

The McRib is back through Nov. 20 with what McDonald's is calling a "Farewell Tour."

The McRib sandwich is both a pioneer and a case study in how urgency creates demand, as year in and year out McDonald’s offers the popular item for a limited period, reliably driving traffic and sales each time. Since the McRib’s 1981 introduction, several brands have taken a page from this playbook, from Wendy’s Spicy Nuggets to Taco Bell’s Nacho Fries, with much success.

Now, however, McDonald’s is hinting that the product could be sunsetted from menus for good, launching what it’s calling a “2022 Farewell Tour” on the McRib’s website. The company says the McRib will be available at participating restaurants starting Oct. 31 until Nov. 20 and advises customers to, “Enjoy our famous pork sandwich as if it’s your last!”

We’ve seen this idea play out before. McDonald’s previously held a farewell tour for the iconic sandwich back in 2005, when the company said the promotional menu item “outlived its original intent.” Since then, however, the sandwich reappears on a seasonal basis – sometimes regionally and occasionally nationally – creating a cult following that maintains a McRib Locator website, blogs, fan pages on social media and even conspiracy theories.

It’s worth noting that the sandwich consistently generates such fanfare not just because of its scarcity, but also because of its uniqueness in the quick-service category. The McRib features seasoned boneless pork dipped in tangy barbecue sauce and is topped with onions and dill pickles and served on a toasted homestyle bun. That uniqueness came under a rare threat last year with Arby’s real country style rib sandwich launch, positioned specifically to compete with the McRib. Arby’s even enlisted rapper Pusha T to diss the McDonald’s sandwich in a song titled “Rib Roast.”

Threats aside, a permanent removal from the menu is hard to fathom given the McRib’s dependable success and legacy. That said, the company’s 2021 promotion included collectible non-fungible tokens, or digital versions of the McRib, with McDonald’s noting, “With the McRib NFT, you’ll never again have to say goodbye to the sandwich you love.” Time will tell if the campaign was foreshadowing an actual finale of the real product.

Update: A McDonald's spokesperson said, "we've announced that this year could be consumers' last chance to get their hands on (the McRib)" – the emphasis on "could be" is from the company.

"The McRib has developed a cult-like following over the last four decades that truly cemented its place in culture. But one thing our fans know all too well is that you never really know when – or if – the McRib is coming back," Tariq Hassan, McDonald’s USA chief marketing and customer experience officer, said in a statement. "This 'Farewell Tour’ is our way of sending this saucy, legendary sandwich out in style... at least for now... and gives both longtime McRib lovers and newbies one more chance to get a taste."

McDonald's also notes its McRib Farewell Tour will include limited-edition, vintage-inspired merchandise and a compilation of the McRib's "greatest hits" from its last four decades. Among those "hits," or facts, are:

McDonald's ends its "greatest hits" list at No. 7, with "See Ya Later, McRib:" "The McRib has truly become a family affair for over 40 years, passing down the sandwich as tradition and making memories to last a lifetime. Now's your chance to share a McRib before it's gone."