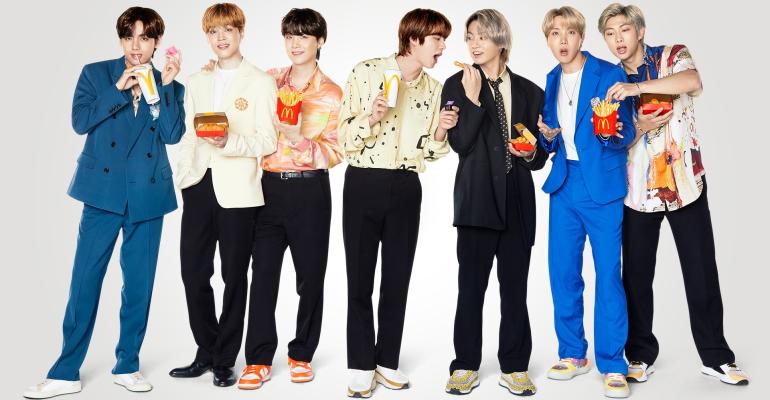 McDonald's announced a heavy marketing investment in Q2 2020 aimed at accelerating recovery from the pandemic, driving growth and going after share. That investment created marketing momentum that continues today.

During the second quarter of 2020, when most restaurant brands were still trying to figure out how to equip their restaurants with Plexiglas and their employees with PPE, McDonald’s CEO Chris Kempczinski announced his company was dedicating an incremental $200 million toward marketing spend.

This “marketing war chest,” as he called it, was aimed at accelerating recovery, driving growth and “getting aggressive in going after share.” The effort kicked off with the chain’s Famous Orders platform, featuring the Travis Scott meal. The promotion was so successful, McDonald’s experienced a shortage of Quarter Pounders.

The Famous Order campaign continued through 2021 with various other celebrities, including BTS, Saweetie and J Balvin, with a goal of creating more cultural relevance among younger consumers. Younger consumers, specifically those ages 11 to 24, have historically been a weak spot for the brand, according to Wells Fargo.

That no longer seems to be the case. The Travis Scott meal kickstarted a deeper connection with that younger audience, Wells Fargo noted, and that momentum continues today as evidenced by the most recent quarter.

During the Q3 call Thursday morning, Kempczinski said McDonald’s marketing team is “firing on all cylinders,” which has contributed to 6.1% same-store sales growth in the U.S. system, as well as higher traffic counts. The past few months have featured promotions such as Camp McDonald’s, a TikTok anthem launch celebrating the chain’s popular Sprite offering, and the Cactus Plant Flea Market collaboration. The latter promotion is likely the chain’s most successful collaboration to date, according to data from Placer.ai, which reported a 30%-plus increase in visits in the days following the launch.

These promotions are doing what they were intended to do – create more cultural relevance among younger consumers. Consider Travis Scott’s fan base, for instance. According to YouGov, he is most popular among younger consumers versus Gen X and Baby Boomers, and by far. The Cactus Plant Flea Market brand started as an underground streetwear line that has since been made popular by Scott, Offset, Lil Uzi, Kid Cudi, LeBron James, Drake and more. And, nearly 60% of BTS fans are under the age of 40.

Tapping into popular culture is intentional. Kempczinski said McDonald’s hasn’t always leaned into its relevance in the past, despite being one of the 10 most recognizable brands in the world.

“What you’ve seen over the last several years for us is just finding more ways we can connect our equities … our experience to what’s going on in culture,” he said during the Q3 call. “All of these different things show to us a reminder that we are charged with shepherding and stewarding one of the most fantastic equities in the world and we’ve actually got to find ways to continue to keep it fresh.”

The work, he added, not only generates more traffic, it also benefits the company’s balance sheet.

“If you’re having to look with a microscope to see the impact of marketing on your P&L, then it’s not big enough,” he said. “I think what we’re starting to see now is our marketing programs show up as significant, meaningful comp drivers for us. That’s what gives us confidence that we’re finding the right engagement with the consumer.”

The needle movement is evident in Piper Sandler’s semi-annual Gen Z survey. In the spring of 2018, McDonald’s was the favorite among 4% of teens. This year, it’s at 6%. That may not seem like a lot, but it’s No. 4 overall and just one percentage point away from perennial favorite Chipotle. Another recent survey, conducted by YPulse, found that McDonald’s is the favorite restaurant chain for 13-to-39-year-old consumers.

“Affordability and nostalgia are major drivers for fans of (McDonald’s),” the YPulse survey noted.

“Through a collaboration with Cactus Plant Flea Market, we tapped into one of the most nostalgic McDonald’s experiences – enjoying a Happy Meal as a kid – and repackaged it to make it relevant for adult fans,” he said. “It’s fair to say this sentimental experience was a success, as 50% of our supply of collectibles was sold in the first four days of the promotion. These increased visits also drove the highest weekly digital transactions in the U.S. business.”

He also noted it “re-engaged” customers to McDonald’s core menu items, as the meal came with either a Big Mac or Chicken McNuggets. It’s worth noting that all the chain’s recent and wildly successful campaigns have added little-to-no operational complexity, as they’ve featured existing menu items. This is not only more cost effective, it’s also a win as labor shortages persist.

In July 2021, Kempczinski said, “Our goal was to create an ambitious marketing campaign, one that would leverage our customers favorite core menu items, speak to a new generation in authentic ways and increase digital engagement without adding any restaurant complexity, all while positioning us for the longer term.” So far, at least, mission accomplished.