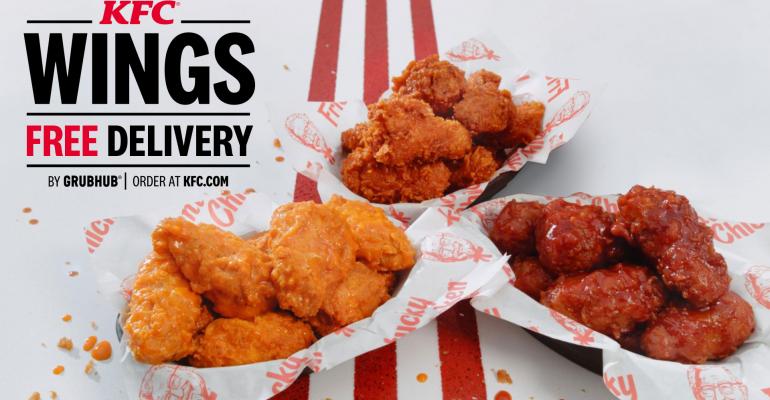 The battered and fried Kentucky Fried Wings, available in a “classic” un-sauced version or in Nashville Hot, Buffalo or honey barbecue sauces, will be part of the chain’s permanent menu at participating restaurants starting Oct. 10. They’re priced starting around $5 for 6 wings, $9.99 for 12, $18.99 for 24 and $36.99 for 48.

There are more than 4,000 KFC locations in the United States.

To promote the new items, KFC is offering free delivery on orders of $12 or more for customers who order through kfc.com, grubhub.com or Grubhub’s New York City brand, seamless.com. That offer is available through Nov. 24.

Chicken wings have become part of the football experience for many Americans. The chicken industry’s trade association, the National Chicken Council, projected that Americans would eat around 1.4 billion wings during Super Bowl weekend alone.

Andrea Zahumensky, chief marketing officer for KFC U.S., said in a statement announcing the launch that the new offering by the Yum! Brands subsidiary would allow customers to circumvent the bottlenecks that can occur when ordering wings on game day.

“You would be hard pressed to find hot and fresh wings without the wait anywhere else,” she said. “Whether you are Team Nashville Hot or Team Honey BBQ, our Kentucky Fried Wings are available on demand, revolutionizing your gameday dining experience.”

To promote the launch, KFC is launching a new ad on Oct. 13 featuring Sean Austin as “Colonel Rudy,” who trots the new wings onto the football field and is raised on players’ shoulders in celebration.

Astin played Rudy in the original 1993 film of that name, as well as in a KFC commercial introduced in September.