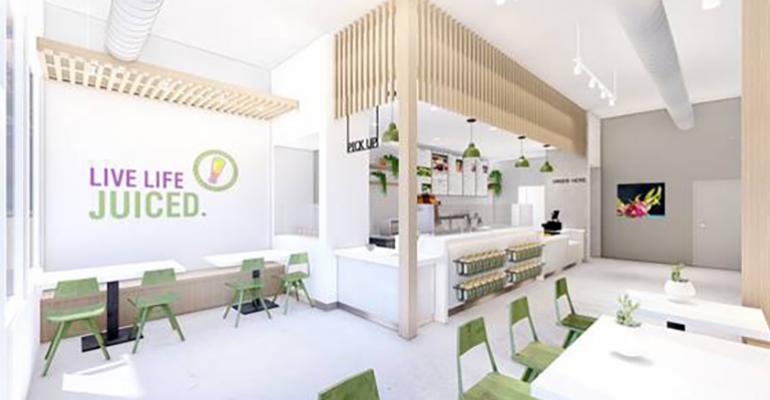 Juice it Up is 26 years old but gets treated like a new brand...CEO Susan Taylor is going to change that.
News>Quick Service

With 20 years of the açaí bowl under its belt, the quick-service chain is entering its next phase of growth

Celebrating 20 years of the açaí bowl, Juice it Up is no young brand.

“We’re a 26-year-old brand, but…I still get a lot of folks that think that we're this up and coming brand. And it's like, no, we've been in the game for long time,” the company’s CEO Susan Taylor told Nation’s Restaurant News.

The brand is believed to be the first American brand to popularize the açaí bowl back in 2001. Vice president of supply chain Melissa Aills even remembers when the bowl was first introduced, and she had to go from location to location and explain how to pronounce açaí to store associates.

The bowl, created in partnership with food company Sambazon, was one of the first “superfood” bowls on the menu at Juice it Up, which now boasts juices with fruites like acerola and pitaya.

“A journey spanning two decades is a long one, and we are grateful to have worked in lockstep with an amazing company like Sambazon to emerge as one of the nation’s first chains to introduce açaí smoothies and bowls to our guests,” Taylor said in a release. “Today, we are as committed as ever to remaining at the forefront of food science by utilizing vitamin-packed superfoods to provide our guests with the best tasting functional products in the smoothie and bowl market.”

But the brand’s not just celebrating 20 years of açaí – it’s celebrating a great financial year as well.

After closing 2020 with the highest sales growth in company history, Juice it Up continued success, raising sales by 50% in the first half of 2021. That’s a two-year 35% increase in comparable sales.

Taylor attributes the company’s increases in sales to the chain’s franchisees.

“Our franchisees have really stepped up and have continued through pandemic can make a difference in their communities and really working with their team and their businesses,” she said.

According to the brand’s owners and leadership team, the sales achieved in the first half of 2021 are largely due to strong growth in digital sales and third-party delivery, a 50% increase in loyalty members, and a continued emphasis on menu innovation focused on equal parts flavor and functionality.

Customers range from young to old — not just Middle America, though 57% of the brand’s stores are located there.

“We went into our loyalty base, and we looked at our top 25 loyalty members, the ones that have transacted with us the most, and we had folks that were in their mid-20s. And we had a gentleman that that was in his probably late 50s, early 60s,” Taylor said.

Each of these customers was given a present, many of them accepting the gift inside the franchise location they frequent since they are there almost every day.

That’s how loyal Juice it Up’s customers have become in this crowded juice space, and the chain is building on that love.

The brand’s five-year plan is to reach 200 stores — and it’s well on the way.

Juice it Up currently has “more than 80” units, according to a release, and is planning on opening 13 stores next year and 15 stores a year for the next 3-5 years.

But it isn’t growing with reckless abandon. Taylor has recently looked at the menu, analyzing the SKUs and analyzing what was confusing to customers after hearing feedback from franchisees.

For example, the plant-based “juice fusions” were taken out of the specialty juice section, moved to the smoothie section and labeled as a plant-based smoothie to make it clearer for customers.

In its next phase of growth, Juice it Up will trim the menu.