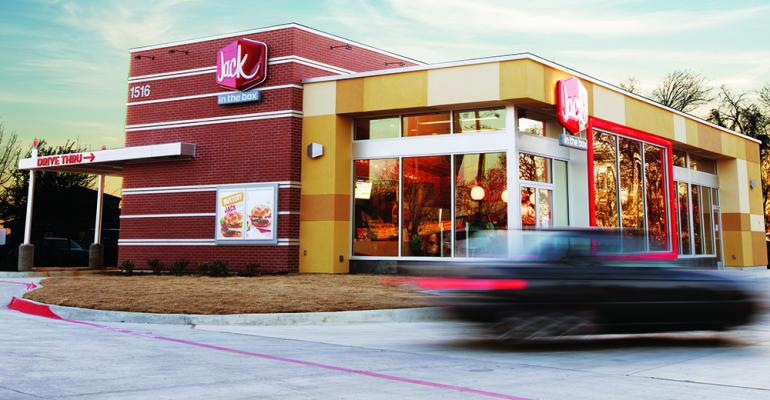 Amid growing unrest among most of its franchisees, San Diego-based Jack in the Box is exploring a sale, according to a Reuters report.

Citing sources “familiar with the matter,” Reuters said the burger chain began talking to potential buyers this month including private-equity firms.  At the same time, Jack in the Box has plans to downsize its San Diego headquarters with the sale of its main corporate building, according to a regulatory filing made this month.

Chain spokesman Brian Luscomb said the company does not comment on rumors and speculation. However, he did confirm the chain’s intent to sell its 150,000 square foot main office and relocate to a smaller building next door.

In the meantime, Wall Street analysts speculated Friday about the potential impact of a sale. Though unconfirmed, many said the move is not farfetched given the spate of merger and acquisition activity occurring in the sector.

Analysts also said a sale could be spurred by activist shareholders, including the recent board expansion deal the company cut with JANA Partners LLC. As of Aug. 3, JANA had a 6.7 percent stake in the company.

Wedbush analyst Nick Setyan said he believes “there is an internal activist push to explore a sale based on the thesis that” Sonic sold for a high value, and so should Jack in the Box.

But, Setyan pointed out that Jack in the Box is no Sonic.

The struggling California burger chain has not set itself up for sale in the same way Sonic did. When the bid was made on Sonic, the brand had grown same-store sales, while Jack in the Box’s “growth continues to decelerate,” Setyan said.

Sonic has also invested in technology and did not face the same level of “franchisee headaches” compared to Jack in the Box, he wrote.

In recent weeks, a group of Jack in the Box franchisees have called for the removal of CEO Leonard Comma and filed a complaint with California regulators about the chain’s recent restructuring of its real estate portfolio.

On Friday, The National Jack in the Box Franchisee Association told NRN: “We welcome any change in ownership and leadership that recognizes the critical role that franchisees play in the overall success of the brand. … We are hopeful that any suitor would work closely with the NFA and invest the resources necessary to grow this brand to unprecedented heights.”

In its latest earnings call, Jack in the Box leadership briefly addressed franchisees concerns about real estate strategy, saying they had nothing to worry about and the concerns were “fair but unfounded.”

Some analysts said the sale of Jack in the Box could lead to the unloading of certain real estate assets, including 209 properties. The sale of at least 75 to 125 properties could generate gross proceeds ranging from $150 million to $225 million, wrote BTIG analyst Peter Saleh.

“While the company owns 209, we believe it is unlikely they would sell all of them as some are likely lower quality or have other impediments to a sale,” Saleh wrote.

Saleh said a more likely real estate play would be Jack in the Box’s reported sale of its company headquarters in San Diego, which the brand mentioned in a regulatory filing this month. The 150,000-square-foot building is owned by the company, along with a 70,000 square foot Innovation Center.

“We plan to sell our principal executive offices and consolidate our headquarters in the Innovation Center, which we believe will be suitable and adequate for our purposes,” Jack in the Box wrote.

The company has 400 corporate employees, down from 1,000 six years ago, he said.

In March, Jack in the Box completed the sale of Qdoba to Apollo Global Management in a $305 million cash deal, ending the burger chain’s 15-year ownership of the fast-casual Mexican brand.

For the quarter ended Sept. 30, Jack in the Box reported a 0.5-percent increase in systemwide same-store sales. Total revenue for the quarter declined to $177.5 million compared to $232.1 million for the same quarter last year.

Net profit of $16.3 million, or 68 cents per share, was down from $30 million, or $1.05 per share, from the same quarter last year. The reduction was due in part to discontinued operations tied to the sale of Qdoba.

During the quarter, the company said it completed its refranchising initiative with the sale of eight Jack in the Box restaurants. Roughly 94 percent of the company’s 2,251 restaurants are franchises.