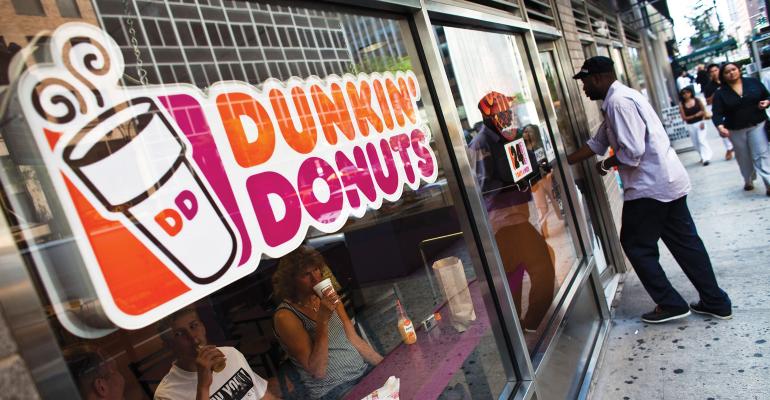 He succeeds Nigel Travis, who will stay on as executive chairman He will also serve on the company's board of directors and remain president of Dunkin' Donuts U.S, a role he has held since 2016, according to a news release from the Canton, Mass.-based company.

Hoffmann succeeds Nigel Travis, who is retiring from the role he has held since January 2009. Travis will remain active with the company as the executive chairman focused on international business. During Travis’ tenure, the company completed its IPO in 2011, entered into 25 new international markets, and added almost 6,000 net new restaurants globally, the company noted in the release.

"When we recruited Dave to Dunkin' Brands 18 months ago with the intent that he would succeed me as CEO, we knew that we were getting a world-class leader with extensive restaurant industry expertise, and he has exceeded all of our expectations,” said Travis in the news release. “From his development and implementation of the Dunkin' Donuts U.S. Blueprint for Growth, to the relationships he has forged with our franchisees and the talent management skills he has exhibited, Dave has demonstrated he is exactly the person to lead the next phase of our global growth."

Since joining the company, Hoffmann has led Dunkin’ Donuts U.S. operations and overseen digital initiatives and the next generation concept store. Previously, he spent 22 years with McDonald’s Corp. He started as a crew member in high school and years later became the president of high growth markets, which included China, South Korea, Russia and several additional European markets.

"I want to thank the Dunkin' Brands board of directors for the opportunity to lead this incredible company,” Hoffmann said in the news release.  “I also want to offer my heartfelt appreciation to Nigel for his decade-long leadership of Dunkin' Brands as well as for the support he has shown me since I joined the company. Thanks to Nigel, our franchisees around the world have flourished; our asset-light model has yielded strong shareholder returns, and we are well-positioned for long-term growth. … We have a strong legacy and an even more exciting future together."

Currently, there are 12,500 Dunkin' Donuts restaurants and more than 7,900 Baskin-Robbins restaurants worldwide.