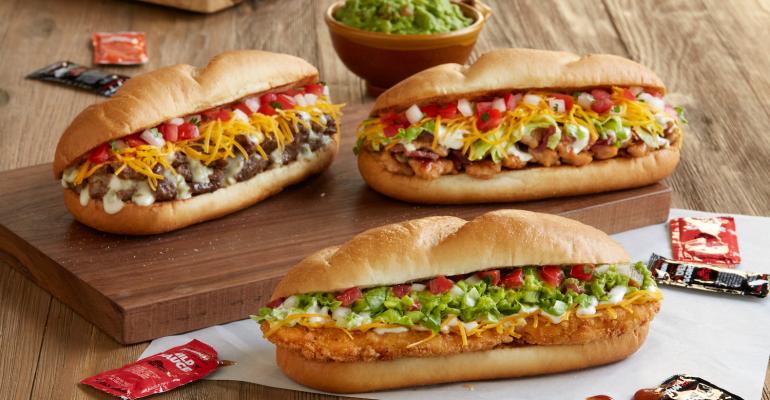 Del Taco is rolling out a line of tortas systemwide.
News>Quick Service

Del Taco is rolling out tortas, a Mexican style of sandwich, at its roughly 600 restaurants systemwide on Thursday, the company said.

Initially the new Epic Tortas will come in three varieties, each on a 7-inch roll that is toasted before being filled.

The Chicken BLT Epic Torta will be made with grilled marinated chicken, bacon, ranch sauce, grated cheddar cheese, shredded lettuce and pico de gallo and will sell for around $6.59.

The Crispy Chicken Guac Epic Torta will have two breaded and fried chicken strips in ranch sauce with guacamole, grated cheddar, lettuce and pico de gallo and will sell for around $6.79.

Related: Taco Bell is testing out flatbreads and wraps

Hackbardt, who was first Del Taco’s CMO in 1999, said the chain based in Lake Forest, Calif., had tested tortas three times previously without success.

“The category has changed now,” he said. “Probably Carl’s [Jr.] started it with the $6 burger,” which was launched in 2001. That was followed by premium sandwiches from Arby’s, Popeyes’ chicken sandwich and other more upscale items that Hackbardt said paved the way for Del Taco’s tortas.

“Now it’s more believable that you could go to a fast-food place and get this high-quality product,” he said.

The tortas will come on pre-sliced split rolls that are not quite cut all the way through, which operationally means they’re similar to stuffing a taco, Hackbardt said.

These three tortas are just the beginning of a whole category, he said, with recipes already developed for torta limited-time offers, including some breakfast options.

“We think there’s some really good opportunity for this item to take us to some new places,” he said, noting that its very delivery-friendly and suitable as a dinner entrée, and that dinnertime is when a lot of food is ordered for delivery. The fact that most Del Tacos are open 24 hours a day also gives them an advantage with this product, as does the fact that other Mexican chains don’t offer tortas.

“We [also] feel that there’s potential to steal a little of the $26 billion sub sandwich category,” he added.

The September 1 launch is meant to tie in with the beginning of college and professional football seasons, and to promote that, customers who order the tortas via the chain’s Del Yeah! app will get free delivery on weekends during the month.

The launch of the tortas is part of a broader branding initiative called Del Taco Better Mex that highlights the chain’s premium products, including house-made pico de gallo, guacamole and beans and cheddar cheese that’s grated in-house. The chain indicated that other premium products would be launched soon, without providing more details.

To promote the tortas, Del Taco is changing its name to Del Torta for the first week of September, including changing all the signage at a recently remodeled unit in Lakewood, Calif.