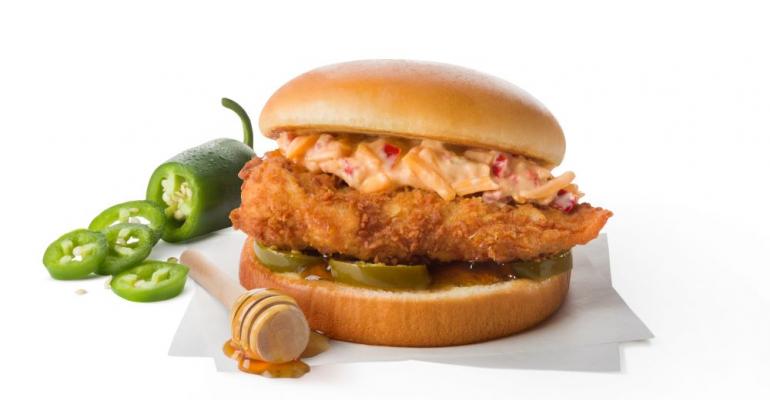 This week, McDonald’s introduced a new spicy version of its iconic kid-friendly Chicken McNuggets,. Not to be shut out or perhaps by coincidence, quick-service rivals Chick-fil-A and Jack in the Box are also promoting fried chicken products this week.

San Diego-based Jack in the Box recently brought back Spicy Chicken Strips to the menu. Atlanta-based Chick-fil-A, considered by McDonald’s franchisees as one of the brand’s biggest threats, is testing a new Honey Pepper Pimento Chicken Sandwich.

The Chick-fil-A culinary team said the limited-time sandwich is a twist on the brand’s Original Chick-fil-A Chicken Sandwich - a brand first.

“This is the first variation of the Original Chick-fil-A Chicken Sandwich we’ve tested as a seasonal item,” Chef Stuart Tracy, a senior culinary developer, said in a statement.

The sandwich comes with the original filet topped with honey, pimento cheese and mild pickled jalapeños. Like other sandwiches, it is served on a toasted bun.

It is available, starting this week, for a limited time at participating restaurants in upstate South Carolina and the Asheville, North Carolina area. Starting cost: $5.39.

Tracy, the chef behind the original indulgent sandwiches at Butcher & Bee in Charleston, S.C., took inspiration from the standout flavors that make for best “melt-style” sandwiches.

That led to a “savory, salty, sweet and melty” sandwich that appeals to a wide variety of flavor palates, the company said.

Chick-fil-A said during preliminary consumer testing, the sandwich “won in a landslide” when compared to other sandwich concepts under development.

“We have a feeling guests will love it.” Tracy said.