Two years after stepping down as CEO of Popeyes Louisiana Kitchen Inc., Cheryl Bachelder has returned to the restaurant industry as a board member at Chick-fil-A Inc.

Bachelder, who was named interim CEO at Fort Worth, Texas-based retailer Pier 1 Imports Inc. in December, joins founding-family directors Dan Cathy, Chick-fil-A chairman and CEO, and Bubba Cathy, president, on the eight-member board at the Atlanta-based quick-service chicken brand.

A Chick-fil-A spokesperson said Monday that two directors, James “Buck” McCabe and Steve Robinson, recently left the board to be succeeded by Bachelder and Dale Jones, president and CEO of Philadelphia-based Diversified Search. 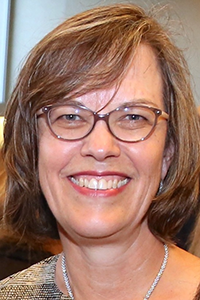 Bachelder (left) was named CEO of Atlanta-based Popeyes in 2007 after serving a year as a board member. She stepped down as CEO in March 2017 after the company was acquired by Oakville, Ont.-based Restaurant Brands International Inc., which also owns the Burger King and Tim Hortons chains.

Previously, Bachelder had served as chief concept officer for KFC, a division of Yum! Brands Inc., and also had leadership positions at Domino’s Pizza, RJR Nabisco, The Gillette Co. and Procter & Gamble.

The Chick-fil-A board appointment was first reported Monday by Mark Kalinowski, president and CEO of Kalinowski Equity Research, noting that Bachelder’s biography recently appeared on the Atlanta-based company’s website.

“From Chick-fil-A’s perspective, this looks like a fantastic addition to its board of directors,” Kalinowski said in a note. “Bachelder has held the top spots at both KFC and Popeyes Louisiana Kitchen, two of the largest quick-service chicken concepts in the U.S.”

Kalinowski noted that, under Bachelder’s leadership, “Popeyes Louisiana Kitchen experienced a highly successful turnaround before it was acquired by Restaurant Brands International.”

Bachelder chronicled her Popeyes’ servant-leadership approach to management in her book, “Dare to Serve: How to Drive Superior Results by Serving Others.”

She and Jones join other Chick-fil-A board members who, apart from the Cathy family members, include: Michael Duke, retired president and CEO of Wal-Mart Stores Inc.; Brent Fielder, a Chick-fil-A franchise operator in Birmingham, Ala.; Crawford Loritts Jr., pastor of Fellowship Bible Church in Roswell, Ga.; and Steven Reinemund, executive in residence at Wake Forest University and retired dean of that university’s business school.

For the upcoming Nation’s Restaurant News Top 200 report, privately held Chick-fil-A has reported fiscal year 2018 U.S. systemwide sales of $10.46 billion, up 16.7% from the prior year.