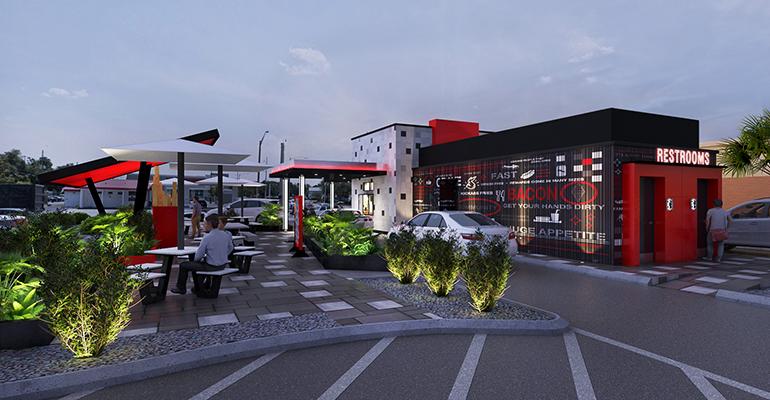 Checkers and Rally’s Restaurant of the Future will include a contemporary look and kitchens that have been revamped for efficiency.
News>Quick Service

Checkers & Rally’s ‘Restaurant of the Future’ will debut new look, inside and out

Checkers Drive-In Restaurants is preparing to begin rolling out a “Restaurant of the Future” prototype that features a new look, a digital-only drive-thru lane and revamped kitchen with several new pieces of cooking equipment, president and CEO Frances Allen said this week.

The Tampa, Fla.-based operator and franchisor of the Checkers & Rally’s drive-thru chain recently received a $20 million investment from owner Oak Hill Capital Partners IV, which will be used to get the new format off the ground as part of an aggressive five-year growth strategy, said Allen.

She described the new look as bold and contemporary, “while still honoring the brand’s iconic image,” but the kitchen overhaul may be the most significant element of the redesign.

“We've got a whole new engine — which is what we call our kitchen — that we are testing, and in a fairly major way,” she said, citing a new layout that seeks to improve efficiency and the environment for workers.

Among the most significant changes, new clamshell grills will replace the current flattops, as part of an effort to speed throughput and minimize opportunities for human error. A new revamped fry station is also part of the redesign. The company declined to disclose other elements of the kitchen remodel.

Much of the kitchen equipment has aged out and had been in frequent need of maintenance, Allen said, and in addition had not always been optimally configured.

In four locations where the new equipment has been installed as a test, the company has been “extremely encouraged” by the results, she said.

“The improvements in the guest experience, the speed of service and even same-store sales are material,” said Allen. 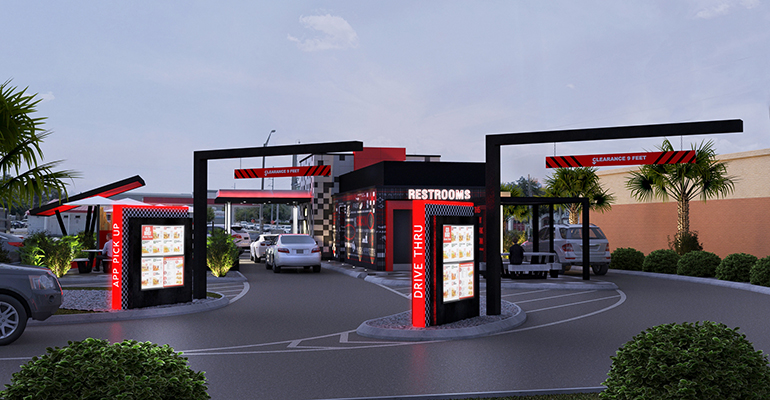 The new prototypes feature a drive-thru lane dedicated to digital orders and will retain some classic elements of the brand’s image.

The new look on the outside of the buildings features a stylized version of the black-and-white checkered pattern that the brand is known for, according to artists’ renderings, along with a more modern look for the patio seating areas and other artistic flourishes.

The drive-thru lanes are also getting an update that reflects the current off-premise environment. One of the two lanes in the chain’s standard double-drive-thru format will be dedicated to orders placed either through the mobile app or via third-party delivery firms.

A handful of locations have already converted one of their drive-thru lanes to fulfill digital orders only, Allen said.

In addition, the walk-up windows will get better lighting, there’s a new seating area for customers waiting for orders to be fulfilled, and a QR code display for downloading the menu.

The first Restaurant of the Future is scheduled to open in Lakeland, Fla., this summer, and another six are planned by year-end.

“If it plays out the way we're expecting, we'll start rolling out to other company restaurants and offering up to franchisees starting in 2022,” Allen said.

She declined to disclose the costs of the building the Restaurant of the Future.

“Obviously, it's not a cheap undertaking,” she said. “But it's something that we believe is very important for a sustainable future growth.”

The $20 million investment from Oak Hill Capital Partners also signals support for the effort, she said.

The investment and remodel plans follow a year in which the chain drove same-sales gains of 7.5%, signed on 40 new franchise operating partners and secured 70 new locations for store development, the company said at a recent investment conference. The chain currently has 836 locations.

In 2020, customers gravitated to the contactless, off-premise experience offered by the drive-thru format, Allen explained.

“At Checkers we've actually been extremely fortunate,” she said. “It’s kind of hard to say that with everything that's going on around us.”