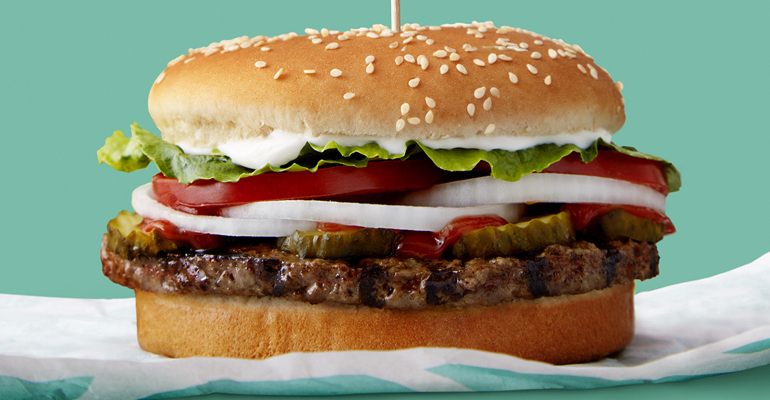 Burger King plans to roll out the vegan Impossible Burger patty across the country as an option on its signature Whopper sandwich by the end of 2019, the Miami-based company said Monday.

The quick-service burger chain started testing the Impossible Whopper at 59 locations in St. Louis at the beginning of April at a suggested price of $5.49, which is $1 more than the regular Whopper.

Impossible Foods launched the Impossible Burger in 2016 with a distinct ingredient intended to make the product bleed like actual hamburger. That ingredient, heme, is a protein found in hemoglobin, but the Silicon Valley-based company derived it from plants to make the product vegan. The original Impossible Burger was based on wheat program, but the new version introduced earlier this year is gluten free, with the primary ingredient being soy protein concentrate. It also has coconut oil, sunflower oil and assorted binder, vitamins and preservatives. It has 30% less sodium and 40% less fat than the original recipe while still having as much protein as 80% lean ground beef.

The Impossible Burger also has as many calories as ground beef, but a much lower impact on the environment, according to Impossible Foods, which says its product requires 96% less land and 87% less water than ground beef and results in 89% fewer carbon emissions.

Burger King, with more than 7,200 locations In the United States, would be the largest chain to date to have rolled out the Impossible Burger nationwide, but it has also been introduced systemwide to the 570 locations of Red Robin Gourmet Burgers and Brews and White Castle’s 400 units.

Carl’s Jr., with around 1,100 locations, introduced a vegan sandwich from another producer, Beyond Meat, systemwide at the beginning of 2019.

Update April 29, 2019 This story has been updated with pricing information for the Impossible Whopper.