/sites/all/themes/penton_subtheme_nrn/images/logos/footer.png
Recent
Recent
The first round of Restaurant Revitalization Fund grants is about to be distributed
May 10, 2021
Sam Oches named Editorial Director, Editor in Chief of Nation’s Restaurant News and Restaurant Hospitality
May 10, 2021
Working Lunch: Labor shortage developing into a political challenge for industry
May 07, 2021
Urban restaurants slow Shake Shack’s recovery
May 07, 2021
How the CEO of White Castle is making the work environment inclusive
May 07, 2021
Featured
Subway names Donagh Herlihy as chief digital and information officer
May 03, 2021
Taco Bell is testing out a new vegetarian protein
Apr 23, 2021
BJ’s plots expansion of Beer Club, virtual Slo Roast brand
Apr 23, 2021
How Taco Bell is going to start recycling its hot sauce packets
Apr 19, 2021
News>Quick Service

After a decades-long hiatus, ‘the Noid’ is back in Domino’s ads, mobile games 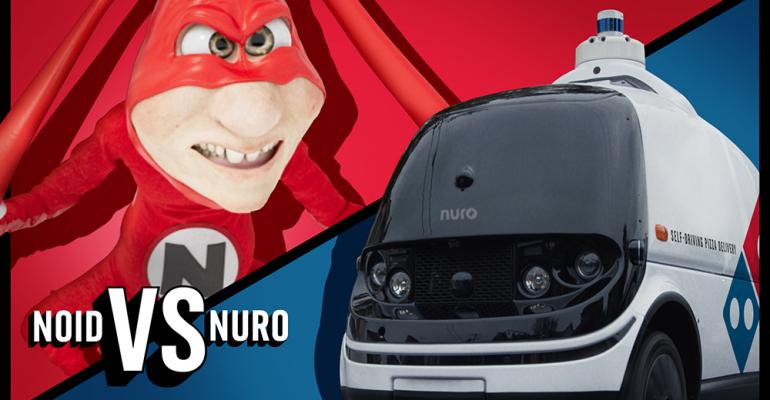 As Domino’s makes steps to forward its brand by embracing artificial intelligence and robots, its long-term nemesis the Noid is back to cause havoc, the chain announced Monday. A new campaign will feature the Noid and Nuro, the autonomous pizza delivery robot — both will have television spots and mobile gaming spots.

Originally from a 1986 Domino’s ad, the Noid has been attempting to stop the Ann Arbor, Mich.-based company’s pizza deliveries for almost 40 years. The Noid’s latest enemy is Domino’s new delivery robots.

In mid-April, the quick-service chain announced a partnership with autonomous robot company Nuro for self-driving pizza delivery in Houston. Ads with the Noid show it using a jackhammer to ruin the street ahead of Nuro and appearing sneaky on the verge of causing havoc.

“The Noid is Domino’s oldest and most famous villain, and the pizza delivery testing we’re doing with Nuro’s autonomous vehicle is exactly the kind of technology innovation that could provoke the Noid to return,” said Kate Trumbull, Domino’s vice president of advertising, in a statement. “However, after 35 years of practice in avoiding the Noid, we're pretty confident we know how to defeat it.”

The new campaign isn’t just television ads. For 2021, the Noid is coming to the device most people rely on for everything: cell phones.

Beginning May 7, the Noid will join the Crash Bandicoot gaming series, Crash Bandicoot: On the Run, a new mobile-based adventure based on Domino’s history.

Domino’s is not the first brand to partner with the gaming industry. Wendy’s let fans watch its livestream on Twitch and made its heroine, Wendy, an avatar in the video game Animal Crossing last year.

In addition to the ads and game collaboration, the pizza chain announced a new merchandise line available via Amazon that includes two t-shirts and a tumbler. All proceeds will go toward the Domino’s Partners Foundation, an independent internal nonprofit organization that provides financial assistance to Domino’s franchise and corporate team members in need.

Gifs in partnership with the company Giphy will also be available across Facebook, Twitter, Instagram, Snapchat and TikTok for fans who may not have been around in the 1980s.

Click through the gallery for some stills from the new campaign and details on the merchandise.