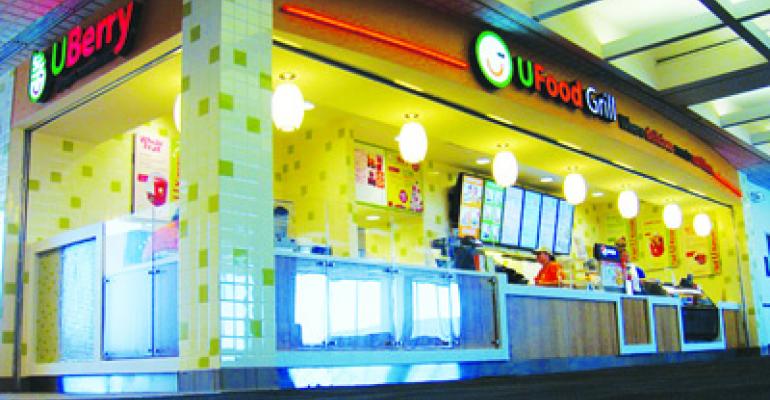 UFood Restaurant Group, which operates and franchises eight UFood Grill units, has signed a joint-venture agreement with an investment group of military veterans to open restaurants on U.S. Army and Air Force bases.

UFood president and chief operating officer Charlie Cocotas said the investment group, MBUF, would provide the financing and take a 49-percent interest in the fast-casual units that open on bases. The first three are slated to be built at the Army’s Aberdeen Proving Ground in Maryland.

The first restaurant is scheduled to open within 60 to 90 days in one of the base’s main buildings, where about 3,000 people work, Cocotas said. The contract was part of a drive by the military to provide more nutritious meals to its personnel, he added.

Another unit will open in a separate main building on the base, and a third will be located inside the entrance of the base’s Post Exchange, or PX, which will be open to military personnel and visitors, Cocotas said.

The Army-Air Force Exchange Services, or AAFES, has approved UFood, potentially allowing it to open on any base in the world operated by those armed forces branches, Cocotas said.

“Since we began planning for Aberdeen, we realized that the military could represent a significant growth opportunity for us, given our national focus on nutrition and the well-being of our military,” UFood chief executive George Naddaff said in a statement. “Our partners in this, military veterans with distinguished careers, are uniquely suited to guide us through this expansion. We look forward to our upcoming opening at Aberdeen and to creating new opportunities together.”

MBUF partner Francis Shea added: “It is clear that healthier dining options are being mandated by the military leadership, their soldiers and their families. As we have begun meeting with bases to discuss the concept, we’ve received an overwhelmingly positive reception. Bringing the UFood Grill concept to military installations will give our military and their families access to better-for-you food served fast, a perfect fit for the military lifestyle.”