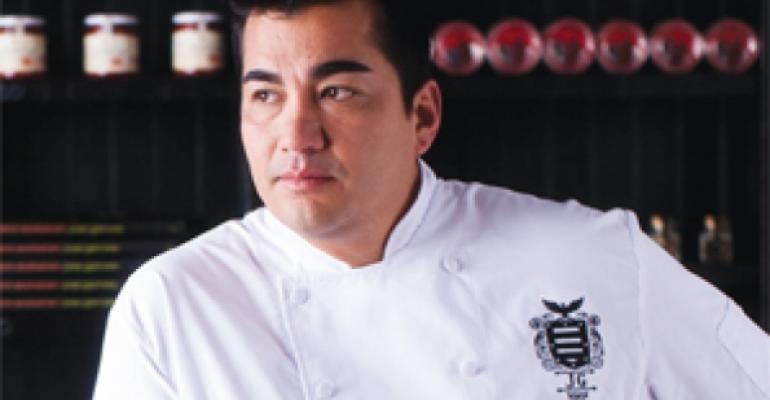 A call to José Garces March 5 found the 39-year-old chef-restaurateur surprisingly relaxed. Three days after opening the first of three new Atlantic City, N.J., restaurants in as many weeks, Garces is not only on time for the call, he speaks at a pace conveying a sense of having all the time in the world.

Which clearly, he doesn’t. As the owner of Philadelphia-based Garces Restaurant Group, he owns and/or operates 16 restaurants, a catering company and food truck operations in multiple cities. As a past Food Network Iron Chef, he’s a sought-after TV personality and cookbook writer, plus his passport has more stamps than a criminal on the lam.

And yet friends and colleagues scattered across the country say he always has time, whether they’re visiting him or hosting him, to connect with people and things and places that matter — before disconnecting again to jet abroad, research and develop a new idea, and ultimately, create a new restaurant concept.

“I guess I’m driven by what food is at its roots and what it can be,” Garces said. “The travel part is really important to picking up authenticity and experiencing different flavors, cultures and cuisines. …But to do that, I rely a lot on key personnel who help me grow the company and develop all these concepts. I can’t do that on my own.”

All, he said, are manifestations of his insatiable curiosity about food and love of travel, dual passions he indulged following graduation from the culinary program at Chicago’s Kendall College in 1996.

“Culinary school helped me find myself and gave me direction, but after that, I really wanted to go to Europe and see those chefs’ approach to cooking,” said Garces, who has been to Japan, Singapore, China, Spain, England, Mexico, Peru and throughout the Caribbean. “I can’t tell you how fortunate I feel to have experienced all that.”

Douglas Rodriguez, chef-owner of four restaurants — including Alma de Cuba in Philadelphia, where Garces worked 16 years ago — said Garces’ investment in globetrotting has been essential to his grasp of so many cuisines. Yet Garces’ reinterpretation of those foods, Rodriguez added, is inspired.

“His food is very original because he puts an innovative touch to everything he does,” Rodriguez said. “He has that skill for taking a classic dish and making it better. That’s a true talent of his.”

He began honing that capacity growing up in Chicago and cooking with his Ecuadorean mother and grandmother, Amada, for whom he named his first restaurant. Like many of his high school friends, Garces envisioned a career in business before surprising them with his decision to go to culinary school.

“A lot of us scratched our heads when he said, ‘I’m going to be a chef,’” said Joe Erlemann, a high school friend. “But he had that vision early on and was entirely motivated to do it. He didn’t spend a lot of time wasting time back then, either, and now he’s moving a million miles a minute.”

Garces’ college roommate, Sean Glascott, recalled how Sundays saw the budding chef collecting their friends’ money in order to make a group meal and get some cooking practice.

“Instead of us pitching in to buy pizza, he’d get the money together to do the shopping and the cooking, and treated it like a culinary school project,” said Glascott. “Once people started hearing about it, more people started showing up, and then it got too big.”

Upon leaving Kendall, Garces cooked at several restaurants in Spain and France before returning to the U.S. for work in New York. He soon teamed up with Rodriguez at Alma de Cuba and impressed the groundbreaking “nuevo Latino” chef, who then made him opening chef at two more restaurants. When Garces set out to open Amada, Rodriguez said he knew Garces would make an impact on the American restaurant scene, though not just for his food.

“Developing menus and recipes was just one of his talents,” Rodriguez said. “But he has the ability to use both sides of his brain. There are lots of chefs who have the creative ability they need, but they have no business sense. José has both. He’s one in a million.”

Marc Vetri, chef-owner of Vetri in Philadelphia, became friends with Garces when he worked at Alma de Cuba, and recognized that “José was one of those guys you just knew was only working for someone else to learn the missing parts of what he needed to open up his own restaurant. The way he talked about the business was different from most guys. You knew it was going to happen.”

Vetri, after opening three restaurants in eight years, said he’s “just blown away” that Garces has opened five times that number in seven years and is still planning to open more in 2012.

“About six months after he opened Amada, he says to me, ‘I’m thinking about a second restaurant,’ and he’s already mapped out his whole plan to roll out four in four years,” Vetri added. “I told him, ‘I wish I could think like you do, but I just can’t.’ Very few people are able to do that.”

Garces said he never envisioned achieving such success so quickly, though opening Amada helped him see the possibilities for other concepts. Still, when asked to recall his career dreams of 20 years ago, he’s quicker to remember his struggles than any private aspirations.

“Had you told me years ago — when I was toiling as a chef de cuisine and trying to etch out a piece of a restaurant career for myself — that this would happen, there’s no way I’d have believed you,” Garces insisted. “Here’s a moment in my career that’ll give you an idea of what I was thinking back then: After culinary school I was cooking at a restaurant in Spain where the chef asked me to clean these baby eels — about a thousand of them in a bucket, all one-third the size of my pinky, still alive and swimming. I felt so small at that moment. That’s what sticks with me.”

Such humility is typical for Garces, said Glascott. “Everything about José and his business has grown except for his head — there’s no ego,” Glascott said. “It sounds crazy, but he’s the same guy we all went to high school with. It’s so rare to find somebody that can succeed like that and not let it get to them in the wrong way.”