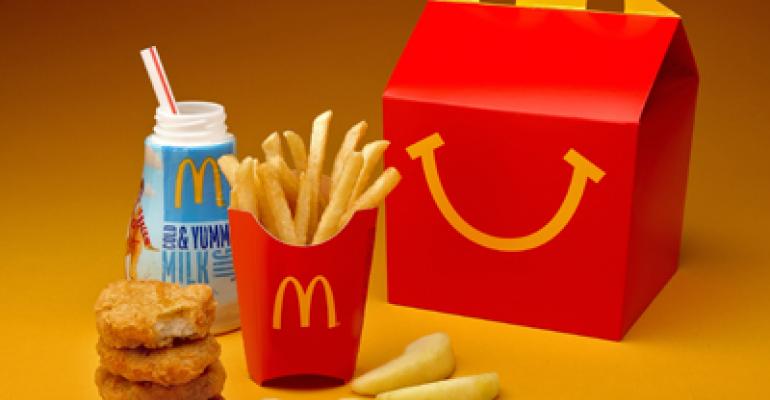 Responding to mounting pressure to offer more healthful options, particularly for kids, McDonald’s set new goals on Tuesday to reduce sodium, added sugar and saturated fat across its menus, as well as to include more fruit and fewer fries in all Happy Meals.

Jan Fields, president of Oak Brook, Ill.-based McDonald’s USA, said the chain has spent the past few months developing ways to improve the nutritional quality of menu items in response to consumer demand.

Additionally, the company is planning a nationwide tour of town hall-type meetings, where McDonald’s officials will listen to consumers and nutrition experts about how they would like to see the menu changed.

“Right now, America is having important conversations about childhood obesity,” Fields said. “McDonald’s is part of those conversations.”

Responding to criticism
As the nation’s largest burger chain, with more than 14,000 U.S. units, McDonald’s has come under fire for contributing to the nation’s obesity problem, especially among kids.

In California, McDonald’s faces a lawsuit charging that its practice of offering toys in Happy Meals unfairly lures kids to make poor nutrition choices — although the company’s announcement Tuesday may impact that legal challenge.

San Francisco and Santa Clara counties in California have banned toys in kids’ meals that don’t meet certain nutritional standards. And a group of federal agencies has proposed strict nutritional standards for food marketed to kids in guidelines expected to be finalized later this year.

Fields said McDonald’s has already added many more healthful options to its menu, but that the time has come to take more action.

In September, McDonald’s will begin rolling out revamped kids’ meals that include apple slices — without caramel dipping sauce — as a standard item.

The chain will reduce the serving of fries in kids’ meals from a 2.4-ounce portion to a 1.1-ounce portion, bringing the number of calories down by 20 percent and taking all Happy Meals under 600 total calories.

Marketing to kids
The changes also meet new stricter standards recently announced by the Children’s Food and Beverage Advertising Initiative, or CFBAI, a voluntary program developed by the Council on Better Business Bureaus, to respond to the call for responsible food advertising to children.

McDonald’s and Burger King have agreed to market to kids only menu items that meet nutrition standards set by the CFBAI.

In addition, Fields said McDonald’s has set a goal of reducing sodium across its menu 15 percent by 2015.

And by 2020, McDonald’s will develop plans to further reduce sodium, as well as added sugar and saturated fat.

Meeting those goals will mean changes in portion sizes as well as new menu innovations, Fields said. To ensure that the brand is meeting its goals, McDonald’s will use an unidentified third-party to measure its progress.

The chain will also establish a Kids’ Food and Nutrition Advisory Board of parents and nutrition experts to develop nutrition marketing messages and programming for kids.

Fields noted ways that McDonald’s has already made changes over the past decade.

In 2003, the chain reduced sodium in chicken nuggets by 13 percent, and apple slices with caramel sauce have been an option in kids’ meals since 2006 as an alternative to fries.

Last year McDonald’s added oatmeal as a breakfast option, and this year the menu includes smoothies, including most recently a mango pineapple version introduced in June.

Fields said the Happy Meal revamp roll out is expected to be complete by the end of the first quarter next year.

Planned current nutritional changes, however, do not include developing vegetarian or vegan options, Fields said, but added, “We’re open to it.”

She added that the group would talk about how the changes might impact their lawsuit, which addresses how McDonald’s markets to kids. But ultimately the goal was to see menu improvements.

“We certainly wouldn’t have brought the suit if kids’ meals were healthy,” she said.

Wootan said including fruit and fewer fries as a default option is important as it subtly changes consumer perceptions about what a kids’ meal is.

Under the new plan, parents can still ask for a double portion of apples and no fries.

McDonald’s said Tuesday that an estimated 88 percent of the chain’s customers were aware that apples were an option, but only 11 percent selected fruit instead of fries.

Wootan, however, said CSPI research has found that many McDonald’s locations don’t make it clear that apples are an alternative in Happy Meals.

“They just throw those fries in the bag without asking,” she said.

The new Happy Meals will include a smaller serving of apples, totaling a quarter cup, or a half serving of fruit.

“That’s a pretty tiny serving, considering kids should be making fruit half of their plate,” she said.

“McDonald’s has continued to evolve its menu and I look forward to hearing about the progress of today’s commitments, as well as efforts in the years to come,” Obama said in a statement.