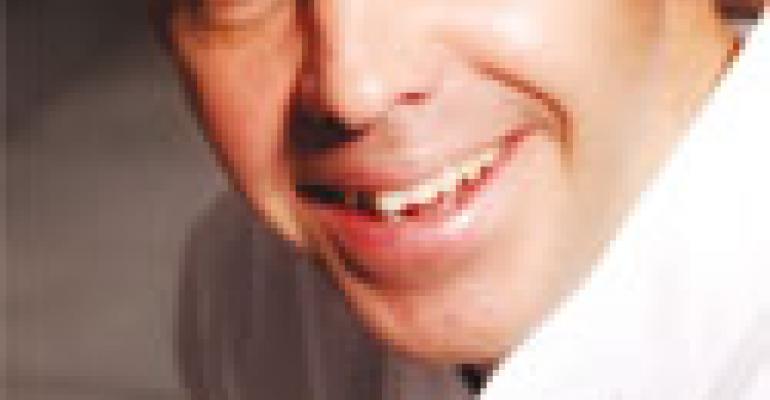 Plying an array of kitchen equipment that includes both cutting-edge and traditional pieces, executive chef John Tesar is leading the newly remodeled and reopened restaurant of the Rosewood Mansion on Turtle Creek into a distinctive new chapter.

Tesar took the helm of the Dallas fine-dining icon in October 2006, stepping into the large shoes left empty by Dean Fearing, the pioneering Southwestern chef whose 21-year tenure ended when he left to open an eponymous dining spot in the new Ritz-Carlton Dallas. Tesar, who was fresh from rm restaurant in Las Vegas, replaced Fearing’s vaunted regional fare with the simple but creative contemporary American cuisine that has won him plaudits in kitchens there and in New York City, the Hamptons and Lake Tahoe.

He also presides over a setting quite different from that of his predecessor. In a multimillion-dollar makeover that lasted from June to mid-October, The Mansion Restaurant was remodeled to burnish its standing in the increasingly competitive Dallas fine-dining market. The 70-seat spot sports new modern lighting, honey-colored walls and exposed ebony wood tables.

Out along with the tablecloths is the formerly strict dress code. It’s “a more spontaneous restaurant” now, as Tesar put it, but not a casual one, with entrées priced in the $22 to $54 range. Brand new on the scene is the Chef ’s Room, a separate 20-seat, white-tablecloth restaurant-within-a-restaurant with a three-course, $89 prix-fixe menu.

“This equipment has definitely helped me to organize the two lines and fit everything I need,” he said.

The workhorses for the Chef’s Room are a trio of Jade flat tops, heavy cast-iron cooking platforms.

“I can cook for 10 or 15 people at a time, almost the whole seating, on those flat tops,” Tesar said.

Not only do the flat tops fit more pots and pans than open-burner ranges, they have variable temperature zones for precise heat control, enabling quicker cooking and plating.

“When the food is served, it has really been on the plate only two or three minutes, which is novel for a hotel or semi-high-volume restaurant,” Tesar said.

Tesar uses a TurboChef oven, which employs a combination of forced hot air and pulsing microwaves to prepare halibut, quail and lamb in a fraction of the time conventional equipment takes. Quail, for instance, comes out crisp outside and rosy in the center in just three minutes. He noted that the device’s programmable cooking cycles enable even an inexperienced cook to get consistently good results.

For sous vide preparation of lobster or short ribs, Tesar uses a Berkel vacuum machine for sealing the bags and PolyScience thermal circulators or Winston Cvap cook-and-hold ovens for cooking. He chooses the latter for large-quantity production.

“I can put in 20 short ribs and cook them for seven hours under pressure at 60 degrees Celsius,” he said. “You would need five circulators to do that.”

Even so, he favors “visceral, day-to-day cooking” methods over vacuum techniques.

“I like to smell and feel the cooking,” Tesar said.

The tab for all the new equipment was less than $100,000, Tesar said, noting that one piece was donated by a manufacturer and some others were “bargain shopped.”

Compared to some of his earlier kitchens, his new setup is “a dream come true,” Tesar said, adding, “Remembering the restaurants that I built on a shoestring and having all this stuff now, it’s crazy.”