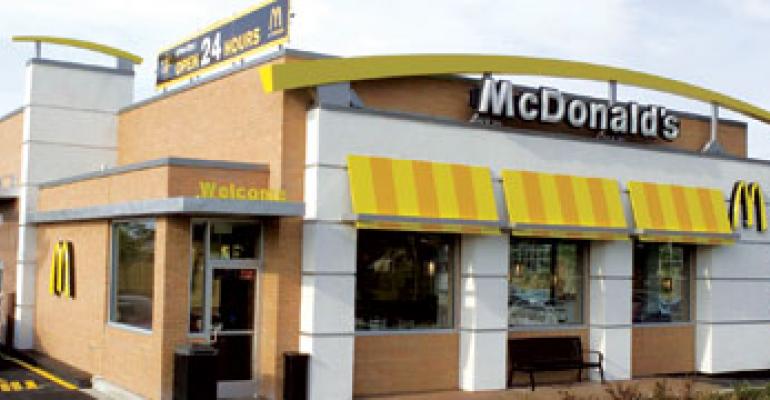 Heard on the call: McDonald’s Corp.

Executives at McDonald’s Corp. told analysts Monday it would likely raise menu prices this year to keep up with increasing commodity costs.

The company offered outlooks on the year ahead after reporting a 2.1-percent increase in fourth-quarter net income on positive sales despite severe winter weather. Click here to read more on McDonald’s latest results.

The company expects domestic commodity inflation between 2 percent and 2.5 percent in 2011, and chief financial officer Pete Bensen said McDonald’s likely would take price increases to offset some of that pressure.

“Our goal is to provide predictability and stability in our pricing,” Bensen said. “We look at our basket of goods region by region, and in the U.S. we have more opportunity to lock in costs. We’re about as locked in today as we were a year ago, and we have a lot of confidence in the 2-to-2.5-percent increase.”

Commodity prices are expected to rise about 3.5 percent to 4.5 percent in Europe, McDonald’s said.

In 2010, the company kept prices flat in the United States, Bensen said. Prices rose about 3 percent last year in Europe, with much of the inflation happening in Russia and slightly lower increases in Germany and the United Kingdom. The Asia/Pacific, Middle East and Africa, or
APMEA, region passed along a 1-percent menu price increase fairly evenly throughout the division.

He added that the biggest commodity variable in 2011 would be beef, both in the United States and in Europe, where there is “typically less opportunity to lock in and hedge across the continent.”

“With the U.S. at 2 percent to 2.5 percent, we feel good about our ability to raise prices where it makes sense to do that,” Bensen said. “But growing traffic is very important. We’ll look to balance driving traffic with recovering our input costs.”

Chief operating officer Don Thompson added that McDonald’s monitors not only commodity price fluctuation. but also prices for food at home versus food away from home to calculate the amount of price increase the company could take.

“We had a 1.3-percent increase in food away from home prices [in the United States] but only a 0.2-percent [increase] in food at home, and we have to be flexible around those points,” Thompson said. “In the rest of the world it varies. … We have to take into account market by market those individual circumstances for food at home and away from home, and then maintain our proposition, which is about stability, especially around our value menus.”

In order to protect its profit margins and grow earnings in the face of increased costs and a slow macroeconomic recovery, McDonald’s has projected that a same-store sales increase of 2 percent to 3 percent would be needed in the United States and a gain of at least 3 percent would be necessary in the European division, Bensen said.

One analyst on the conference call Monday asked whether achieving those same-store sales increases would be harder given difficult comparisons caused by 2010’s successful beverage introductions like McCafe Frappes and Real Fruit Smoothies, but Thompson expressed confidence that the beverage program still would generate new benefits in 2011.

“It was only a few years ago that coffee was 2 percent of sales, and now it’s over 6 percent,” Thompson said. “In 2011, you’ll still see some benefit from frappes and smoothies and the way those marketing calendars were structured. We’re not running away from those.”

He noted that consumers still react positively when core products like Big Macs and McNuggets are promoted and added that operational initiatives — like 400 units expected to be remodeled by the end of the first quarter — also would continue to drive same-store sales.

“The United States [system] will begin reimaging more aggressively, and that always gives us a lift,” he said, adding that nearly 40 percent of McDonald’s restaurants in the United States have extended hours. “There’s also more room to grow in drive-thru optimizations, whether they’re side-by-sides or dual lanes.”

A look around the world

Remodelings and new menu items also will proliferate in Europe this year, McDonald’s executives said, as the company leverages the best practices of widespread reimaging happening in France over the past few years. The McCafe beverage platform currently is in place at 1,300 restaurants in the European division.

McDonald’s reaffirmed previously stated development goals for China during the call with securities analysts. The company opened 166 restaurants in China in 2010 and plans to grow its system another 16 percent in 2011, with the goal of 2,000 Chinese restaurants by 2013. As it expands farther out from the coastal cities, drive-thrus will be important elements to new restaurants, the executives said.