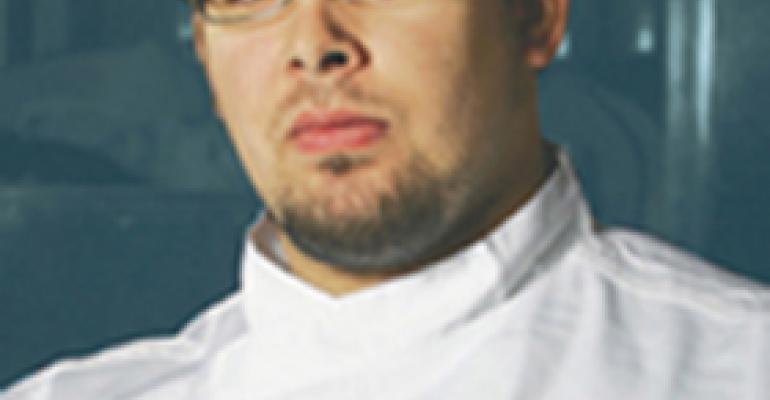 In 2003, 13 years after landing an after-school dishwashing job in Philadelphia, Carmen Cappello became executive chef for the first time in his kitchen career—at the Atlanta Grill in the Ritz-Carlton Atlanta.

The son of an Army chef who had cooked for Gen. Douglas MacArthur, Cappello is also the only one of seven children not to earn a college degree. Though driven by pride and his father’s example, he says he was obliged to prove himself time and again by kitchen bosses who look for culinary school credentials.

After training with chef Jack Shoop at the Governor’s Club in Tallahassee, Fla., and then apprenticing with Georges Perrier at Le Bec-Fin, and with Perrier’s former sous chef Jeremy Duclut at Brasserie Perrier, both in Philadelphia, Cappello spent the next six years integrating his experience with Italian, French, Asian and Southern cuisines at three different Atlanta restaurants.

Then the call came to oversee the multiple kitchens at two-story Sweet Lowdown, an 11,000-square-foot modern Southern dining and special events concept that opened two months ago in the city’s Midtown area. Now 30 years old and managing a staff of 23 at the 380-seat restaurant, Cappello says he is enjoying life and making his family proud.

You say you went to “the culinary school of hard knocks.” What do you mean by that?

I went only a year to community college, with no classroom culinary training. Earlier in my career, when I applied for sous chef and chef de cuisine positions, I was just trying to get people to give me a chance. I’m the only one in my family, except for my father, lacking a college degree. That’s six brothers and sisters from two marriages. So, proving myself and making my family proud have been big. All I had going was a strong interest in cooking, a love of food and a drive to make it.

Where did you get those qualities?

My father was a chef in the Army, and he told a lot of stories and cooked a lot at home when I was a boy. Then I also started working at a neighborhood place called Michael’s Italian Restaurant & Pizzeria when I was 14.

Was your first job a kitchen position?

I started as a dishwasher because I just needed a job after school, but I liked watching the guys on the line make fettuccine Alfredo and spaghetti and meatballs, and that got me interested. After working at Michael’s and a couple of other joints in my area during the next four years, I was hooked because Italian restaurants are like families. By the time I turned 18, I had enough experience to head to Atlanta.

Did you have a mentor in your first kitchen?

I can only remember his first name, Sal, but he taught me to love what I’m doing. He was a part owner [of Michael’s] and worked the line every night. It was he who got me started on this terrific journey. In July, I went back to Michael’s for the first time in 15 years, and Sal shouted at me as soon as I walked through the door. “The big man from Atlanta finally come back to see me!” he said. Those words made me proud.

How do you tell your story as an executive chef today?

I present myself as someone who believes that with determination you can do plenty. I have a bunch of connections. I’ve always made it a point to meet people, build contacts and set goals.

How did these early experiences mold your approach to cooking today?

They taught me the importance of maintaining professionalism and of being honest with myself and my food. I’m not going to cook what I don’t know. And I’m not going to worry about criticism when I’m cooking what I do know.

Do you treat your staff like family, as you learned at Michael’s?

That’s right. When there’s a full dining room and the kitchen is in a good mood, the food going out to the tables is more consistent. That’s an energy booster.

How many are in your kitchen?

Listen to your machine when using a blender or food processor for thickening. As the sound gets lower, the product is getting thicker.

With dishwashers, chef de cuisine and sous chef, the staff totals 23. On a Friday night shift, we run with 14 people. We have two floors and three kitchens, and we can max out with 380 guests in the restaurant, including patios and bars.

Talk about how you integrate Italian, French and Southern influences.

Actually, I created the New South Brasserie using French technique, Asian and Italian flavors, and Southern products when I was at the Ritz-Carlton. I try to focus on Southern ingredients at Sweet Lowdown, buying as much Georgia-grown and Georgia-made product as I can. The menu carries items like redfish niçoise, rabbit pot pie, fried green tomatoes with blue crab fingers, and several signature blue plates.

What’s another ingredient that could adapt to those French, Italian and Asian influences?

One example is a ragoût, where okra would be perfect, actually. Another is Asian salad, where I’d use the okra pickled.

What was the greatest cooking secret you learned from your dad?

He taught me how to make the perfect pepper and egg sandwich using toasted Amoroso bread [from Philadelphia’s famous Italian bakery], lightly stirred airy eggs, really good provolone and fresh ripe peppers from the market, including a cherry pepper every now and then. There’s nothing like it.