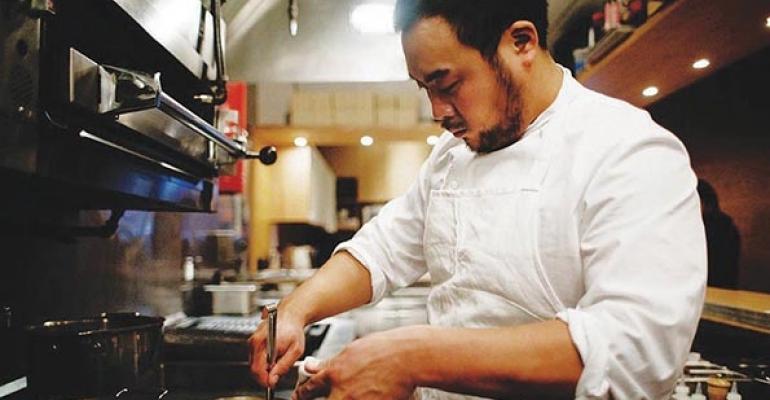 Ramen and pork buns were not things many fine-dining chefs deigned to cook until David Chang came along. But the Korean-American founder of the Momofuku Group has done a lot to shake up notions of what it means to be a chef, and he continues to make waves.

By all accounts, Chang was really just planning to open a straightforward ramen shop when he opened Momofuku Noodle Bar — named after Momofuku Ando, the inventor of instant ramen — in 2004. But as the restaurant started to flounder, Chang, having nothing to lose, started to experiment, upgrading to heritage pork, using local and seasonal produce, and adding to his menu whatever he and his colleagues felt like cooking.

His offbeat style, his farm-to-table message and his restaurant’s good location in the heart of New York City’s trend-forward East Village, started to draw locals and trend makers. Before long Chang had introduced Asian dishes to a crowd of hipsters who wouldn’t have thought to take the walks to Chinatown or Koreatown.

Chefs have made pilgrimages to his restaurants to eat his crispy Brussels sprouts with fish sauce vinaigrette, his green apple kimchi with labneh, his bo ssäm, pork buns and
whatever else he and his team were cooking up.

As the noodle bar and, soon after, Momofuku Ssäm Bar — named for a Korean version of lettuce wraps — prospered, Chang started to transform the way Americans think about fine dining with Momofuku Ko, a 12-seat restaurant (it has since moved to a larger space) in which customers were seated around a central kitchen and served by the chefs.

The reservation process was democratized by only allowing customers to book seats online — new seats were made available at 10 a.m. every day, resulting in a morning ritual by many New York foodies of frantically refreshing their browser screens to find a seat.

With a new fine-dining paradigm developed, Chang and his pastry chef, Christina Tosi, went on to reimagine desserts, turning cereal milk from a thing to be discarded after breakfast into a delicacy to be savored, and creating devotees of Compost Cookies — coffee grounds are an ingredient — and Crack Pie.

Where Chang trod others followed, and fine-dining chefs from Ken Oringer at Uni Sashimi Bar in Boston to Gavin Kaysen at Spoon in Minneapolis now serve late-night ramen. Kimchi has become a common ingredient in kitchens at independent restaurants. And Momofuku Ko’s exclusive, yet informal style has been duplicated by many fine-dining restaurants across the country.

Chang has experimented in other areas, too.

In 2015, he launched Maple, an app-based service that delivers food developed by Chang and other chefs and prepared in a commissary with guaranteed delivery in 30 minutes.

He has stunned cooks by demonstrating how to make a version of katsuobushi — the Japanese bonito flakes that form the base of many of that cuisine’s broths — out of pork tenderloin.

At his restaurant Má Pêche, he was one of the first non-Cantonese restaurants to offer dim sum-style service.

He also has an award-winning magazine, Lucky Peach (which is how “momofuku” would be literally translated).

David Chang continues to adapt with the times and experiment with new ventures, and other chefs continue to watch, and sometimes mimic, what he does, making him a powerful influence on the restaurant industry.