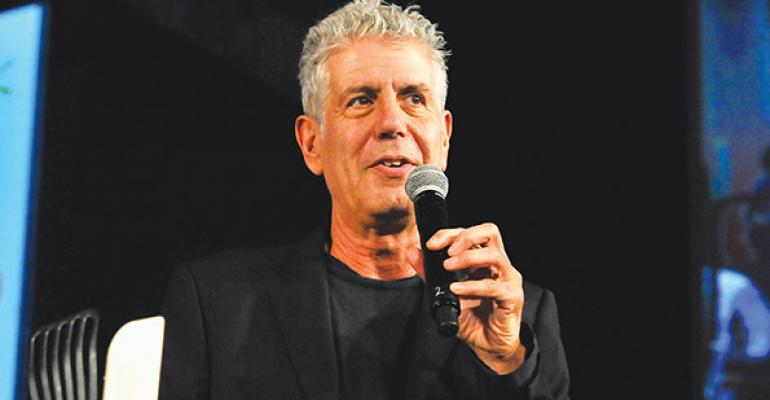 Rebel, writer and insatiable seeker of the unknown, Anthony Bourdain is responsible for bringing the outsider element to the forefront of the previously PG-rated celebrity chef boom of the last decade.

Famous for his sharp wit and acerbic tongue, Bourdain first shook up the restaurant industry with his hilariously caustic 2000 memoir Kitchen Confidential. Pulling back the shimmery, family-friendly curtain put in place by Food Network stars like Rachael Ray, Bourdain exposed what was really going on beyond the kitchen doors of America’s restaurants.

It certainly wasn’t pretty, but his tales of sex, drugs and general lawlessness in the kitchen catapulted the chef to rock star status, which he further cemented as host of the beloved Travel Channel series “No Reservations” and its 2013 CNN reboot “Parts Unknown.” Showcasing cultures, cuisines and communities everywhere from Boston to Beirut, he’s become the restaurant industry’s ambassador to the world’s less traveled culinary trails.

With Bourdain Market — a massive, Singapore-style food bazaar scheduled to open at Pier 57 on Manhattan’s West Side in 2017 — he aims to bring some of those global flavors, as well as the people responsible for them, back to the states.

“Think of an Asian night market,” he told The New York Times. “I want to create for New York some place where I would want to eat. Right now, there is nothing like that.”

In other words, this isn’t the food court at your local mall.

Finally, for critics who argue that the trash-talking anti-vegan has gotten soft in his age and fame, see his recent ongoing spat with bleach-blonde celebrity chef Guy Fieri, and rest assured that he’s still causing trouble.