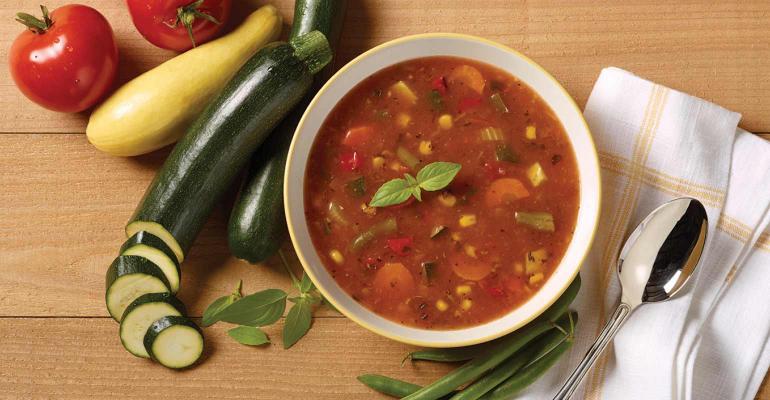 A place at the table

Going veggie, at least some of the time, is hot now. In an effort to eat more healthfully, consumers, especially millennials, periodically order meatless foods — even if those diners have not sworn off meat. Operators are filling this demand by menuing tasty vegetarian and vegan soups made with premium ingredients and innovative flavors.

According to a Nielsen global survey, 39 percent of U.S. consumers say they are trying to incorporate more plant-based foods into their diets. That is a significantly higher percentage than the 6 percent who follow vegetarian diets, and 3 percent who pursue vegan diets. Among the chief reasons for the switch: Eighty-three percent said it was to improve overall health and nutrition, 62 percent cited weight management, and 51 percent are looking to eat clean.

“People are trying to be more healthy,” says Brian Swenson, owner of Three Sisters Cafe and Catering in Denver. “You get your vegans coming in; you have your vegetarians, and then you have people looking for good-tasting fresh food.”

Of the rotating selection of eight soups menued by Three Sisters each day, one or two are vegan and three are vegetarian. Earlier this spring the most popular soup was Cauliflower Curry Coconut, made with cauliflower, onion, garlic, curry paste, curry powder, cumin, fresh cilantro, a vegetable base, and coconut milk to make the vegan soup creamy. The vegetable base is important, Swenson says, because people who order vegan or vegetarian soups do not want chicken stock.

According to the Mintel study, “The Protein Report: Meat Alternatives – US January 2017,” taste is the top reason why U.S. adults eat plant-based proteins (52 percent), outranking concerns over health (39 percent), the environment (13 percent) and animal protection (11 percent).

At the Cleveland location of the steakhouse concept Urban Farmer, two popular vegetarian soups are Roasted Corn Soup with roasted corn, corn churro, micro cilantro and cotija; and Chickpea Soup with English peas, kale and paprika. “Starting off your meal with a bowl of vegetable soup can give your health a boost,” says executive chef Vishwatej “Vishu” Nath. “Vegetable soup can help fill you up without a lot of calories and meet your recommended vegetable intake of two to three cups per day.”

In order to make a soup that appeals to vegetarians and meat lovers alike, Nath prepares a rich vegetable stock with aromatic vegetables such as onions, carrots and celery. He suggests adding a flavorful accompaniment such as pesto, harissa or flavored oil. “Use tamari or soy and spice it up with some flavorful spices,” he says. “Finish with parsley, corn and thyme. They are a marriage made in heaven.”

Vegetarian and vegan soups are a great way to showcase seasonal ingredients. At Urban Farmer Denver, the Yellow Split Pea Soup with Espelette, cilantro and hemp oil is a coconut-based soup prepared with vegetable stock, ginger, Fresno chile, celery and white onion. “I think it is popular because it is an approachable take on a classic, which uses an ingredient like yellow split peas to highlight the season,” says Executive Chef Chris Starkus. “In addition, it is a growing trend for us at Urban Farmer Denver to have vegan and vegetarian options daily so that a special request is not needed to dine with us.”

Seasonal flavors also inspire the soup selection at Conshohocken, Pa.-based Saladworks. Soups are available as a stand-alone entrée or as a side to a Signature or Create Your Own Salad, and some stores serve as many as 10 soup varieties. “The key to success for our stores that sell the most soup, with some boasting upwards of 30 percent in soup incidence, is offering something that appeals to everyone,” says President and Chief Executive Patrick Sugrue.

For example, Sugrue says, the Organic Vegetarian Harvest Bisque features sweet potatoes, apples and rosemary, and pairs well with seasonal offerings in the fall. In the spring the Vegetarian Tomato and Feta soup was a popular complement to the seasonal OM salad.

From millennials to baby boomers and beyond

Millennials are eager consumers of plant-based foods. Research from Ypulse notes that among the top food trends that 13- to 34-year-old foodies said that they were interested in trying in 2017, vegan was ranked third, behind fusion/hybrid foods and fancy baking/crazy desserts, and ahead of meal-kit services.

Other consumers are inspired by health and nostalgia. “Baby boomers and Generation X were brought up hearing, ‘Eat your vegetables,’” says Bob Sewall, executive vice president of Fall River, Mass.-based Blount Fine Foods. “There is a sense of comfort and knowledge around vegetarian foods.”

Sewall says the company has fielded more calls than usual over the past year for vegetarian and vegan soups. Operators look to these high-quality, flavorful, prepared soups as a way to save time and labor in the kitchen, and also to generate good margins. Consumers expect to pay more for high-quality soups full of vegetables and flavor, he says, especially if the soup is organic.

Whether it’s vegetarian or vegan, soup made with premium ingredients and innovative flavors can appeal to consumers with many different food preferences.