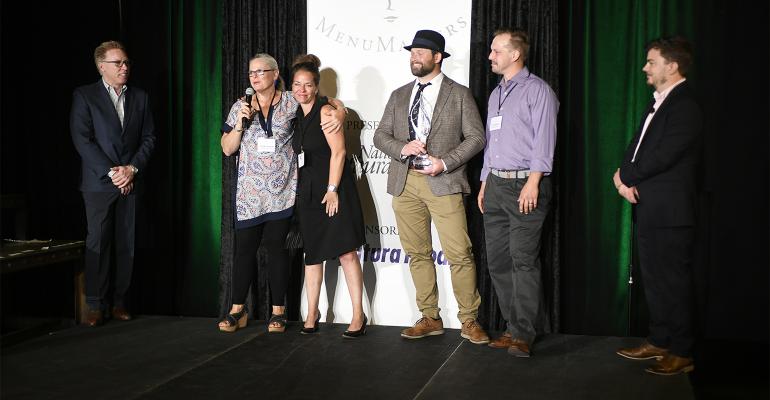 Randy Pfizenmaier
Jennifer Jasinski was inducted into the MenuMasters Hall of Fame.
News>People

MenuMasters celebrations return with two years’ worth of awardees

Winners had waited nearly two years to be fêted in Denver

“It’s good to be out. It’s good to see people. It’s good to be seen!” said Amy Alarcon, vice president of culinary innovation for Popeyes Louisiana Kitchen Monday as she accepted the 2020 MenuMasters award for best new menu item for the chain’s chicken sandwich, which was launched in 2019, drove sales through the roof and inspired dozens of imitations at chains across the country.

Alarcon had been waiting for nearly two years to accept the award which honors culinary innovation at restaurants.

At a party held at Mile High Station in Denver, thrown by Nation’s Restaurant News and sponsored by Ventura Foods, guests sampled dishes like tortelloni with artichoke-goat cheese mousse in white truffle brodo with queso de mano and chervil from Rioja restaurant, chicken liver mousse with fig jam and crostini from Ultreia and Maine lobster rolls with celery aïoli and lettuce on griddled split-top buns from Stoic & Genuine — all restaurants that are part of Crafted Concepts, founded by Jennifer Jasinski, who was inducted into the MenuMasters Hall of Fame that night.

Jasinski has won many awards over the years, including “chef of the year” or the equivalent from Denver Magazine, the Denver Post, Eater, 5280 magazine and Restaurant Hospitality. Her restaurant Rioja was inducted into Nation’s Restaurant News’ Fine Dining Hall of Fame in 2011, and in 2013 she was the first Denver chef to win the James Beard Foundation Award for best chef in the Southwest.

Related: MenuMasters: Trend-setting dishes from across the country

She brought her business partner Beth Gruitch, chief operating officer Matthew Brooks and culinary director Tim Kuklinski onto the stage with her to accept the award.

“I get accolades that really this whole family should get,” she said. “It’s been a crazy couple of years, and I’ve heard a lot of great stories about people making it, and I know we had that foxhole mentality where we got stronger over that time.”

The MenuMasters celebration had been delayed by the pandemic, so two years’ worth of winners were honored at this event.

“Thank you … for not making this a Zoom call or a Teams meeting call, which sucks,” said John Li, vice president for culinary research & development at Wendy’s which won the 2021 MenuMasters award for successfully rolling out breakfast right before the pandemic changed everyone’s morning habits.

“It makes me feel good that we’re doing our part to try to make people feel a little bit better. Let’s not undervalue what role we play in regard to that,” Li told the audience of chefs and restaurateurs. “And our biggest thanks to our customers who just kept coming, and I know you all feel the same way.”

Alarcon set the record straight about one aspect of the chicken sandwich rollout.

She said they thought they’d sell 90-100 sandwiches per day and prepared enough product for what they thought would last two months. Instead they ran out in two weeks.

“What we do is a team sport. It takes a lot of people to pull together a product like the chicken sandwich,” she said, and thanked her team for managing to resupply the restaurants and relaunch it.

MenuMasters is a 23-year-old awards program, and Ventura Foods senior vice president Jim Goggin has kicked off every one of the celebrations.

“I can tell you that means a lot to me, personally,” he told the crowd. “But this is not about our company. This is all about the winners and the people in the industry that represent the great, great things that happen with food, flavor and fun.”

“It seems fitting that we were awarded this on National Taco Day,” which is Oct. 4, Velvet Taco CEO Clay Dover said.

“When we work together we can overcome anything, any obstacle.”

Best Menu Revamp for 2020 went to Buffalo Wild Wings, which relaunched their entire menu in 2019.

“If there’s anything I’ve learned in the past two-and-a-half years or so is I have gratitude for a lot of things,” Jamie Carawan, vice president of brand menu and culinary for Buffalo Wild Wings, said. “I think I have a renewed gratitude for this industry and the people that we get to see every day.”

He also thanked all of the bartenders, servers and chefs at Mile High Station. “We have gratitude for these folks now. We realize how important they are.”

The 2020 Healthful Innovation award went to Chipotle Mexican Grill for the Lifestyle Bowls, which are curated items developed from the chain’s fully customizable menu to fit the needs of people following Keto, Paleo and Whole-30 diets, and available for order digitally.

“This is sweet for us because this was our first digital menu innovation, [and it was] pre-COVID,” vice president of marketing Stephanie Perdue told the crowd. She said the launch opened new approaches for the chain to introduce more items available digitally only, and to promote more items focused on health and wellness.

The Best Line Extension award for 2020 went to Burger King for the launch of the Impossible Whopper.

Mike Banton, the chain’s vice president of innovation and sustainability, said “touching the Whopper for us is a very big deal,” since it has been on Burger King’s menu since 1964. “But being bold is really part of the brand, and when the opportunity came around to do something plant-based we jumped at it right away.”

He said BK is now the global leader in sales of plant-based burgers.

The Trendsetter for 2020 was Dog Haus for its innovation in developing creative hot dogs, burgers, sausages, chicken sandwiches and more, and for collaborating on items with celebrity chefs for charity.

Partner André Venner and Denver franchisee Jason Bell accepted the award, and Venner said the 50-unit chain had fed more than $1 million kids by donating $1 of sales of each of those collab items to hunger relief organization No Kid Hungry.

“But we try to make a smile for every customer who comes in,” he said.

The 2021 best LTO award went to Smokey Bones Bar & Fire Grill for rolling out a comprehensive set of meal kits a month into the pandemic.

Best Line Extension for 2021 went to Lazy Dog Restaurant & Bar for the frozen TV dinners that it launched during the pandemic, which are still available for $10, and new kids’ ones are now available for $6, drawing on customer nostalgia, convenience and value that their guests are looking for.

Fantocone told the crowd, “It feels good to celebrate again.”