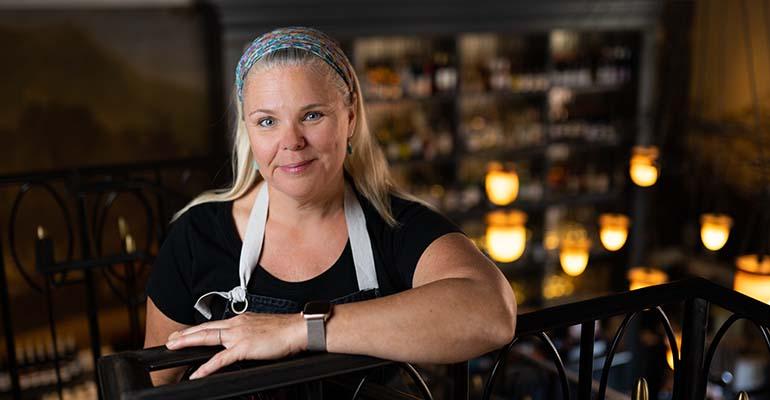 Jennifer Jasinski, a pioneer in the Denver dining scene who has helped make the Mile High City a culinary destination, is being inducted into the MenuMasters Hall of Fame in October.
News>People

Jennifer Jasinski to be inducted into MenuMasters Hall of Fame

The co-owner of Rioja, Euclid Hall and other Denver culinary landmarks to be honored in October

Jennifer Jasinski, a pioneer in the Denver dining scene who has helped make the Mile High City a culinary destination, is being inducted into the MenuMasters Hall of Fame in October.

She will be honored along with other MenuMasters award winners at a party by Nation’s Restaurant News sponsored by Ventura Foods on the evening of Oct. 4 at Mile High Station in Denver. She is also collaborating with NRN to develop the menu for the evening.

The hall of fame honors chefs who have spent their careers promoting culinary excellence in American foodservice.

"I’m honored and humbled to be inducted into the NRN MenuMasters Hall of Fame,” Jasinski said. “Joining the astounding list of chefs including my mentor Wolfgang Puck, José Andrés, Tom Colicchio, Daniel Boulud and others is super cool. I can’t wait to collaborate with the NRN team on a Colorado menu for the MenuMasters celebration – especially since it’s happening right here in my hometown of Denver."

Other past inductees into the hall of fame, which was established in 1998, include Jeremiah Tower, Susan Feniger, Mary Sue Milliken, Jacques Pépin and Paul Prudhomme.

Jasinski is the head of Crafted Concepts, which operates Rioja, Bistro Vendôme, Stoic & Genuine and Ultreia restaurants in Denver as well as Ultreia Paella Catering.

“I am so glad that we’re finally inducting Jen into the MenuMasters Hall of Fame,” NRN senior food & beverage editor Bret Thorn said. “She has been a terrific champion of great food and fun restaurants, and a brilliant mentor for other chefs. She’s also a fount of knowledge when it comes to sustainability issues and takes all of the responsibilities that modern chefs have seriously.”

Originally from Santa Barbara, Calif., Jasinski studied cooking at Santa Barbara City College and then The Culinary Institute of America in Hyde Park, N.Y. Her first cooking gig was at The Rainbow Room in New York City, but she soon returned to southern California and before long came under the wing of Puck, working closely with him since the only restaurants he had at the time were Spago in Beverly Hills and Chinois on Main. She stayed with him for 11 years as he expanded before spreading her own wings and landing in Denver at a Kimpton Restaurants property, Hotel Monaco, where she was executive chef of an Italian restaurant, Panzano.

Receiving critical acclaim there, she opened Rioja with business partner Beth Gruitch in 2004.

They went on to open their other restaurants, most recently Ultreia, which debuted in late 2017.

The venues are consistently listed among top restaurants in local press and Jasinski herself has won “chef of the year” and similar awards from Denver Magazine, The Denver Post, eater.com and 5280 Magazine as well as Restaurant Hospitality. Rioja was inducted into NRN’s Fine Dining Hall of Fame in 2011.

In 2013 Jasinski became the first Denver chef to win the James Beard Foundation Award for Best Chef in the Southwest.

Other accolades include the 2007 Jean Yancey award in the National Association of Women Business Owners Outstanding Women in Business awards presented by the Denver Business Journal, 2004 Colorado Chef of the Year and 2005 Western Regional Chef of the Year by the American Culinary Federation and the 2014 Princess of Pork at the Denver stop of the Cochon 555 festival.

Click here for more information about the MenuMasters celebration.

Errors in the name of Jennifer Jasinski's company and its current roster of restaurants have been corrected.
TAGS: Chef Insights
0 comments
Hide comments
Related
Sponsored