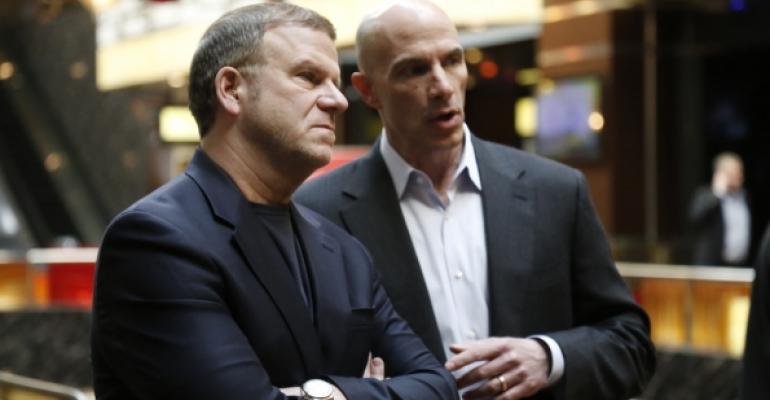 “People are going to see it’s an educational show, but a fun show,” Fertitta said. “It’s a business show that people will enjoy.”

“Billion Dollar Buyer” takes 12 entrepreneurs through the process to become a supplier at Houston-based Landry’s, which includes more than 500 hospitality properties, including such restaurant brands as Bubba Gump Shrimp Co., Mastro’s, Morton’s and Saltgrass Steak House, as well as five Golden Nugget Casinos.

The company said its supply chain is worth $2 billion, and Fertitta is always scouting the nation for new products.

“Billion Dollar Buyer” is produced by Endemol Shine North America, which is behind such reality hits as “Big Brother” (CBS), “The Biggest Loser” (NBC), “MasterChef” (FOX) and “The Real Housewives of Atlanta” (Bravo).

Fertitta spoke with Nation’s Restaurant News about the show:

When did you start taping the show?

The middle of December. We just finished it up. It’s been a hard three months to shoot just six episodes. We were all over the place. It’s not a studio show.

Given your history in the hospitality industry, what were your biggest learnings in creating this show?

It’s seeing how companies try to scale up and do big business, especially if they don’t have all the tools they need. You’ve got to understand operations, finance and marketing. If you don’t understand those three, chances are you are not going to make it. It’s just like that for most restaurants out there: Some people are great operators or great chefs, but they know nothing about marketing or nothing about the financial side, and they get into trouble.

What were you expecting out this project?

You get into a rhythm. In the beginning, it’s more difficult, but you figure it out. It’s a good show.

Each show is the same. You meet two small companies. You look at their product on their turf. Then you see how the product will work on yours. You give them a challenge, and you come back a few weeks later to see how they’ve done. Then you decide if you are going to buy from them or not in my boardroom at the end.

Any trepidations about doing reality TV?

I really didn’t have any. I knew it wasn’t a day-in-the-life. It was harder than I thought it was going to be. It was a lot of hours. I bet there was 120 hours of camera time to get to 42 minutes, and that doesn’t include all the green-screen time.

What enticed you about the project?

It was CNBC. I’d been a guest on its business shows for 25 years. … People will be able to get something out it. For a small-business person or a kid in high school or college, they’ll know something they didn’t know before. It’s geared toward small businesses. You’ll be a lot smarter when the show is over.

What gave a hospitality company like Landry’s an edge?

There’s no company like Landry’s. We buy everything, from a million sheets a year to a million playing cards to 20 million pounds of shrimp a year. … That’s what makes the show work. We can look at so many different types of products.

What would your advice be to a supplier?

Donald Trump used a boardroom reality television as a springboard for a political career. Any plans like that in Tilman Fertitta’s future?

I have enough money. [Laugh.] I don’t need to run for president. This is just for fun. I like my time too much, so politics is not in my future.

Correction: March 22, 2016 An earlier version of this story misidentified Tilman Fertitta in the photo caption.