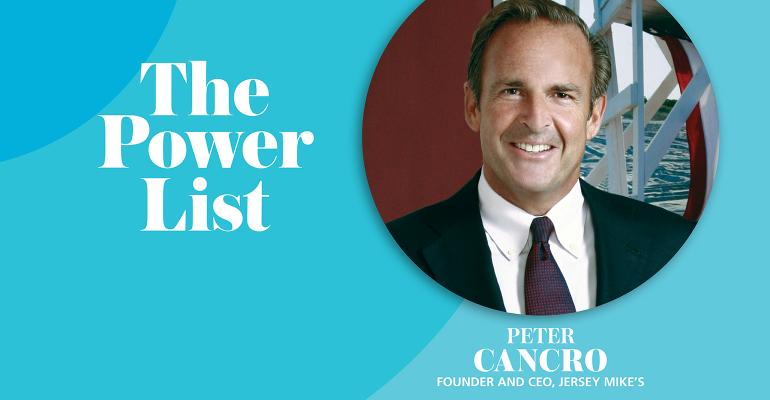 Peter Cancro could be the poster child for the concept of doing well by doing good.

Since buying the original location of what became Jersey Mike’s in Point Pleasant, N.J. in 1975, at the age of 17 — thanks to a loan from his football coach — Cancro has expanded the restaurant to more than 2,000 units open or in development.

He has always done it with the approach of giving back to the communities where the chain operates, as well as looking after franchisees and corporate employees.

Jersey Mike’s mission statement is “giving … making a difference in someone’s life,” and its motto is “raising up together.”

That includes fundraisers held throughout March, the chain’s Month of Giving, including a Day of Giving in which 100% of sales go to charity, but it also includes a mentality of teamwork with franchisees.

In 2019 Cancro took the unprecedented step of paying for the latest round of restaurant remodels, around $75,000 per restaurant.

That has continued into the pandemic. In fact, it’s easier to accomplish with most of the dining rooms closed, so remodeling is ahead of schedule.

Cancro also held calls with franchisees to walk them through applications for Paycheck Protection Program loans, which they all received. The parent company didn’t apply, though — Cancro told Nation’s Restaurant News that it didn’t seem right.

Although the pandemic forced the Day of Giving to be canceled in 2020, Jersey Mike’s continued to raise funds — switching its advertising from sports to news shows to drum up awareness — and raising the equivalent of 22 million meals one weekend, which it gave to the charity Feeding America.

Cancro also has launched a program to provide funding for young restaurant workers who want to own their own restaurants. Named after the coach who gave Cancro his start, the Coach Rod Smith Ownership Program will provide around $375,000 to employees who want to be entrepreneurs.

Jersey Mike’s itself is no charity, however: It’s one of the fastest growing chains in the country, having increased systemwide sales by nearly 17% in 2019, and leveraging its mostly takeout model to thrive during the pandemic.