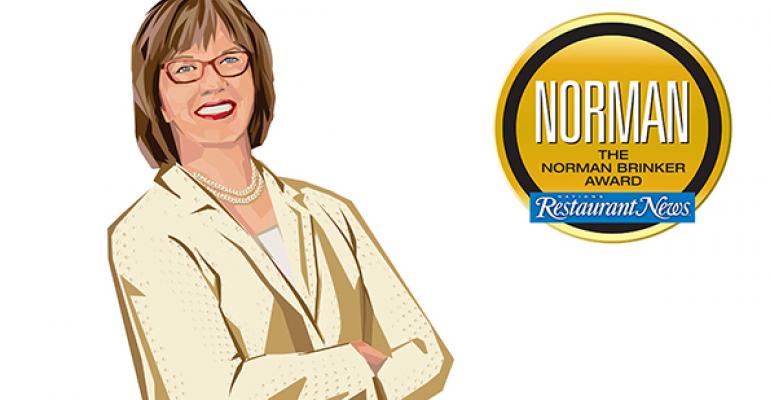 Celebrated for her leadership, Popeyes&rsquo; CEO has &lsquo;dared to serve&rsquo; for 35 years in the restaurant business. She will be honored along with the 2015 Golden Chain Award winners during MUFSO in Dallas, Sept. 20-22.

Dare To Serve. It is not just the name of Cheryl Bachelder’s new book, it is the three words that have guided her throughout her restaurant career, now more than ever as CEO at Popeyes Louisiana Kitchen Inc.

As the 2015 recipient of the Nation’s Restaurant News Norman Award for outstanding leadership, Bachelder now belongs to a group of six honorees who have each exemplified the characteristics of the late industry pioneer Norman Brinker — a man remembered equally for his development of people and ability to run excellent restaurant brands.

“Cheryl is a great leader,” says John Miller, president and CEO at Denny’s Corp., who worked under Brinker for many years. “She’s got some of those Norman qualities, like commanding [a] presence in the room. When she’s around, you just sort of sit up a little straighter.

“I think she finds a way to bring out the best in people,” he continues, “and I think one of the hallmarks of her leadership at Popeyes has been her concern for her customers, and her franchisees, and their profitability.”

When Bachelder took over as CEO at Popeyes in 2007, she faced a tough job. The chain was struggling to drive sales, profits were negative and franchisees were not happy. Her first step was to set four core goals: build a distinctive brand; run great restaurants; grow restaurant profits; and accelerate quality openings.

What’s more, Bachelder did it her way. She focused on her primary tenant of servant leadership — serving others over self. She wove her leadership philosophy into the fabric at Popeyes, perhaps most publicly by adding a fifth element to its four core principles: Develop servant leaders. That move was a perfect example of Bachelder’s coordinated focus on both people and business, just as Brinker had done.

“This award is, in my mind, one of the highest honors in our industry, and it is very humbling to receive,” Bachelder says. “Norman Brinker, who was an icon during my career in the restaurant industry, stands for amazing restaurant operations and [having] a touch with the people that is second to none. I’ve always admired him and the restaurant chains he and his teams led. I am very proud to be associated with such a generous, competent and impressive legacy.”

Patrick Doyle, president and CEO at Domino’s Pizza Inc. and the 2014 Norman Award recipient, has known Bachelder for nearly 20 years. In fact, Bachelder first hired Doyle into the Domino’s system.

“There are a number of things that really set [Cheryl] apart,” he says. “The first is, she is an incredibly active and intense listener. You’re with Cheryl, you know that Cheryl is hearing everything that you’re saying to her.

“I also think about the business … it is always the business, and importantly the franchisees, first. It is not about Cheryl.” Doyle says. “[That focus] is something she does with her people as well, and why she is such a deserving recipient of [the Norman Award.] With Cheryl, she builds that great team and then shows terrific loyalty to those people.”

A different kind of leader

Franchisees do indeed come first for Bachelder. In 2009, a Popeyes’ domestic franchisee survey showed that just 44 percent of respondents believed the franchisor and its franchisees were aligned around brand direction and growth. By 2013, that number nearly doubled to 85 percent. Just as important is the bottom line. In 2009, 44 percent of franchisees were pleased with restaurant cash flow, but by 2013, that rose to 85 percent.

Bachelder’s career spans more than 35 years at companies including Yum! Brands Inc., Domino’s Pizza, RJR Nabisco Inc. and The Procter & Gamble Company. She serves on the board of directors for Pier 1 Imports Inc., and the advisory board of Agile Pursuits Franchising Inc., a subsidiary of Procter & Gamble. She served on the board of directors for the National Restaurant Association from 2009 to 2012, and is an active supporter of the ProStart program of the National Restaurant Association Educational Foundation.

In 2012, Bachelder was recognized as Leader of the Year by the Women’s Foodservice Forum, a Silver Plate Award winner from the International Food Manufacturer’s Association, and a Nation’s Restaurant News Golden Chain Award recipient.

“Some of the things that she does, that Norman did so well, number one, she has gotten incredible results. ... It’s amazing how she has turned the brand around,” says Doug Brooks, former chairman and CEO at Brinker International Inc., and the 2010 Norman Award recipient. “Norman Brinker was a great leader, but he got results, and every time I hear Cheryl talk, she’s talking about leadership, inside her company [and] outside her company. I think she’s done it through promoting people from within and growing folks.”


In her book, Bachelder outlines the high set of standards she believes the best leaders can aspire to, with a focus on people and corporate culture first. The book is not just a story of Popeyes or even her own success, but is a manual of sorts for aspiring leaders looking to serve. She asks that people challenge their own assumptions about leadership.

“Our cultural norms for leadership are about the power of the position … we do not discuss how you create the environment for great work to occur,” she told NRN in May.

“My turning point, when I met Jim Collins in 2001, he said that in the highest performing companies the leader has a terrifying iron will for the enterprise, not themselves. And that is when my head flipped around and I said, ‘That is the answer.’”

In her book she says, “This is a different kind of leader with a rare combination of traits, courageous enough to take the people to a daring destination, yet humble enough to selflessly serve others on the journey. The dynamic tension between daring and serving creates the conditions for superior performance. This is a Dare-To-Serve Leader.”

Bachelder credits many for helping to develop her leadership philosophy: Aylwin Lewis, CEO at Potbelly Corp., who she says taught her how to run consistently excellent restaurants and how to reach into the ranks for talent; Sally Smith, CEO at Buffalo Wild Wings Inc., who as one of the few fellow women CEOs, was an example of how to grow a restaurant company with grace and humility; and Doyle at Domino’s, who Bachelder says holds a deep caring for the health of small businesses in America.

“When I think about a leadership legacy, I want to inspire people to be very purposeful in their work, to exhibit both competence and character,” Bachelder says. “I can’t touch as many lives as I’d like to so I want to make sure the few I can touch I do in a meaningful way.”