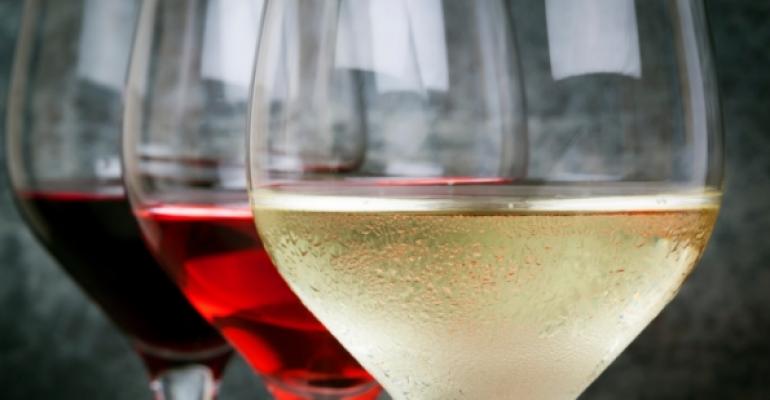 Every salesperson and winemaker who walks into a restaurant to sell wine wants to be featured in one place: the by-the-glass list. It’s the Broadway marquee of the restaurant, the bright lights of the beverage program. It’s the first page guests turn to, and the place beverage directors can showcase their personality. It’s where the highest volume of sales happen, where the staff will spend most of their time navigating and educating guests, and where the business can radically alter its bottom line.

Crafting a solid wines-by-the-glass list that is profitable and provocative, that changes seasonally yet aligns with the food and overall concept of a restaurant, is a study in skill and tenacity that takes years to master.

First and foremost, a wine director needs to remember that what’s in the glass is only part of the larger picture.

“In our restaurant, the food is the star, so wines by the glass play a supporting role,” said Tami Wong, sommelier and manager of chef Richard Blais’ Juniper & Ivy Restaurant in San Diego. “Every time I have asked a master sommelier what the hallmarks of a world-class wine list are, the first thing they say is that the wine must match the food. We feature local produce and seafood, so my list is heavy on white, rosé and light reds.”

For Vincent Comunale, wine and beverage manager of the Harvest Restaurant Group in New Jersey, which currently has 10 restaurants, his goal is not only to mesh wine offerings with the restaurants’ food, but with the overall concept of each operation.

“We have five different concepts within the group, with varying cuisines, price points, and ambiance,” he said. “We would be remiss to paint all lists with the same proverbial brush. We look to strike a balance between wines that will bring in a nice profit margin, as well as wines that will represent unique, high-end offerings that appeal to those looking for a glass of something special, without having to commit to a bottle.”

Most of Comunale’s glass lists are composed of 18 to 20 selections, with the fast-casual concept Urban Table offering around 12 selections. Pricing is meant to appeal to a wide variety of guests, with wines ranging from $8 to $25 a glass, and showcasing several tiers of classic varieties like Cabernet Sauvignon, Pinot Noir and Chardonnay in various styles. Comunale also likes to feature some more off-the-beaten-path regions, such as South Africa, Canada, New York’s Finger Lakes and New Jersey, with an emphasis on providing great wines at several different price points.

For Juliette Pope, beverage director at Gramercy Tavern in New York City, creating a great glass list does not only address the goals mentioned above, but “it’s also personal,” she said. The spots on her list are not granted lightly, nor without thought. “Each wine should be balanced on its own, be true to type, and should reflect the influences of nature and human in an interesting, expressive, authentic way,” she said.

Pope believes that by-the-glass selections should cover a range of styles, prices and origins, all while keeping overall value and diversity at the forefront. Additionally the list “should gradually shift with the seasons and should be rotated as fairly as possible among suppliers.

“The list should generally skew in the direction of the culinary offerings and, of course, should meet the financial targets necessary for the health of the business,” she added.

That’s no small feat. Pope, who has been the wine buyer at Gramercy Tavern since 2003, is always striving to interweave these goals to keep things interesting for her staff, herself, her guests and her salespeople.

Pope maximizes profitability by both buying and pricing smart, which often means buying more bottles than she needs in a given moment to get the price break on multiple cases. Then her pricing can be based on the original, or “front line,” price rather than the discounted price. “Make your fast movers the ones with the best margins, without ripping your guests off,” she said.

She also recommended keeping the price of higher-end or esoteric wines lower, because that will encourage guests to try new wines and possibly improve their experience. Since you won’t sell much of those wines anyway, they won’t have much impact on the bottom line.

Of course, every operation is different, but there are some generally followed principles when it comes to wine lists. For instance, on a wines-by-the-glass list, it’s common that the price the wine buyer paid for the bottle will be the price he or she charges for a glass of that wine. With a bottle yielding three to four pours (most offer a six-ounce pour), that will put their cost at around 25 percent. Wines sold only by the bottle on a list commonly see a mark-up of three times what the buyer paid for the bottle (a 33-percent cost), demonstrating why an emphasis on a well-constructed glass list can mean higher profit. And if space allows in your cellar, taking a five-case drop of product, for example, can yield a further discount, without your customers having to pay any more than is expected. Over time, strong relationships with suppliers will emerge, and if they’re doing their job correctly they’ll be able to learn the style of your operation’s focus and bring specific wines to meet those goals. That ends up saving everyone time and ensuring you’re tasting not only the latest offerings, but also the rarest wines available only to a few.

Pope, Comunale and Wong are all interested in tracking down wines that their guests often cannot find in retail shops, and find joy in discovering small producers from lesser-known regions while avoiding chasing scores and ratings. A glass list is where their favorites are often showcased so they can be shared with guests and staff alike, and where a quick glance reveals much about the wine director’s personality.

Pope is a great example of this, and her esoteric quirks shine through. Her list has “multiple rosés, even in winter,” she said with a chuckle, “selections that are heavily skewed toward the Old World, but also local juice from New York, always Lambrusco, Jura whites, skin-fermented whites, obscure grapes from better-known regions, better-known grapes from unexpected places, ciders and even sweet wines.”

Her guests have come to expect to be challenged and taken on new journeys, but Pope cannot do it alone. She needs her staff to be on board, as well.

Staff training might be the most essential piece of the puzzle. New wines being offered by the glass must be regularly tasted and reviewed; there might be as many as 20 to 30 members of your service team on the floor each night actively selling those wines. During tastings with her staff, Wong ensures that they’re not only tasting all the wines, but are able to describe them in their own words, as opposed to reciting a script. That allows them to feel ownership of their knowledge and makes them comfortable not only recommending wines, but creating successful matches with the food.

Additionally, “They need to know why a wine is special and how to convey that at the table,” Wong said. “We have a lot of esoteric wines, so it is imperative that we be gracious when handling questions and have the attitude of, ‘Check out this cool wine we just discovered,’ rather than perpetuating the stereotype of the pretentious wine snob.

“I am constantly on them about pouring the proper amount, as well. It’s easy to get carried away and over-pour, which of course cuts into profits.”

What approach do you take in building a wines-by-the-glass list? Join the conversation in the comments below.

Comunale, in addition to regular tastings, also holds a “wine college” twice a year where the staff reviews how to taste wine, basic wine terms and production techniques, as well as the principles of pairing. While a staff member may be able to soliloquize on the slope of a particular vineyard and how its soil types vary with elevation, being succinct and focusing on the basics of the wine’s flavor profiles and a few details about the producer or region will win more fans at the table. Guests’ attention spans are limited, so less is definitely more, Comunale said.

A well constructed wines-by-the-glass list can be a thing of beauty: If done well, it will serve as a showcase for the restaurant’s approach, a window into the talents of the wine director, a fun arena for the staff to explore with guests, and a steady profit-driver for the beverage program. Through constant analysis, and by consistently switching up the offerings not only seasonally, but also through creative inspiration, the glass list can become a calling card that excites the staff, the suppliers and the guests alike, all while holding a steady hand on the purse strings.