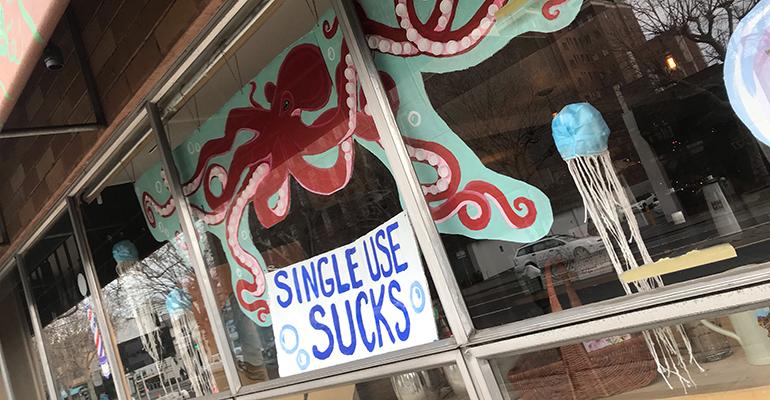 MudLab in Oakland, Calif., offers coffee and other beverages, along with pantry items, in reusable containers.
Operations

Will your restaurant’s sustainability efforts make the grade? Consumers are watching

A growing number of mobile apps that use crowdsourcing to monitor restaurants’ sustainability practices have emerged during the past year, seeking to steer operators toward more environmentally friendly behavior as they emerge from pandemic mode.

PlasticScore allows users to rate restaurants based on the types of containers and utensils provided, with a perfect score of 5.0 awarded only to restaurants that offer no single-use items at all. Remark, meanwhile, allows users to generate automated emails offering businesses feedback on their observations around sustainability practices, both positive and negative.

They join JYBE, an app that launched last September that uses customer reviews to help direct consumers to restaurants that use environmentally friendly packaging.

New York-based Just Salad has been taking a closer look at PlasticScore, which allows restaurants to fill out their own sustainability scorecards to post on the app.

"I think if these apps are helping us transition to a world where reusables are the norm in the fast-casual dining space, that’s commendable, and really important," Sandra Noonan, chief sustainability officer at Just Salad, told Nation’s Restaurant News.

Long a pioneer in the waste-reduction movement, Just Salad is known for its reusable bowl program and other environmentally friendly initiatives.

Both PlasticScore and Remark said their goal is to encourage more sustainable practices in the restaurant industry.

“We are hoping to get restaurants’ attention, so they are focused on sustainability, and give them the tools to help them improve, reduce their waste, and then market their sustainability to customers,” said Mladen Gajic, CEO of Denver-based PlasticScore.

Many of the app’s users are in the Denver and Boulder, Colo., area, although the company has also picked up pockets of users on college campuses and among sustainability-focused groups in areas around the country, he said.

“Our users are hoping to change the industry, and reduce plastic pollution and all of the negative things that result from that,” Gajic said. “They want to help them improve the environment, and their business — if customers see that restaurants are doing things to be sustainable, hopefully they will choose to eat there, and eat there more often.” 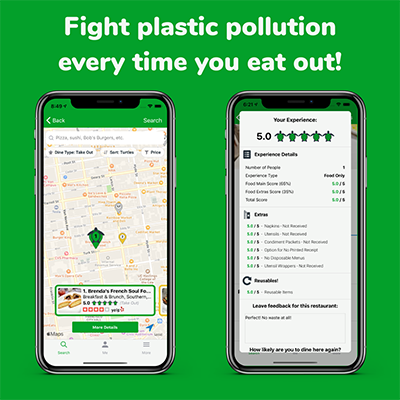 On its website, PlasticScore offers links to resources for restaurants seeking to operate more sustainably.

Meanwhile Remark, while it has similar goals, has a different business model. The app allows customers to note any unsustainable practices they observe at restaurants, and then notify the restaurants with an anonymous email generated by the app. Users can indicate — by clicking on a smile or frown icon — whether or not restaurants are following a broad range of sustainable practices, including the automatic inclusion of disposable cutlery with takeout orders, the availability of vegan menu options and the use of downloadable menus instead of disposable menus printed on paper.

Users can also customize an email to make comments about sustainable practices they observe, either positive or negative.

“One of the distinguishing features of Remark is that we are not publicly shaming restaurants or other businesses for their sustainability practices,” said Jess Lybeck, co-founder and CEO of Remark, which is also based in Denver. “We are just letting restaurants know that their customers care about these issues, and are hoping for a change.”

Lybeck said she had been reaching out to restaurants herself before launching Remark, and had been surprised by the positive response she had received from operators that genuinely wanted to improve their sustainability efforts.

Even during the pandemic, when restaurants were forced to quickly pivot toward off-premises dining and the packaging and waste that goes with it, she said restaurants have been conscious of sustainability issues. Restaurants have typically responded in a positive way to criticism they have received from customers through the app, she said, with the caveat that they hope to operate more sustainably going forward.

“Most are begging for customers’ patience during COVID,” said Lybeck.

About 20-25% of the emails that Remark receives generate a response from businesses, she said, noting the rate that those emailed are opened is “much higher.”

Although Remark does not reveal the number of users it has, Lybeck said its user base has been doubling almost every month.

Remark is also able to track changes that restaurants implement over time. For example, if a customer notes that a restaurant is using Styrofoam containers, and another customer later notes that the restaurant has switched to compostable packaging, that is recorded in the app, and all of the customers who previously had sent feedback are notified.

A handful of restaurants have changed their behavior as a direct result of the feedback through Remark, Lybeck said.

Remark is seeking to offer free advice to restaurants that want to boost their sustainability, she said.

“One of the things we are trying to get out there is that sustainability can save businesses money,” she said.

Vanessa Pope, founder and executive director of MudLab, which operates a zero-waste café and retail store in Oakland, Calif., said she is aware of both apps and sees them as helping drive sustainability overall in the industry.

“It’s another way to help restaurants [be more sustainable],” she said.

Mud Lab encourages customers to bring their own reusable containers to its café, which offers drinks and pantry items, she said.

Noonan of Just Salad said she’s encouraged that the apps give consumers a platform to provide feedback.

"Even if they aren't perfect right now, I am happy to see these rating systems, and even happier that consumers are taking the time to rate," she said.

She also pointed out that consumers can also play a role by opting out of receiving plastic utensils when they order takeout if they don’t need them.

“To me that has a potential bigger impact than ratings, because you are allowing the customer to take action to reduce waste," Noonan said.

She noted that GrubHub recently announced that it would make opting out of plastic utensils and napkins the default option on all orders over the coming months, following in the footsteps of Uber Eats and Postmates. All three delivery companies have joined the #CutOutCutlery campaign, an effort organized by HabitsofWaste.org.

Yelp had previously launched a sustainability comment feature in its restaurant review platform, but a spokeswoman for Yelp declined to comment on the status of that service.

Consumers remain focused on sustainability, even if restaurants’ attention has been diverted to other matters lately.

Mentions of the terms “compost" and "compostable" in Yelp reviews were up 33% in U.S. restaurant reviews through the first six weeks or so of 2021, compared with a year ago, said Jackie Berte, communications manager at Yelp.

And legislation seeking to curb the volume of plastic waste continues to move forward at the local, state and national levels.

Last week U.S. Sen. Jeff Merkley (D-Ore.) and U.S. Rep. Alan Lowenthal (D-Calif.) re-introduced the Break Free From Plastic Pollution Act of 2021, which would place much of the recycling burden on plastics manufacturers.

In California, the Plastic Pollution Coalition and other organizations have called upon Gov. Gavin Newsom to issue an emergency executive order making disposable utensils available to customers only upon request.