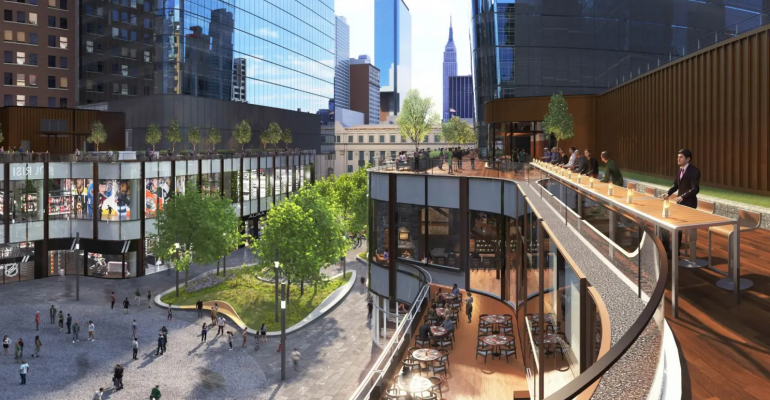 Brookfield Properties and ReThink Food have extended their partnership — this time for all of Manhattan West, New York City’s newest neighborhood.
Operations

Brookfield Properties and ReThink Food have extended their partnership — this time for all of Manhattan West, New York City’s newest neighborhood.

The two announced last week that in partnership with ReThink, every food or restaurant space on the Manhattan West campus would commit to donating excess food, preparing onsite meals utilizing excess ingredients, or fundraising for Rethink.

“The pandemic hit hard in many ways, and the restaurant industry in particular, but also food insecurity became even more prevalent around the city,” Callie Haines, executive vice president and head of New York for the office business of Brookfield Properties, told Restaurant Hospitality.

“I think it starts with just having great partnerships with our tenants and then being able to bring these types of things to them. And they were more than happy to jump on board and really excited to be part of the program,” Haines said.

For this partnership, donated food will be collected daily from participating restaurants and food spaces, then brought to the ReThink commissary kitchen in the Financial District for distribution with community based organizations that ReThink is already working with.

“The Rethink Certified Campus at Manhattan West is a major milestone in our effort to bridge the gap between the 108 billion pounds of food that go uneaten in the U.S. every year and the 38 million Americans who lack reliable access to food. Leveraging Rethink Food’s model, this unique campus embodies how we can collectively transform excess food into nutritious meals — and connect these meals with areas of food insecurity,” said Matt Jozwiak, Rethink Food Founder and CEO, in a statement.

“We’re incredibly proud to partner with Brookfield Properties and its network of like-minded restaurants and market partners at Manhattan West to redefine how together we can not only impact the lives of the community we serve, but also the environment around us,” he added.

The program began slowly in March and has been ramping up since then. In the month since its inception at the Manhattan West campus, 6,000 lbs. of food have been donated along with 3,000 meals. That means that 15,000 lbs. of carbon emissions and 140,000 gallons of fresh water have been diverted as well.

Brookfield Properties and ReThink Foods began their partnership when Danny Meyer and Union Square Hospitality Group suggested the developer join with the sustainability company back in July 2020. At the time, Brookfield was working with Meyer to turn three of his restaurants into community kitchens.

In 2020, Brookfield donated $1 million to Rethink Food in the height of the pandemic to activate restaurants, rehire staff, and donate meals to families in the Bronx