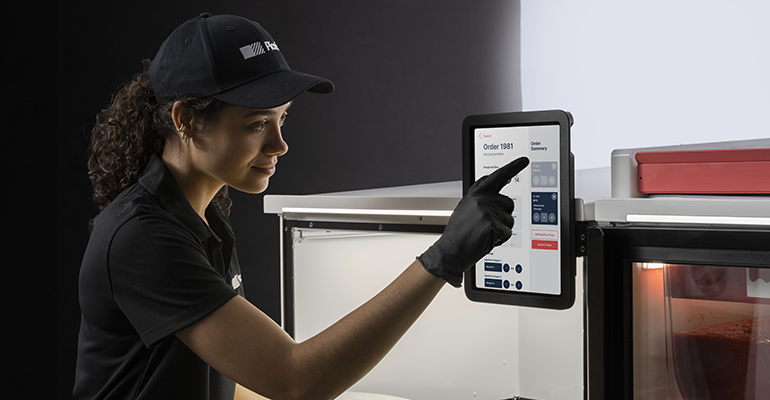 Native Foods, which has traditionally featured a long galley kitchen configuration, has also tightened up the layout, Stutz said, which allows workers to pivot in place and work multiple pieces of equipment with minimal steps.
Operations

With restaurants continuing to evolve toward more convenience and high-tech operations, innovative foodservice equipment has become a key consideration.

Foodservice operators’ equipment needs are evolving to meet the demands of a new environment in which off-premises dining plays a larger role, operating costs have soared, and new opportunities and challenges are arising almost daily.

At the top of operators’ wish lists for 2023 is equipment that helps minimize labor costs and optimizes efficiencies. This includes not only experiments with robotic equipment that performs physical tasks such as cooking fries and burgers, but also equipment that is configured to improve throughput and allow operators to serve customers with fewer staff.

Another major trend is the ongoing demand for off-premises dining, which in some cases has required additional equipment, such as second drink dispensers to better handle multiple food distribution points, and temperature-controlled lockers to better manage pick-up orders.

Other equipment investments include those that seek to drive operational efficiencies beyond labor and/or improve sustainability, such as heating and cooling units that require less maintenance and optimize energy use.

Here’s how these trends may unfold in 2023 and beyond. 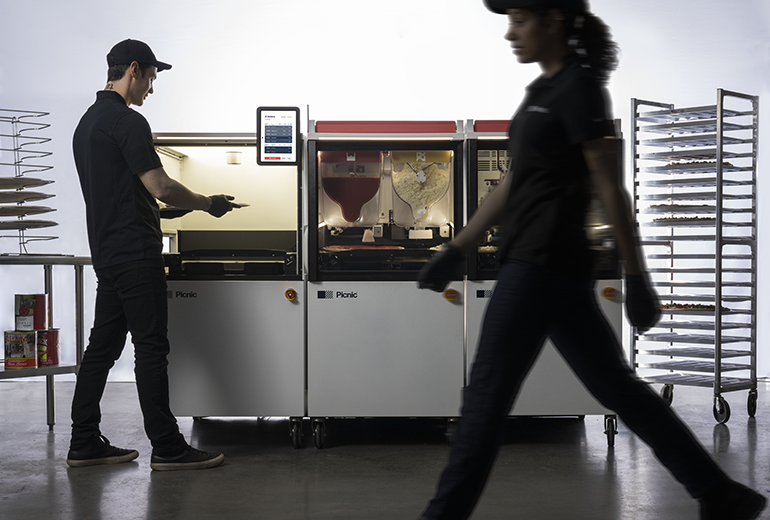 The plant-based chain is adding both induction cooktops and combination ovens — which can use a combination of steam and convection cooking — to its kitchens as it builds new locations, she said.

“The energy efficiency of the induction equipment and the versatility and productivity from of a combi-oven are a win for our scratch kitchens,” said Stutz, adding that “every product cooked in a combi-oven is fantastic.”

Native Foods, which has traditionally featured a long galley kitchen configuration, has also tightened up the layout, Stutz said, which allows workers to pivot in place and work multiple pieces of equipment with minimal steps.

Mark Spurgin, chief supply chain officer at Restaurant Growth Services, parent of O’Charley’s and The Ninety Nine Restaurant and Pub chains, said his company is in the midst of kitchen equipment rollouts at both brands.

O’Charley’s has been rolling out CTX conveyor ovens from Middleby Marshall, which Spurgin said have helped boost consistency and minimize labor costs in the back of the house, particularly for items such as salmon. The ovens had been rolled out to about 70% of the company’s 140 O’Charley’s locations by December.

At Ninety Nine Restaurants, the company is installing one or two TurboChef convection ovens in each location, marking the first time the chain has had ovens in its kitchens. It expects to have the ovens rolled out to all 100-plus locations by the end of 2023, Spurgin said, up from about half the locations as of December 2022.

“Once we get that oven installed, we're seeing results the next day because of the high sales and the high traffic that we have at the Ninety Nine Restaurants,” he said. “They have certainly helped things move quicker.”

Another piece of equipment that has received more attention from operators recently is the dishwasher, said Steven Baker, an architect at HFA Architects and Engineers, who works on QSR restaurant design. Although long common in some restaurant kitchens, many operators have long relied on sinks for washing their kitchenware.

“For a long time, dishwashers were expensive pieces of equipment,” Baker said. “Now we're seeing a lot of people adding dishwashers to reduce their labor needs.” 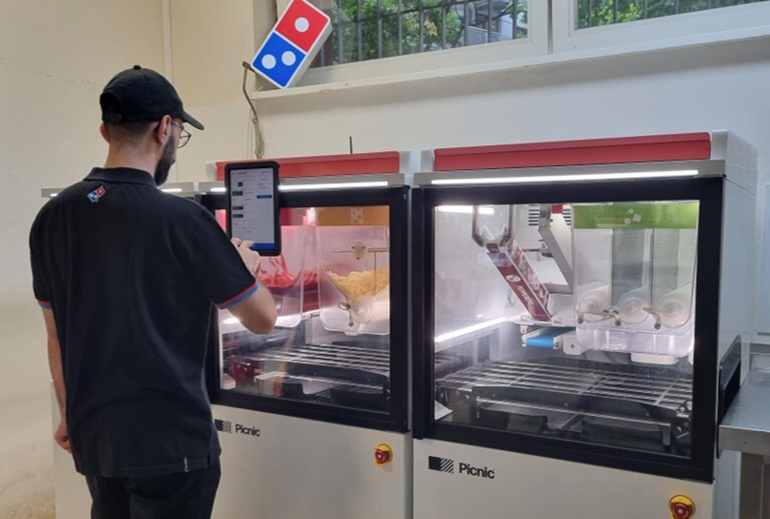 A Domino’s franchisee in Germany recently partnered with robotics company Picnic Works to test a robotic pizza assembly system, which are also implemented by regional operators.

Much like the ongoing transition from gas-powered cars to electric, restaurant kitchens are also flipping the switch.

“Gas not only requires additional costs for hoods and ventilation, but due to combustion there is a lot of wasted energy,” said Stutz of Native Foods. “Electric provides direct heat transfer, so if your location has the electric load to handle it, it could be a much better option.”

“As we've seen in automobiles, it is more difficult to automate a gas-based combustion engine than it is to automate an electric engine,” she said. “I would say the same thing will happen in kitchens, where electrification is really a precursor to automation. It is much easier to change the temperature and monitor and control an electric system than it is a gas-based system.”

She cited the increasing popularity of sous vide cooking and smart ovens as examples of steps toward automation in the kitchen. Smart ovens, such as those used in Starbucks, can be used to produce items that are comparable to those cooked in gas ovens, but with more consistency and less labor, she said.

Sandland said she envisions that restaurants will eventually combine this type of smart technology with mechanical robotics to achieve a more completely automated operation.

“As you move toward a more electric kitchen, you can have robotics that are much more streamlined and much simpler to use,” she said.

Perhaps the best-known robotics are those such as Flippy, the burger-flipping and French fry-cooking machines from Miso Robotics that have been tested at chains including CaliBurger and White Castle. But the pizza segment has also been active in this space.

“The test phase in Berlin was very instructive,” a spokesperson for Domino’s Pizza Enterprises, the German franchisee, told NRN. “We were able to gather a lot of information and are currently in the evaluation phase. Our long-term goal is a German rollout as well as potentially in other markets.”

Picnic’s systems have also been implemented by some regional pizza operators and in several noncommercial foodservice settings, including at Texas A&M University and The Ohio State University, and through partnerships with Compass, Chartwells and Sodexo.

Stutz of Native Foods said that while she sees robotics eventually playing a larger role in restaurant kitchens, the costs are currently prohibitive for many smaller chains.

“The larger companies who are investing in this technology will ultimately make it an option and more affordable for all,” she said. 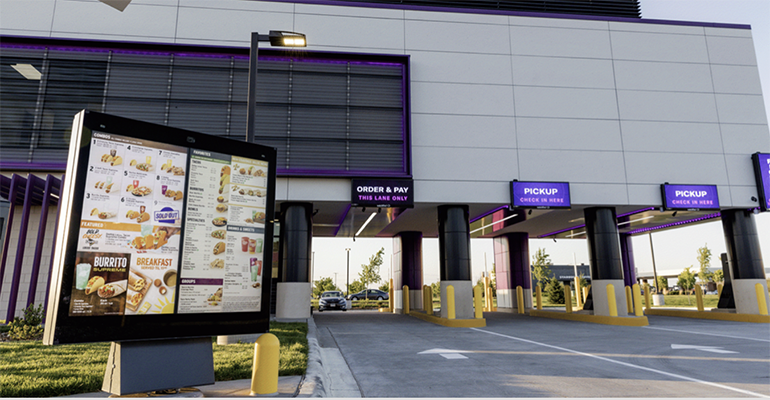 Increased consumer demand for off-premises dining is in some cases creating the need for duplicate stations, such as beverage machines and dispensers, in order output areas, said Baker of HFA Architects and Engineers.

“We're seeing restaurants reconfigure to serve the mobile ordering that they didn’t have before,” he said. “Sometimes we’re seeing larger back-of-house spaces or dedicated areas to prepare meals for those additional services.”

He also said restaurants are incorporating more modular designs into their kitchens so that components and cooking stations can be added or removed with minimal cost and disruption as operators experiment with new menus.

Other operators have also reported installing more modular kitchen equipment configurations to support the addition of virtual brands, such as added fryers for virtual fried chicken sandwich or wing concepts, for example.

Temperature-controlled lockers for order pickup are another addition that some restaurants have added to meet demand for off-premises dining. Little Caesars, for example, has been keeping pizzas warm for pick-up orders since 2018 with its Pizza Portal system, while Brooklyn Dumplings has made pick-up lockers a core feature of its concept.

“Consumers like to do what I call ‘self-delivery,’” said Sandland of Empower Delivery. “They love to do drive-thru and pick-up, and anything restaurants can do to make that a better experience, including temperature control, and making sure people get the right order, is a good thing.”

One of the off-premises technologies that has caught her eye recently is vertical conveyance systems for drive-thru orders, which have been deployed at a handful of Chick-fil-A and Taco Bell locations that have multiple drive-thru windows.

These types of systems facilitate the service of multiple pick-up points from the same kitchen, she said, which can increase efficiency and throughput “because you're not limited by how many cars you can put through the drive-thru.”

In addition to the new ovens at O’Charley’s and Ninety Nine Restaurants, RGS is also revamping its approach to heating, ventilation and air conditioning (HVAC) equipment. The company recently announced the expansion of its outsourced energy management partnership with Budderfly, which is replacing and maintaining HVAC equipment, among other energy-saving services, at most O’Charley’s and Ninety Nine locations.

As a result, RGS is targeting a 30% reduction in energy usage per restaurant, Spurgin said. The company currently spends about $14 million per year on electricity, he added.

The investments that Budderfly is making in restaurants to replace and maintain HVAC equipment are not only saving RGS money on equipment, but also on operating costs in the form of reduced repair and maintenance on the new equipment, Spurgin explained.

In addition, Spurgin said RGS just signed an agreement with Restaurant Technologies Inc. to automate the oil management for its fryers at all of the company’s restaurant locations. The systems monitor the oil and issue alerts so that oil can be replaced automatically to optimize use and minimize labor.

He said the company expects about a 10% reduction in oil usage, along with a huge reduction in the use of plastic oil containers.

“I’m happy not to be putting those in the landfill anymore,” he said.