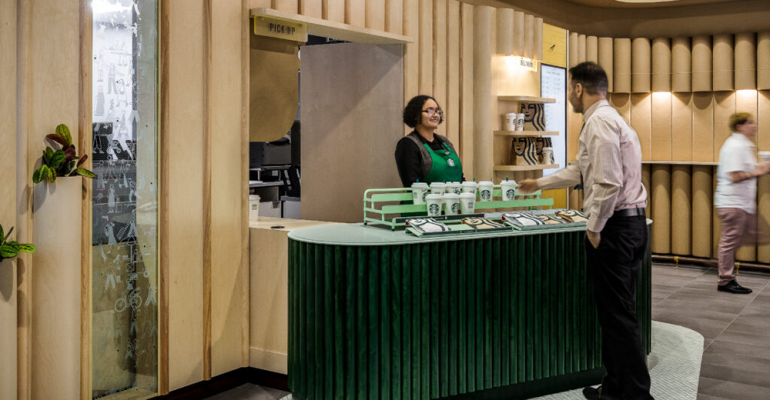 In the month of November, Starbucks has opened both its largest location in the world — the Chicago Reserve Roastery — and one of its smallest, minimalist stores: a pickup-only location in New York City.

Related: Starbucks: 5 things we learned this past week

By contrast, the express, pickup-only Starbucks that just opened last week in New York City is minimally designed for customers and delivery drivers to quickly pick up their order and leave.

At first glance, the strategies behind these two new stores seem to be at odds with each other; one focuses on customer experience while the other favors convenience. Are Starbucks customers the types to want to savor their siren-branded moment, or do they just want to get through their morning coffee routine as quickly as possible?

Related: Why Starbucks chose Chicago for its largest Roastery in the world

The answer is both.

During the company’s most recent earnings call, Starbucks CEO Kevin Johnson said that customers are responding to improvements made to the in-store experience, which includes new technologies and staffing enhancements. These are just two different types of store experiences to add to Starbucks’ repertoire.

“I think they are being supremely conscious in terms of not wanting to present too confusing of a message to customers and investors,” John Gordon, a restaurant consultant at Pacific Management Consulting Group said.

“I would say they definitely timed it this way on purpose. … To have two cross-current concepts being developed at the same time would help alleviate some of the pressure and media/investor attention on the roasteries.”

Gordon predicts that this will be the last large-format Reserve Roastery that Starbucks opens for a while, as Starbucks makes the final shift from the Howard Schultz era of Starbucks to the Kevin Johnson era. Although Johnson started his tenure as CEO in 2017, and Schultz ended his the same year, the reserve roasteries were Schultz’s pet project. Originally, Schultz said that he wanted to have 1,000 Starbucks Reserve bars and 20 to 30 of these mega Reserve Roastery stores around the world.

But Johnson has since tried to scale back on the original ambitious vision for the Roasteries:

“One thousand was an aspiration,” he told the Wall Street Journal in a Jan. 2019 interview.

Although not much has been said about the future goals of the large-format Reserve Roastery stores beyond Chicago since then, Johnson has put his money where his mouth (and priorities) are: Many of the company’s resources have since been devoted to expanding the convenience of mobile order platforms and delivery. Around the same time that Johnson announced that Starbucks delivery would go nationwide in July, the first Starbucks Now express store opened in Beijing that focused on mobile order pay and delivery customers.

Now four months later, a similar concept — the Starbucks pickup store — has made its way to the U.S. The pickup store in New York similarly focuses on mobile customers: customers can use their mobile order and pay to pick up at the new Penn Plaza location. Once they arrive at the minimalist store with no seating and very little décor or branding, they can track the status of their order on a digital board and pick it up when it’s ready.

But don’t expect these pickup-only stores to start popping up all over the place. Starbucks said that these specialized stores are ideal for “high-traffic, metropolitan areas,” while the Reserve Roasteries seem to be similarly ideal for more tourist-driven, but still high-traffic areas.

“I don’t think there’s much doubt that they will open up more [of these pickup-only locations] because it fits their portfolio perfectly as long as they pin it to the right type of location,” Gordon said.

“But remember, the idea of the traditional third place Starbucks is deeply-embedded and if they try to get too cutesy with [these new concepts], they could lose out on market share.”