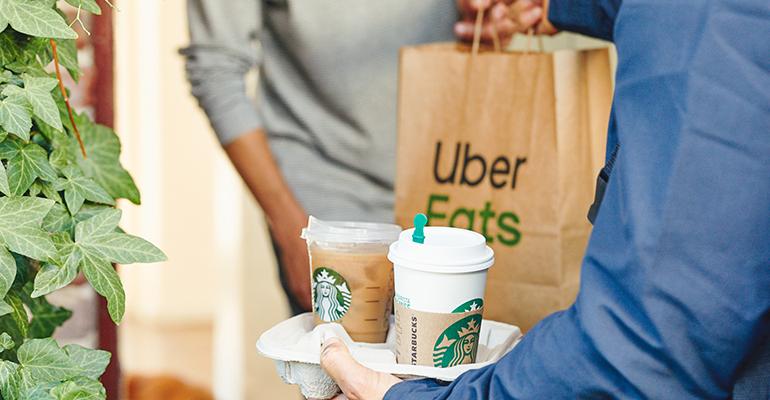 Up until now, the Starbucks Delivers program had only been in a test phase, available in 11 select markets including Miami, Seattle, Boston, Chicago, New York, Washington D.C., San Francisco, Los Angeles, Orange County, Houston and Dallas.

“We are driven to create new and unique digital experiences that are meaningful, valuable and convenient for our customers,” said Roz Brewer, group president and chief operating officer for Starbucks, in a statement. “Partnering with Uber Eats helps us take another step toward bringing Starbucks to customers wherever they are.”

About 95% of the Starbucks menu will be available through the mobile delivery app, excluding items with foam like macchiatos and cappuccinos, which the company said don’t hold up well during the delivery process.

Along with being the preferred delivery partner, Uber Eats will also collaborate with Starbucks on delivery technology and innovation, the company said.

“Our customers are huge Starbucks fans and love being able to get their favorite items delivered with Uber Eats speed,” said Jason Droege, vice president of “UberEverything.” “We’re excited to expand our partnership across the United States to make ordering their favorite coffee and breakfast sandwich as easy as requesting a ride.”

Starbucks announced its first delivery expansion in December 2018, after a successful pilot test in Miami, and confirmed that the delivery platform test phase that would roll out to about a quarter of U.S. stores nationwide in 11 major markets. The first wave of cities were added to the Starbucks Delivers roster in January, while the second wave of test cities followed in the spring.

The Seattle-based coffee chain's U.S. delivery program has gained from tests in Miami as well as China, where the company partnered with Alibaba Group Holding. Starbucks had accelerated delivery plans in China to keep up with competitors like Luckin.

Starbucks has also teamed up with Alibaba and Hema supermarkets to test delivery orders using “ghost” or cloud kitchens, where the delivery-only kitchens are not attached to a restaurant, in order to improve order efficiency and quality.