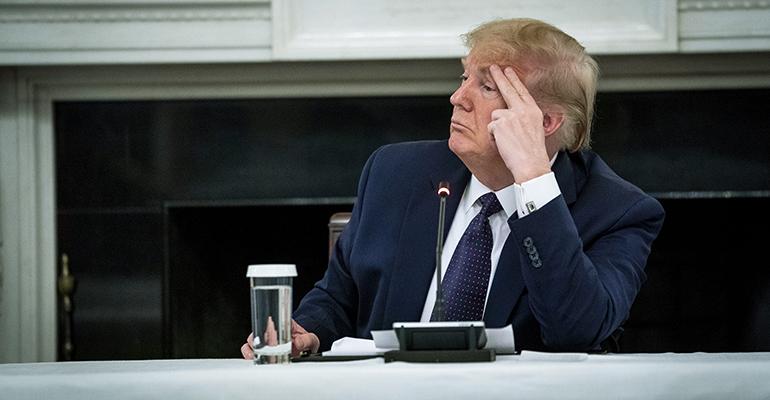 Eight restaurant executives met Monday with President Donald Trump at the White House, pressing for an extension of the Paycheck Protection Program terms from eight weeks to 24 and raising other industry issues such as liability protections and additional financial assistance with the administration.

“We think that eight-week deadline, when it — when it was implemented, was probably — you know, eight weeks probably seemed like an eternity,” José Cil, CEO of Toronto-based Restaurant Brands International, told the president, Treasury Secretary Steve Mnuchin and other administration officials at the meeting.

“But today, we’re — we’re in the 10th week of the pandemic, and I think it’s going to take some time for our restaurants and our owners to get back to the capacity levels and the traffic levels that we were seeing pre-COVID,” Cil said, suggesting along with other restaurant leaders that operators needed more time in the loan forgiveness window.

“A little more time, we think — probably taking it to 24 weeks — would be appropriate to allow for restaurant owners that are participating the program to be able to manage through and rehire the employees, which is what the purpose of PPP was intended for,” said Cil, whose company owns the Burger King, Popeyes Louisiana Kitchen and Tim Horton’s brands.

The Paycheck Protection Program was included in the $2 trillion Coronavirus Aid, Relief, and Economic Security, or CARES, Act, which Trump signed on March 27. The PPP offered nearly $350 billion to businesses with eight weeks of cash-flow assistance. The Small Business Administration would forgive loans if employees were kept on the payroll for eight weeks with 75% of the loan. The remainder could be used for rent, mortgage interest or utilities.

Mnuchin said the administration is working on a “technical fix” for an extension of the deadline. “But I’ve spoken to the SBA committee and there is bipartisan support, so we’re working on that,” he said.

Trump told the gathering that the administration was also looking at restoring business tax deductions for restaurants and entertainment clubs, and it would be working with Congress on that change. “That’s going to create a tremendous amount of business,” he said.

Trump also said the administration is looking to create an “Explore America” tax credit that citizens could use for domestic travel, “including visits to restaurants. That’s a big deal.”

Chaudhary of Panera, along with the other restaurant participants, emphasized what they called needed amendments to the PPP.

“It’s made a huge difference to our franchise partners and our associates,” Chaudhary said. “I think, with a few of the amendments that we talked about — I’d fully agree with the eight weeks and 24 weeks; I think that is badly needed.  I think that will be hugely welcomed.”

Love said he was asking for his colleagues in areas with higher-priced real estate and leases that the administration press for changing the 75/25 spending designation on payroll versus other costs in the PPP.

“They need the ability to spend the money on rent if necessary, so long as they’re hiring their employees back,” Love said.

Fertitta of Landry’s, who also owns the highly impacted Golden Nugget casinos and the Houston Rockets basketball franchise, said his companies do $4 billion in revenue and employ 40,000 workers but were not able to take advantage of the PPP. “It’s been devastating,” he said.

He urged the administration to consider some assistance for large privately held hospitality companies.

“If you would just split it up — and I’m not saying add any more money, but add a category for the larger private restaurateur that could go out and take this money and put it in a different bucket so it wouldn’t be me taking this money away from the little beauty salon,” Fertitta said.

Feeney, who owns Lilia and Misi in the Williamsburg area of New York and founded, along with Keller, Guidara and others, the Independent Restaurant Coalition, said the impact of the coronavirus pandemic was enormous.

“The prolonged economic shutdown created challenges for our industry that has to be met with policy to inject liquidity, investment, consumption and hiring,” Feeney said.

“The intention of PPP to support small businesses and restaurants was pragmatic and encouraging,” Feeney said. “We have all agreed that it wasn’t perfect, but we’re working on it, to fix it so that it could help us.  But we need those fixes now.  Like me, I have it and I can’t use it.  I’m in the clock zone of eight weeks.  PPP is a bridge.”

Keller thanked the president for his support of the Business Interruption Group, which was started with chefs to address insurance concerns.

“We’ve started to make some inroads with the insurance companies, certainly with some of the congressmen and some of the senators,” Keller said. “So we continue to work on that for all businesses, not just for restaurant businesses.”