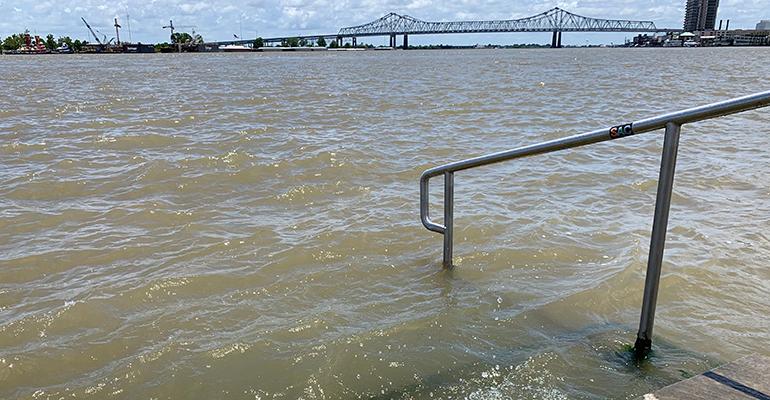 Some operators close preemptively amid fears of flooding

New Orleans was urged to hunker down on Friday as Tropical Storm Barry threatened to hit the Louisiana coast over the weekend.

Some restaurants across the region were already dealing with flooding after days of rain earlier in the week. But the expected storm surge threatened to raise water levels in some areas by as much as six feet if it hits at high tide.

Forecasters said up to 20 inches of rain were expected over southeast Louisiana, including New Orleans and Baton Rouge, with dangerous, life-threatening flooding possible over portions of the central Gulf Coast into the Lower Mississippi Valley, according to the National Hurricane Center of the National Oceanic and Atmospheric Administration.

Restaurant operators, meanwhile, grappled with the decision of whether to remain open and ride out the storm, keeping workers on the clock and being paid, or to allow them time off to make their own preparations at home.

Chains like Newport Beach, Calif.-based Chipotle Mexican Grill, for example, said there were no plans as of Friday to close restaurants in the region. But Greenwood Village, Colo.-based Red Robin Gourmet Burgers Inc. said three restaurants in Baton Rouge, Slidell and Lafayette would close by Friday evening to keep guests and team members out of harm’s way.

Others also planned closures out of an abundance of caution.

New Orleans-based Dat Dog, for example, has five units in the area. One in Lafayette closed on Thursday, and a second unit closed Friday. Paul Tuennerman, Dat Dog CEO, said Friday he was watching updates from the National Hurricane Center to make a decision on the remaining locations.

“We sent out communications very early this a.m. letting our crew know that coming in to work is totally voluntary and that, paramount, is that they should focus on their safety and safety of their family and property,” he said. “It’s a Catch-22 because it’s the hospitality industry and a lot of our crew depend on a consistent paycheck and those consistent tips.”

Tuennerman said it’s also unfortunate that the storm comes during a slow period. “On a good day we’re trying to keep as many individuals employed as possible and weather the financial storm until November/December with convention season,” he said, noting that the sun was out on Friday, despite the dire forecast. “You don’t want to close prematurely when it’s a beautiful day and not provide your crew with an opportunity to work.”

For the safety of our guests and staff, we will be closing at 2:00pm due to weather conditions but plan to re-open tomorrow night, Saturday 7/13 for dinner service. Stay safe and dry out there! #barryeats #remouladenola pic.twitter.com/jbGmDH4T2A

Kevin Armantrout, CEO of Lucy’s Retired Surfers Bar and Restaurant, said his brand’s location in New Orleans’ warehouse district would close at 4 p.m. on Friday and stay closed through Sunday. A second location on the Gulf Coast in Biloxi, Miss., will remain open.

“You really have to think about employee safety first, and that’s generally the consensus. Nobody wants to get stranded or for their loved ones to get stranded,” said Armantrout. “We’re making sure everybody’s safe and can get home.”

Armantrout said the 300-seat surfer-themed restaurant in New Orleans, with about 50 workers, is on the edge of the below-sea-level French Quarter and has already dealt with flooded streets earlier in the week, as well as roof leaks, from the heavy rain. “The ground’s pretty wet right now, and that’s always the worry when you have more rain coming in,” he said.

Officials with the Ballard Brands’ chain PJ’s Coffee of New Orleans, with about half of its 106 locations in the New Orleans area, said they were planning to roll with the punches.

“We are allowing our franchisees to make the call on business closures,” and team members have been told they don’t have to come in if they don’t feel safe, said Leslie Monson, PJ’s chief marketing officer. “Right now, we have some light rain and winds and, as things progress and the storm gets closer, I anticipate some locations will definitely close due to potential flooding risks.”

Monson said the chain was doing drop offs of the brand’s nitro cold brew to local police officers, fire and emergency crews. “We know it’s rough on them, and if there’s something we can do to make this helpful to them, that’s what we can do,” Monson said.

Tony Caballero, vice president of operations for 28-unit Walk-On’s Bistreaux and Bar, based in Baton Rouge, also said they were watching the storm and prepared. “If we feel that it’s dangerous for our employees to get on the road, we’ll make that decision 18 to 24 hours before the storm hits,” he said.

Out here working the line at Maypop. Come get some lunch or an early dinner before you hunker down. MOPHO and Rum and the Lash are also serving until the weather picks up or the power goes out. #barrrysadick#weoutherecookin#barryeats#barrycanalsoeata… https://t.co/ldF35OliOU pic.twitter.com/sVq7WNw4bC

Walk-On’s has experienced major floods before, so restaurants at risk have generators in place. Caballero said the company in the past set up a GoFundMe page for employees after a 2016 flood and raised more than $65,000, which helped get impacted units open quickly to feed emergency responders and locals.

“It’s part of the culture,” said Caballero. “Take care of the employees and they’ll always take care of you.”

The Tales of the Cocktail Foundation said Friday it still planned to kick off its annual convention on Tuesday, which brings hundreds of beverage experts together in New Orleans each year. “We are closely monitoring developments on storm Barry as they become available to us and will be closely working with our city and state along with all venues, sponsors, and partners to ensure that safety at Tales of the Cocktail is a top priority,” the foundation said in an email.

Wendy Waren, a spokesperson with the Metairie, La.-based Louisiana Restaurant Association, said area restaurant owners were working with the New Orleans convention and visitors’ group, New Orleans & Company, to keep a running list of eateries and other business that will be closed, open or operating on limited hours.

Stephen Perry, president and CEO of New Orleans & Company, told members in a letter Friday that “throughout the duration of this weather event, we know that some businesses will be closing as others will remain open.”

Perry urged businesses to complete the form at www.neworleans.com/barryupdate on their hours. The LRA was also using the #barryeats hashtag.

“Aggregated information will be available to you and your guests on our website,” Perry said, “at www.neworleans.com/weather-update.”

The association also offered a checklist for restaurant operators to prepare for the storm:

If evacuation is necessary:

This report was compiled by Lisa Jennings and included contributions from Joanna Fantozzi, Nancy Luna, Ron Ruggless and Bret Thorn.