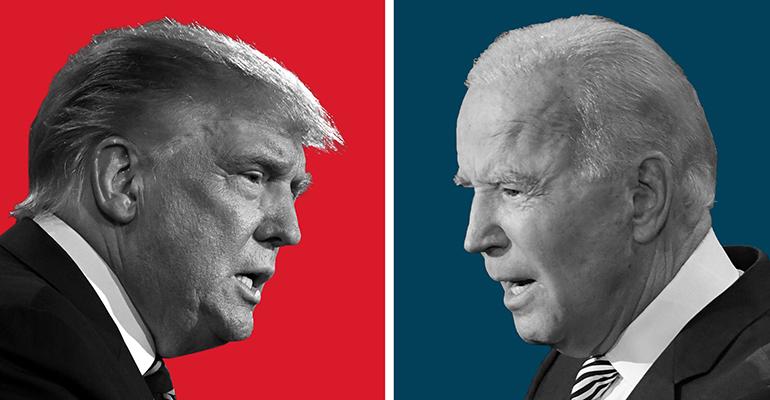 Where do the 2020 Presidential candidates stand on important issues such as immigration, healthcare, COVID relief and minimum wage? Find out.
Operations

With a global pandemic ongoing and the U.S. economy struggling to get back on its feet, the stakes in the upcoming election couldn’t be higher for the restaurant industry.

Republican incumbent President Donald Trump is being challenged by Democrat and former Vice President Joe Biden in what has been a sharply polarized campaign. Key issues that will impact the restaurant industry include things like the workforce, immigration, healthcare and — perhaps most importantly — the nation’s response and recovery from the most deadly health crisis since the Spanish Flu, and the impact of COVID-19 on the economy.

The restaurant industry is projected to lose $240 billion by the end of the year. More than 100,000 restaurants had permanently closed by mid-September, and a desperately needed federal stimulus at press time appeared unlikely until after the election.

Most Americans will have already cast their vote by Nov. 3, though we may not know the results that night. Because of the pandemic, more Americans are expected to vote by mail and some states allow ballots to be counted if they arrive within a certain period after Nov. 3.

Though election season has been filled with drama and more October surprises are expected, here’s a look at the two candidates and their basic positions on issues tied to restaurants.

Economic aid for businesses impacted by COVID-19 is a significant part of Biden’s seven-part coronavirus recovery plan. He would establish a small-business fund to ensure that mom-and-pop businesses could have equal opportunities for relief, arguing that larger corporations have already taken advantage of the Trump administration’s stimulus programs.

His fund would be a “restart package” to help businesses hire back and retrain employees and would provide grants to cover the costs of expensive protective gear and plexiglass barriers.

Biden’s federal grant programs would also specifically target minority-owned businesses to ensure that they have “effective access to all of these tools, as well as access to technical assistance — such as accounting support and legal advice — so that they are not shut out of federal aid programs.”

He also supports a nationwide mask mandate, as well as rapid testing, protective gear, and federal funding for workplaces and schools.

Biden supports raising the federal minimum wage to $15 per hour and eliminating the federal tip credit, under which tipped workers can earn as little as $2.13 an hour in cash wages. In 2015, Biden successfully lobbied for a minimum wage increase in New York State.

“He firmly believes all Americans are owed a raise, and it’s well past time we increase the federal minimum wage to $15 across the country,” Biden’s campaign website says. “This increase would include workers who aren’t currently earning the minimum wage, like the farmworkers who grow our food and domestic workers who care for our aging and sick and for those with disabilities. As president, Biden will also support indexing the minimum wage to the median hourly wage so that low-wage workers’ wages keep up with those of middle-income workers.”

The issue of raising the minimum wage has been a thorn in the side of (much of) the restaurant industry for years, but the $15 federal minimum wage is already on the books in seven states and one federal district.

For tipped workers, Biden has expressed support for ending the tip credit, the sub-minimum wage available in most states.

“Restaurants will have to figure out pricing to offset that at a time when who knows what the consumer backdrop will look like,” said Andy Barish, a Wall Street analyst at Jefferies. “I think the bigger issue underneath that issue […] is the tipped wages. Obviously, there’s no tip credit in some states but I think that tip wages will be the key issue to watch and that could have a larger impact on full-service casual dining.”

Biden hopes to build and expand on Obamacare, adding a Medicare for All public option to the Affordable Care Act as a compromise on single-payer healthcare plans proposed by the more progressive wing of the Democratic party.

“If your insurance company isn’t doing right by you, you should have another, better choice,” Biden’s campaign website said.

As with Medicare, the Biden public option aims to reduce costs for patients by negotiating lower prices from hospitals and other health care providers. It also promises to better coordinate among all of a patient’s doctors to improve the efficacy and quality of their care and cover primary care without any co-payments. And it will bring relief to small businesses struggling to afford coverage for their employees.

Biden, however, proposes strengthening employer mandates, including providing “legally mandated benefits and protections” to so-called gig-economy workers like delivery drivers, instead of classifying them as independent contractors.

Biden also supports employer mandate requiring 12 weeks of paid family and medical leave for all workers “for their own or a family member’s serious health condition,” and/or to recover from childbirth, spend time with their newborns, or to care for a sick relative.

About 12% of hospitality workers are undocumented immigrants, according to the Pew Research Center, a significant number that represents the extent to which the restaurant industry relies on these workers.

Biden has pledged to end workplace immigration raids based on workers’ status so they don’t have to be worried about getting detained or deported when they’re trying to make a living.

“The first 100 days of my administration, no one will be deported at all. From that point on, the only deportations that will take place are commissions of felonies in the U.S.,” Biden said during the 11th Democratic primary debate in March.

A Biden administration would also safeguard against “wage cuts due to the exploitation of foreign workers” by ensuring that employers are not legally allowed to hire undocumented workers below market rate.

“We must ensure that every worker is protected, can join a union, and can exercise their labor rights — regardless of immigration status — for the safety of all workers,” his platform says.

On labor unions: A Biden administration would encourage and incentivize the use of labor unions and “check the abuse of corporate power over labor and hold corporate executives personally accountable for violations of labor laws,” as well as expand workplace protections, pay and benefits for workers.

Emergency unemployment: Biden supports expanded emergency compensation for workers in affected industries, such as hospitality, that are facing extended spells of unemployment.

Scroll up or down on the photo to see an overview of each candidate's positions.

Unlike in previous presidential election cycles, the Republican Party did not create a new policy platform for the 2020 election.

Without convening its platform group this year, the Republican National Committee unanimously voted to “reassert the party’s strong support for President Donald Trump and his administration” and endorsed the 2016 platform.

The COVID-19 pandemic was declared in March, and Trump has touted his record for dealing with the deadly novel coronavirus. Since the spring, Congress has passed a series of bills offering roughly $3 trillion in aid, including the creation of the Paycheck Protection Program and other disaster loans to help businesses. But the PPP program expired at the end of July, and Trump’s stance on more relief for the deeply impacted restaurant industry was somewhat muddled at press time.

In early October, after he was released from Walter Reed Medical Center after contracting the coronavirus himself, the president said via Twitter that he was calling off negotiations on more relief beyond the summer packages.

Trump later said he would approve narrowly drafted legislation on a new round of the Paycheck Protection Program and perhaps another round of direct stimulus checks.

But three days later, on Oct. 9, he stated: “Covid Relief Negotiations are moving along. Go Big!”

In mid-October, observers were skeptical Congress and the president would approve any more stimulus before the Nov. 3 election.

The pandemic’s impact on the economy has been historic, in terms of job losses, unemployment and gross domestic product. The National Bureau of Economic Research determined that a peak in monthly economic activity occurred in the U.S. economy in February 2020, marking the end of the longest recorded U.S. expansion, which began in June 2009.

The U.S. GDP has experienced two consecutive quarters of declines, and the second-quarter decline was the steepest ever: 9.1%

The Republican Party’s 2016 platform states that any increase in the federal minimum wage, which has stood at $7.25 an hour since 2009, should remain a local and state issue.

Trump indicated before his election that he would consider a $10-per-hour federal minimum wage and in an interview with Telemundo in 2019 indicated he might consider a $15-an-hour minimum.

However, the president has not made a formal proposal on the minimum wage.

The GOP platform stands firmly for the repeal of what it calls the “dishonestly named Affordable Care Act of 2010.”

Repeal of the Affordable Care Act would also remove the menu-labeling provisions within it.

The president has repeatedly said he would replace the ACA with an improved version, but no proposals have been put forward in the past four years.

In the wake of the pandemic, Congress and the president approved the Families First Coronavirus Response Act, which requires certain employers (those with 500 or fewer workers) to provide employees with paid sick leave or expanded family and medical leave for specified reasons related to COVID-19.

The Department of Labor’s Wage and Hour Division administers and enforces the new law’s paid leave requirements. These provisions apply through Dec. 31.

“Small businesses with fewer than 50 employees may qualify for exemption from the requirement to provide leave due to school closings or child-care unavailability if the leave requirements would jeopardize the viability of the business as a going concern,” the Labor Department said.

The GOP and Trump have not indicated what support, if any, they would give to extending the sick leave or family leave.

Trump has taken a hard line on immigration, especially during the COVID-19 pandemic.

In April, the president tweeted: “In light of the attack from the Invisible Enemy, as well as the need to protect the jobs of our GREAT American Citizens, I will be signing an Executive Order to temporarily suspend immigration into the United States!”

He issued orders on April 22 and again on June 22 that suspended or limited immigration into the United States as the economy recovered from the pandemic lockdowns. The latter order will expire on Dec. 31 “and may be continued as necessary.”

“In the administration of our nation’s immigration system, we must remain mindful of the impact of foreign workers on the United States labor market, particularly in the current extraordinary environment of high domestic unemployment and depressed demand for labor,” the president said in the June order.

“Historically, when recovering from economic shocks that cause significant contractions in productivity, recoveries in employment lag behind improvements in economic activity,” he noted. “This predictive outcome demonstrates that, assuming the conclusion of the economic contraction, the United States economy will likely require several months to return to pre-contraction economic output, and additional months to restore stable labor demand.”

Trump said he had “determined that the entry … of certain aliens as immigrants and nonimmigrants would be detrimental to the interests of the United States.”

The GOP 2016 platform cited employment-enhancing legislation for people with disabilities and military veterans, but it steered clear of other employee-related proposals such as sick leave and family leave