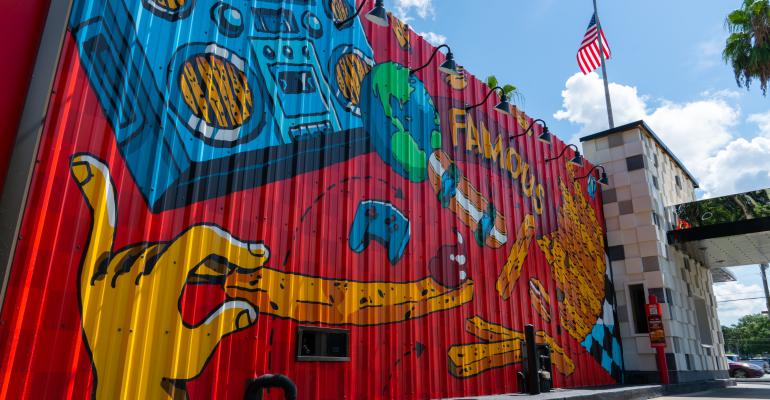 Checkers and Rally's CDO Kris McDonald feels optimistic about the company's growth even as more brands adopt its model because it doesn't have to test, it can just "tweak and refine" what already exists.

The pandemic shifted consumer habits at a pace not seen in modern history. For restaurants, that shift mostly meant off-premises accessibility, which proved to be an advantage for drive-thru-centric concepts Checkers and Rally’s.

In fact, the restaurant company experienced “stellar sales” throughout the past two years because of its footprint, according to Vice President of Development Kris McDonald, and that momentum yielded a record for development commitments to close out 2021. This year has been a bit slower, with construction, permitting and supply chain delays, but the pipeline remains robust. McDonald said the company will open close to 40 domestic units this year, about 50 next year and “hopefully” 70 in 2024.

Related: The evolution of a post-pandemic restaurant drive-thru

As the company continues to expand its presence, it is facing more competitive pressures than perhaps ever. Drive-thru business skyrocketed during the pandemic as dining rooms closed. According to The NPD Group, drive-thru visits increased by 20% from February 2020 to February 2022, for context. As such, several brands hastily began adopting drive-thru-heavy or drive-thru-only models, similar to Checkers & Rally's traditional format.

“We are in a unique position because we can’t rest on our laurels. People are now moving into our footprint with modular and more drive-thrus. They’re looking to model us so it’s up to us to make sure we stay ahead of that curve,” McDonald said during a recent interview.

She believes the company is in a good position to do just that.

“We’re not testing. This has always been our prototype. We can just tweak and refine what we have already had throughout our history,” she said. “We like to say because we’re tried and proven, we’re not going from a 2,800-square-foot restaurant down to 1,000 square feet and training for that. We already know how to do all that and now we’re just trying to make it better and more efficient.”

To "make it better," Checkers/Rally’s is adding double drive-thrus on both sides of its restaurants and dedicating one of those lanes to ecommerce orders. Its first such restaurant, which opened earlier this year, has exceeded average system sales and expectations, according to McDonald (the company is private and does not disclose specifics). Further, operators can toggle that ecommerce option off during high-traffic periods without a lot of digital orders coming through. This tends to be the case during lunch, whereas much of the company’s ecommerce activity comes at night.

“We wanted to create flexibility for our franchisees and we are seeing the demand to support all of this,” McDonald said. As such, 85% of the company’s development pipeline will feature this format.

The company is also investing in “tired” assets with a reimaging program, which has yielded a “nice sales lift,” McDonald said, and energized franchisees. And, of course there’s the technology piece, too. Checker/Rally’s is one of the first restaurant brands to test the waters on artificial intelligence technology at the drive-thru, rolling out a voice assistant solution earlier this year. McDonald said it’s still early, but adds the technology has helped fill labor gaps (several hours a day) and simplify operations.

“Now the person running the window has more time to interact with the customer to greet them, make sure their order is right – all the things we want to do,” McDonald said. “We’re also finding that accuracy is better and our team loves it. They test her all the time, changing orders, changing accents.”

The company continues to understand how AI can change messaging for certain dayparts or upsell customers.

“What’s the magic sauce? We’re still learning and tweaking,” McDonald said, adding that about 150 corporate stores now have the technology integrated into their drive-thrus, and franchisees have the option to add it. She does believe it will eventually rollout systemwide based on early results.

Checkers & Rally’s is also focusing on its back-of-house efficiencies. Last year, the company tapped an outside firm to launch a motion study through a “fake kitchen.” The company concluded team members were walking one full mile more than they should be during a shift.

“That’s obviously a lot and not very efficient, so we reconfigured our kitchens to take some pressure off the fry station in particular, which set us up for success. That person on fries is freed up a little and it’s just made things easier on them,” McDonald said.

The company is preparing to conduct a similar study again to continue making such improvements and, ideally, ease some labor pressures. All of these efforts support the company’s mission to “not rest on its laurels” as competition intensifies in its space. McDonald is plenty optimistic that mission will be accomplished.

“We have so much room to grow and so much potential. We’re in about 30 states now and still have a lot of room to grow in the markets we’re in,” McDonald said. “We’re always looking for the next improvement. The moment we think we’ve arrived is the moment we let our guard down. With the kitchen and tech and tired asset refresh, I think what you’re seeing is we're not sitting back and resting."