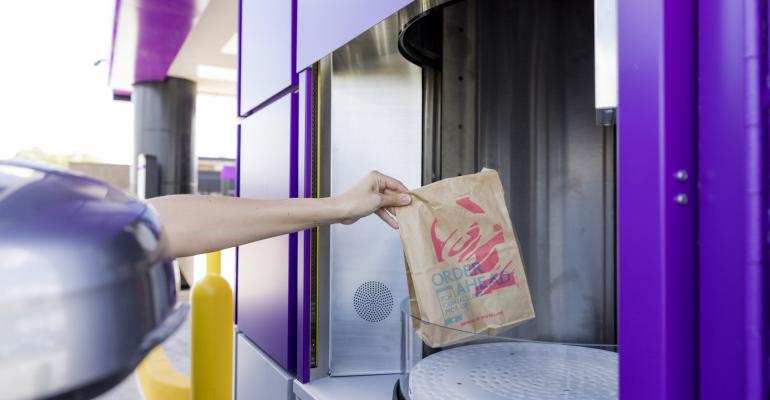 At the Taco Bell Defy, orders pop down from the second-floor kitchen in the modern equivalent of a dumbwaiter.
Operations>Delivery & Takeout Solutions

The evolution of a post-pandemic restaurant drive-thru

If Americans didn’t love picking up food without leaving their cars before the pandemic, they certainly do now.

In a July report, consumer behavior watcher Revenue Management Solutions, or RMS, said drive-thru represented about 75% of quick-service sales, down from more than 90% at the height of the pandemic when restaurant dining rooms were closed. But, even as dine-in returned, restaurant operators across the industry said their drive-thru business has remained strong.

Between the first and second quarters this year, drive-thru revenues declined 10.3%, while dine-in (up 2.8%), takeout (up 1.6%) and delivery (up 0.5%) grew, according to RMS. But skyrocketing gas prices were in part to blame, and drive-thru business was expected to pick up for the summer. RMS surveys indicated 21% of consumers planned to visit drive-thrus “more” or “much more” in the near future, up from 16% who said the same in the first quarter.

In fact, with consumers reluctant to give up the convenience of drive-thrus, now traditionally dine-in and carryout brands, like Applebee’s and Auntie Anne’s, are getting into the drive-thru game.

“Adding a drive-thru allows us to serve our guests even more conveniently and we are thrilled to be the first Fuzzy’s Taco Shop to do so,” said Richard Maddox, owner of a Fuzzy’s in Auburn, Ala., that is home to that chain’s first drive-thru location when it opened in July.

But for chains that have long competed for drive-thru business, the question is not necessarily whether to offer a lane for cars but what features those lanes should have and how many.

The post-pandemic drive-thru is a far cry from the “talk to the clown” squawk box of decades past. Restaurant drive-thrus have evolved tremendously, with chains adding sophisticated technology to smooth the process.

Speed and ease of service are goals, of course, but with more restaurants looking to add drive-thru access to properties, they are also under more pressure to prevent the buildup of lines of cars that can block streets or parking areas and draw complaints.

That has some brands eliminating the food-ordering process from drive-thrus altogether, creating lanes for digital-pickup only, which avoids the notorious slowdown of guest decision making at the order point.

Chipotle Mexican Grill has been leading this trend with its Chipotlane locations. The 3,000-unit chain has more than 400 units with Chipotlanes, which are designed only for digital order pickup.

Last year, the company opened 215 new restaurants, and about 80% featured a Chipotlane. Over the past three years, the chain has added Chipotlanes to about two dozen existing units, with another dozen scheduled for conversion this summer and more in the pipeline, company officials said.

Chipotlanes have been a game changer. New units with a Chipotlane tend to average sales about 15% higher than non-drive-thru locations. Adding a drive-thru lane to an existing unit can increase sales by 5-6%, compared to the unit’s pre-drive-thru performance.

Other brands are following the digital-order-only emphasis for their drive-thrus.

Chick-fil-A in June said it is testing express drive-thru lanes that will be available for mobile orders only. Guests can use the app to scan a QR code and pull around the building for pickup, thus avoiding the slowdown of waiting for others to place orders through the traditional drive-thru. The chain is operating the express drive-thrus at about 60 units, with a larger rollout expected next year.

Jimmy John’s earlier this year also debuted a drive-thru-only prototype in Bartow, Fla., a dual-sided unit with a lane dedicated to digital orders. Guests also have the option of getting out of their cars and walking in to pick up their food from carryout lockers.

Checkers and Rally’s, a brand known for its double drive-thrus, has begun converting one lane where possible to digital-order pickup, while still keeping a traditional drive-thu lane where guests can order their meals. 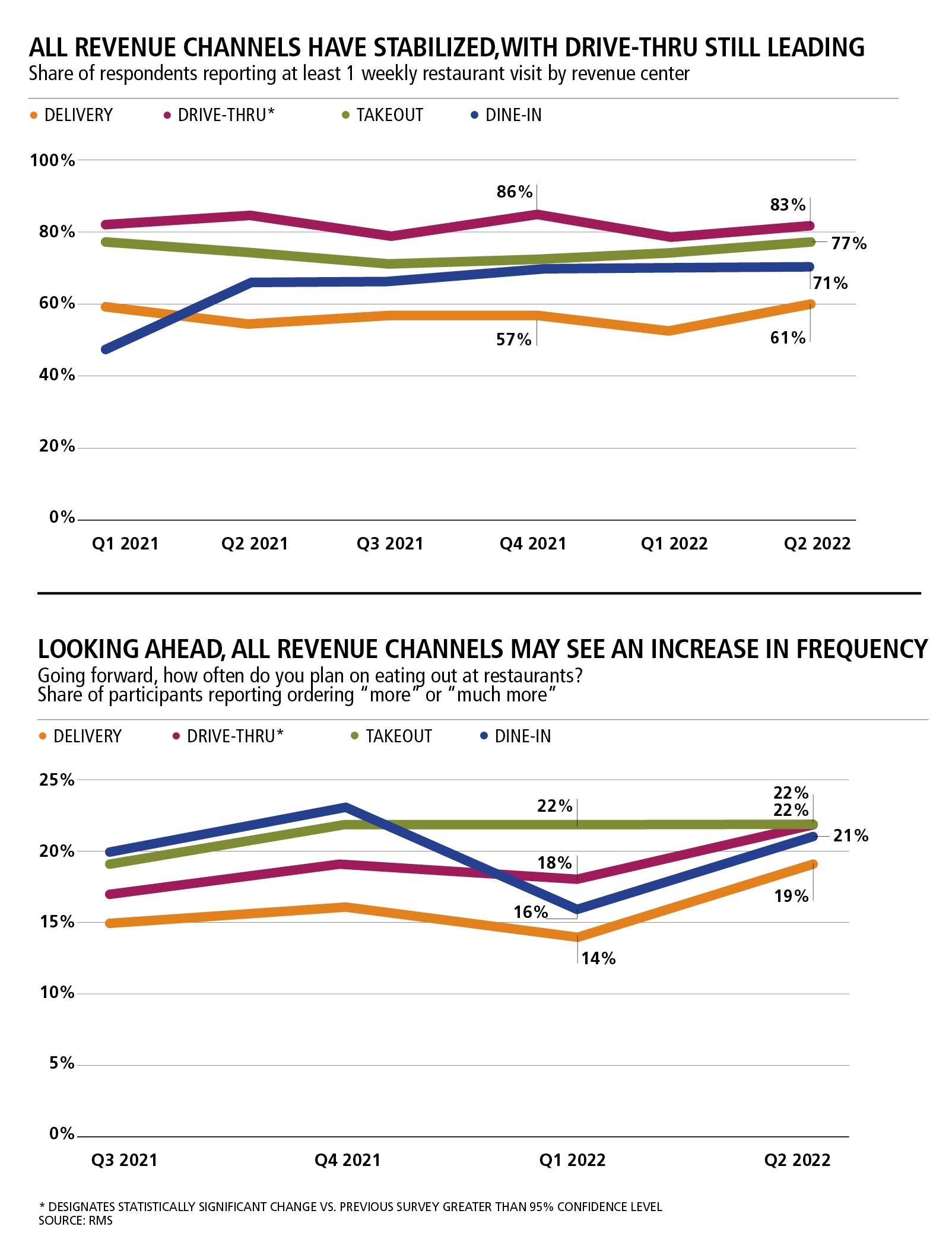 The brands include 812 restaurants, of which 780 have drive-thrus. Today, 347 units have been converted to include one lane dedicated to “e-commerce,” and the company said it is encouraging franchise operators to continue the conversions.

“Not only is demand for drive-thru growing to meet shifting consumer preferences around speed and convenience, [but] so too is the ability to order ahead for an even faster pickup,” said Brad Williams, Checkers/Rally’s vice president of franchise restaurants. “Our dedicated e-commerce lanes provide that option, while also allowing our team to anticipate orders ahead of time, decrease assembly times for key products and service those orders with less dedicated staff.”

One chain the industry is watching is Taco Bell, which opened its long-awaited Defy model earlier this year in Minnesota.

Opened by franchisee Border Foods in June, the new Taco Bell Defy is a two-story restaurant with a four-lane drive-thru that runs under the building. Guests can pull in, scan a QR code and their Crunchwrap and Wild Cherry Freeze pops down from the second-floor kitchen in the modern equivalent of a dumbwaiter. The unit was projected to cut the chain’s average drive-thru times in half to about two minutes.

The Defy model has one traditional drive-thru lane, where guests can order, but the other three are dedicated to digital orders.

Lee Engler, cofounder and CEO of Border Foods, said the response has been very positive. “Our estimated throughput of the current Taco Bell Defy prototype is [two to three times] that of our standard restaurants with an increased amount of ecommerce sales,” he said.

Mike Grams, Taco Bell’s president and global chief operating officer, added that the new Defy unit has attracted a surplus of talent hoping to work at the futuristic unit. Now the company is looking at how to scale a potential Taco Bell Defy 2.0, and Border Foods is looking at ways to retrofit its existing units with certain aspects of the Defy model.

Diversified recently opened its first Go Mobile location in Las Vegas, where the franchisee is based. That unit has a double drive-thru with one lane dedicated to digital and delivery orders.

So far, about 60% of drive-thru business at the unit comes through the traditional lane, where guests can order. But in the digital-only lane, there is no wait — which Lepe said will further drive adoption because it offers a better experience.

That’s key for delivery drivers in particular, as they are increasingly selective and are more likely to jump on orders for restaurants “where they know, if they pick up that order, they’re going to have a fast and seamless experience,” he said.

“[It used to be] I might come late at night into the drive-thru and there might be four delivery orders ahead of me,” said Lepe. “Now those customers are not being penalized. We’re trying to create a win-win for those who really leverage the digital option.”

The challenge of stacking

Brands like Taco Bell and Chipotle, however, have been steadily building their digital business for years. Chains like Arby’s are at the early stages of digital sales growth.

Arby’s franchisee Anoop Kang, CEO of Kang Foods LLC, recently opened his company’s first dual drive-thru unit in Oroville, Calif., with two order points that merge into one lane for payment and pickup. Digital pickup wasn’t a priority, he said, but the unit could be converted later as Arby’s builds digital sales.

Kang’s goal was adding more stacking onto the restaurant’s property to improve flow. The unit can accommodate about 18-20 cars on the property without blocking the street or angering neighboring businesses, he said.

“The lines are pretty long, but we’re happy about how it has turned out so far,” he said.

The operator of six Arby’s, he estimates that about 70% of sales come from the drive-thru at traditional units, but he expects the dual drive-thru to do about 80%.

For Kang, the stacking problem was his primary pain point. Chains like Chick-fil-A, In-N-Out Burger and Starbucks — with their massively popular drive-thrus — are giving car lanes a bad reputation.

“A lot of cities in California are getting stricter with their drive-thru approvals,” he said. “You do need more space for a double … but it’s worth the investment. We’ve seen our drive-thru cars and revenue go up steadily.”