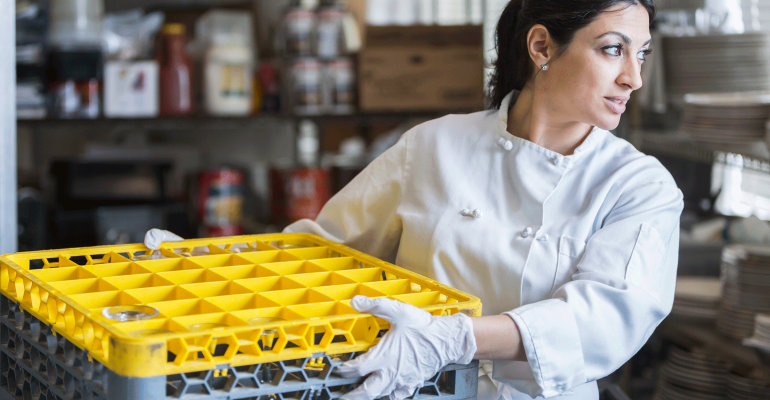 Easing the pain of a tough labor market

Perennial challenges like competition for talent and high turnover rates have combined with recent market shifts like the gig economy and the rise of delivery to add new complexities to restaurant operators’ labor challenges.

David Cantu, HotSchedules’ co-founder and chief custom officer, addressed some of the trends impacting labor costs during the conference.

The unemployment rate is just under 4 percent nationally and has dropped below 2 percent in some cities, he said. Yet restaurants continue to grow.

“I do believe unemployment for the significant future will continue to remain low,” he said.

And 40 percent of hourly turnover occurs in the first 90 days, TDn2K data indicates.

Cantu said 75 percent of turnover in the restaurant industry is voluntary, in part because wages are too low.

“For an additional dollar, they’ll go across the street to another job,” he said.

Many restaurant workers are probably also working part time in gig jobs, like Uber and Task Rabbit, he said.

A key initiative to optimizing labor is accurate forecasting, he said.

For a restaurant trying to forecast labor needs, a 5-percent variance in accuracy can result in a 1-percent increase in labor spend, Cantu said.

Other exhibitors on the NRA Show floor were also addressing the labor problem.

Harri, for example, got its start as a recruitment tool but has evolved with broader labor management functions. New at the show is an app for managers that allows them to access the labor management dashboard on their smartphones, including the ability to forecast labor.

The recruiting site Snagajob is also evolving. In April, the company changed its name to simply “Snag,” and it is moving into shift work on demand.

Last year in Richmond, Va., Snag launched shift work services in which workers can be called in to fill hourly positions, like dishwashers or bussers, as temporary workers. Snag takes on the labor costs, helping restaurants fill holes in their staffs quickly.

The program launched in the Washington, D.C. area in April, and Snag hopes to bring the service to new markets going forward.

ShiftPixy, which pioneered shift work on demand, meanwhile, is also expanding its services to help restaurants take control of delivery.

The company matches employers with delivery drivers to allow restaurants to do that last-mile delivery themselves, said Steve Holmes, co-founder of the Irvine, Calif.-based company.

“We know we live in the delivery economy, and that’s only going to grow,” said Holmes.

“Every time they hand over that sack of sandwiches to a third party, they’re releasing the customer experience,” Holmes said. “This will allow the restaurant to complete that delivery.”

Using ShiftPixy, restaurants can put their own branded, uniformed workers into the platform. ShiftPixy will handle the driver validation, including insurance and liability coverage on the driver’s car, which is a key barrier to self delivery, said Holmes.

The feature is in test in Southern California, and ShiftPixy expects to roll it out into other markets. Currently, ShiftPixy has a presence in California, Texas, Chicago and Florida.