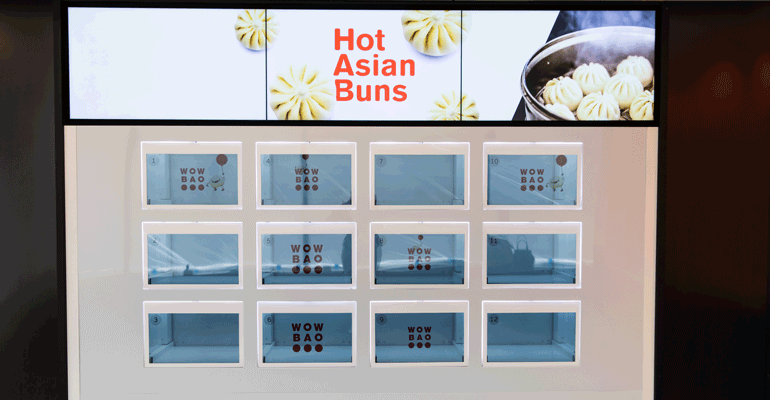 In the battle of 'man versus machine,' restaurants win

Geoff Alexander, president of Wow Bao, said his life changed when he went to vote in the 2008 election.

After waiting in line to get into a polling station, then facing long lines at the booth itself, Alexander was directed to a digital voting booth for the first time. “It was like, ding, ding, ding, and I was out in seconds. I thought to myself, ‘Why aren’t we doing this in restaurants?’”

Soon at Wow Bao they were. The Lettuce Entertain You Enterprises-founded concept in Chicago began exploring the use of self-ordering kiosks, first as an alternative to ordering at the counter. Now all new Wow Bao stores will be more automated, allowing guests to order from their smart phones or on in-store kiosks, with food being placed in animated LED-lit cubbies for pick up.

Alexander was one of four panelists sharing their experiences with automation in a session titled “Man versus Machine.”

Though the move toward automation has allowed Wow Bao to save on labor by eliminating cashiers, Alexander said, “We did not get rid of people.”

Wow Bao, for example, has a front-of-the-house host available to help guests or answer questions. Because guests move more quickly through the process, expediters are less harried and therefore more hospitable.

Brian Berger, CEO of the new virtual food hall Sous Vide Kitchen in New York agreed, saying his concept was developed to improve both food safety and product consistency at a time of higher labor costs and a shrinking labor pool.

The company was founded in 2012 with the fast-casual concept BONMi, offering Vietnamese-inspired baguettes and bowls. Developing tech systems for BONMi led Berger to explore the launch of other concepts for delivery-only. At Sous Vide Kitchen, guests can use a bank of kiosks to order from the menu of four concepts, all prepared from the same efficient kitchen.

Guests can order a customized pizza online or at a kiosk and the crew puts the pizza in a heated portal. The customer uses a QR code or three-digit code to open the portal to pull out their order.

Kris Bartel, chief business development officer for Zivelo, said he does not recommend that restaurant operators see kiosks as a labor solution. Rather, he said his clients see a return on investment through ticket lift, often up to a 20 percent to 30 percent increase.

Not only can the technology improve throughput, automated ordering systems are guaranteed to upsell, always asking if a customer wants fries, for example, when a human may forget.

The panelists also noted the potential for data collection. Wow Bao, for example, asks guests for an email, which the company then uses for targeted marketing.