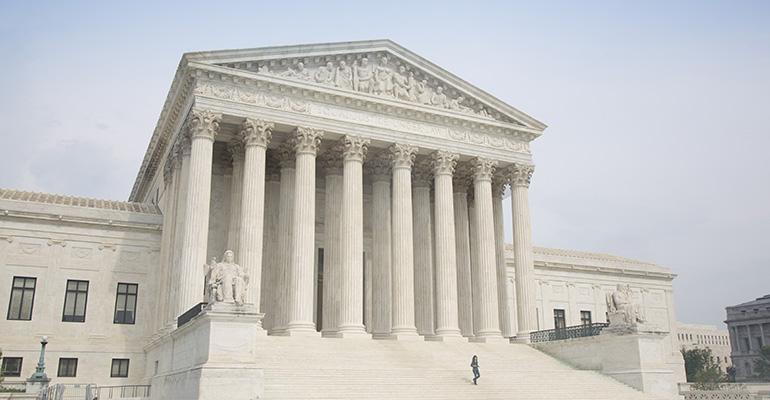 Grant Faint / The Image Bank
The new court ruling establishes that a gay or transgender worker could sue for discrimination seeking a broad range of remedies and damages available under the federal law.
News

The Supreme Court on Monday ruled that gay and transgender workers are protected from employment discrimination under the Civil Rights Act of 1964, handing a major victory to LGBTQ advocates during Pride Month.

In a vote of 6 to 3, the ruling established that Title VII of the federal Civil Rights Act prohibiting discrimination based on “sex” applies to both sexual orientation and gender identity, not just biological gender.

“This is a big deal,” said labor attorney David Miller with law firm Bryant Miller Olive in Miami. “This is a major expansion of the understanding of what Title VII protects at the Supreme Court level.”

For employers, the ruling establishes that a gay or transgender worker could sue for discrimination seeking a broad range of remedies and damages available under the federal law.

Miller noted that some states, like Florida, have civil rights laws that mirror or refer to the federal Civil Rights Act. So the Supreme Court decision could immediately alter state interpretations of sex discrimination as well.

The ruling also broadens the remedies and damages available to those who allege discrimination beyond what might be protected locally, he said.

“Miami Beach has a local civil rights ordinance that protects sexual orientation,” he said. But such laws are sometimes limited in the kinds of remedies they offer. Some, for example, would not offer damages for emotional distress, for example.

“Now you’ll have a full panoply of damages under the federal law,” said Miller. “What this will mean in places that previously you couldn’t sue under state or federal law is that suddenly all the remedies and damages that go along with Title VII — which are quite broad — will now be available to that kind of plaintiff.”

The Supreme Court ruling was based on a group of cases involving both workers who were fired for being homosexual and for being transgender.

In Bostock v. Clayton County, Ga., for example, a county employee named Gerald Bostock was fired after he began participating in a gay recreational softball league. The 11th Circuit that includes Georgia initially held that Title VII does not prohibit employers from firing workers who are gay, so the courts there had said Bostock’s lawsuit could be dismissed, though in other circuits, similar suits were allowed to proceed.

In another case involving Altitude Express Inc., skydiving instructor Donald Zarda was fired after mentioning he was gay. In a third case, the R.G. & G.R. Harris Funeral Homes fired Aimee Stephens who presented as male when she was hired but later informed her employer she planned to live and work as a woman.

Opposing attorneys and the Trump administration argued that the term “sex” in Title VII in 1964 referred to the biological distinctions between male and female, and that any further legal protections for gay or transgender workers should come from Congress in the form of a new law.

The Supreme Court’s majority opinion, however, brings to rest a long-running dispute on the issue among court circuits, holding essentially that the biological characteristics of gender play a role in discrimination based on sexual orientation and gender identity.

“If you’re discriminating against a man who is attracted to other men, the fact that he’s a man is an important piece of the equation,” said employment attorney Megan Walker of Fisher Phillips in San Diego.

Walker said employers should revisit their anti-discrimination policies and training to make sure it’s clear that workers who are gay or transgender have the same protections as those based on race, religion or national origin.

The Supreme Court’s ruling is important in that it offers clarity. “When a law is resolved and employers know what to do, that’s a good thing,” she said.