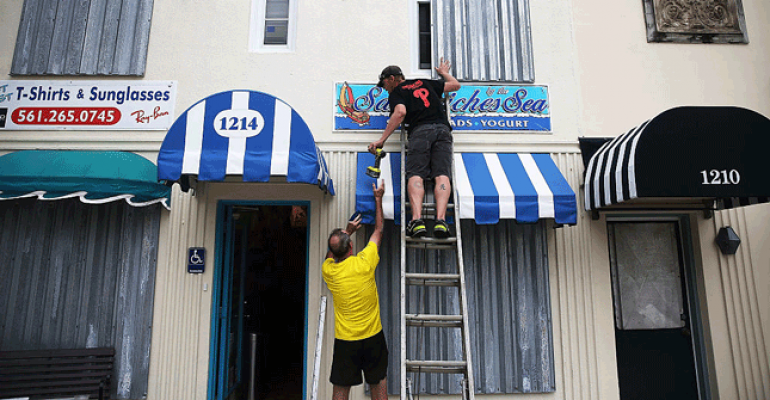 Restaurants in the southeastern United States enacted storm protocols in preparation for Hurricane Matthew, which has killed at least 113 people in Haiti, the Dominican Republic and St. Vincent and the Grenadines, hit the Bahamas Thursday and headed to Florida. The National Weather Service issued hurricane warnings for coastal areas north of Miami and into South Carolina Thursday, with severe weather warnings such as coastal flooding advisories as far north as Maryland.

He’s the co-CEO and founder of Grove Bay Hospitality, which operates restaurants in south Florida. Among them is Glass & Vine in Coconut Grove’s Peacock Park 500 feet from the water with 70 percent of the seating outside. It’s closed for Thursday, and the eight 8- to 10-foot umbrellas that provide shade were disassembled and brought inside. However, Garcia-Menocal said he hoped to reopen the restaurant on Friday.

“The bad thing for that restaurant, if [the hurricane] hits us, is we spent roughly $60,000 just making the garden beautiful, and that’s not covered by insurance. So that wouldn’t be good.

“We’re taking a lot of precautions,” he added. “We’re very flexible with staff in terms of them being able to go home and take care of things.”

Firehouse Subs, a 950-unit sandwich chain based in Jacksonville, Fla., has 80-90 restaurants in the storm zone, according to CEO Don Fox.

“We’re preparing for the worst, hoping for the best,” he said. Company-owned restaurants in Jacksonville are closed as restaurant workers evacuate. “Then hopefully, if the storm stays far enough east, we’ll be open on Saturday.”

He said he expected power outages to be the biggest challenge, which could cause spoilage of product and delays in getting resupplied. He added that there have already been distribution delays because trucks are prohibited from being on roads when wind speeds are too high.

Power outages affecting more than 10,000 customers were being reported in Broward County, Miami-Dade and Palm Beach by Thursday afternoon, and wind gusts of 59 miles per hour were being reported in Fort Lauderdale. The Air Force had clocked sustained winds of 140 mph off the coast, according to the National Hurricane Center, which defines wind speeds faster than 110 mph as a “major hurricane.”

Darden Restaurants, based in Orlando, Fla., activated its Hurricane Task Force on Tuesday, according to senior director of communications Rich Jeffers, adding in an email that they have been “monitoring the storm around the clock.”

“We conduct two calls per day with our operations leadership to determine restaurant closings and to help make other decisions such as what restaurants need to be boarded up.”

He said most of the company’s restaurants along the Florida coast from Ft. Lauderdale to Daytona Beach were closed on Thursday morning, and they closed most of their restaurants in the Orlando area after lunch.

“Most of our restaurants along the coast north of Daytona Beach will be closed on Friday,” he added.

Beef ‘O’ Brady’s, based in Tampa, Fla., also started hurricane communications on Tuesday, according to vice president of training Carol DeCanio. She said about 100 of the chain’s 188 restaurants were in areas that could be affected by the storm and began advising them to start bagging and stocking ice and making arrangements with local ice companies and food distributors. They also sent out checklists for pre-storm efforts such as moving furniture and covering the point-of-sale systems, and post-storm lists such as honoring curfews and checking with local authorities about boil-water orders, as well as procedures for ringing up checks manually in the case of power failures. Employees were given handouts that included the management teams’ cell phone numbers in case store phones stopped working.

“Better be safe than sorry,” she said. “Riding out the storm is not the best plan in most cases.”

Miami operator John Kunkel of the 50 Eggs group said he was keeping stock low to help reduce spoilage and using sand bags and storm shutters to protect the restaurants, and also making sure that employees had the time necessary to take care of their own family and homes.

“We have not purchased additional inventory the last few days to sell off as much as possible in case we lose power,” he said, noting they had closed their four venues on Thursday at least through Friday morning.

“We have removed all patio furniture and anything that can fly away. We have brought dry ice for all refrigerators, and raised as much of the furniture as possible in case of flooding. All electronic devices have been unplugged for safety.

“We will be keeping an eye on the streets for flooding and call the city if we see it gets bad,” he added.

Some weather forecasters have said this could be the worst storm to hit the region in decades and Fox of Firehouse Subs said locals were taking the storm very seriously. “Even if the eye stays offshore, you’re still going to have hurricane-force winds that are going to push inland. It’s going to be disruptive,” he said.

On the positive side, he noted, “Restaurants on the periphery of these things typically just get crushed with business” as many restaurants at the heart of the storm are closed and periphery populations are boosted by evacuees. “And of course there’s a big social component,” in which people under stress want to be with others.

New Orleans restaurateur Ti Martin, who operates Commander’s Palace and other restaurants that were badly affected by hurricane Katrina in 2005, said she would like to see restaurants be better prepared to come to each other’s aid during times of crisis.

Martin said she had the experience to advise them about insurance and the logistics of reopening.

“Restaurants are the glue that brings communities back together. At least they were here. Getting those restaurant open and giving people a place to get back to normal life and be together and see each other and reconnect is critical,” she said, and advocated an adopt-a-restaurant program.

“What if, as the restaurant industry, we could get a sign-up of every restaurant that has trouble, and we adopt a restaurant? If you’re wiped out … the rest of us in the country could pick one and call them and say ‘What do you need?’

“I mean, I can’t help 100 restaurants, but I can help one, and if everybody helps one we can help them get back on their feet quicker.”

“I can help immediately by sending people to help and rebuild and literally muck out. We can do everything from the physical to raising money to helping you work through the range of issues you’re going to have in logistics and finances and insurance to get reopened.”

Waffle House, the Norcross, Ga.-based family-dining chain, is famous for keeping its restaurants open during storms, but at press time, the chain had closed 12 restaurants along the I-95 corridor where the storm is projected to travel, with more units likely to close in coastal areas from Jacksonville, Fla., to Savannah, Ga., and up into South Carolina as the storm progresses, according to spokesman Pat Warner. He said high winds might also result in closures in Orlando, Fla.

“This one is very big, and it’s going to affect a wide area, and we have a lot of restaurants in that area,” Warner said.

All of the restaurants in the area are company-owned, he added.

Warner said that, as a 24-hour restaurant, Waffle House is not used to closing, and has a storm checklist that includes procedures for how to close restaurants.

“Our reputation is that we don’t like to close, but, obviously, if a restaurant is in the storm’s path, we’re going to close it down and come back when it’s safe,” he said.

After the storm, the goal is to reopen restaurants as quickly as possible.

“After the storm, we bring a lot of resources in and try to get as many open as possible. We will be bringing construction resources in, generators, IT support [and] food-safety experts to help the local operations team to get back open,” Warner said.

Teams of operators from outside the storm area — from Alabama, Georgia and North Carolina — were already in place to come in after the storm, he said.

There are a total of 1,825 Waffle House restaurants nationwide.