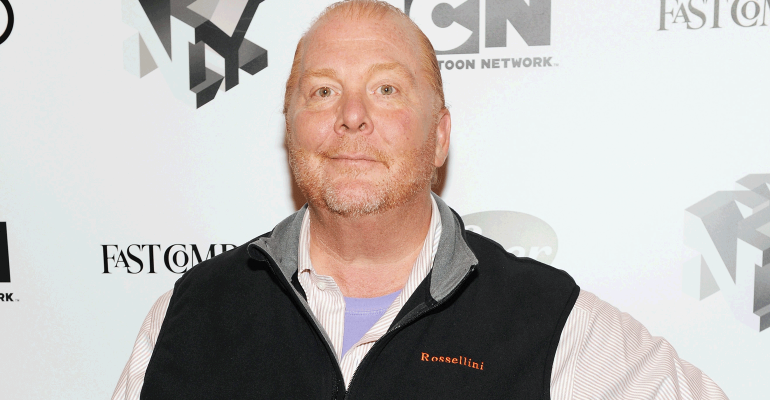 The high-profile chef and restaurateur Mario Batali on Monday stepped down from operations of B&B Hospitality Group following allegations that he sexually harassed four women, according to a report in Eater New York.

The women, including three who worked for Batali in the past, shared stories of being groped and touched inappropriately, the report said. One former employee said the chef repeatedly grabbed her from behind and held her tightly against his body. Another said he grabbed her breasts at a party.

The report did not identify the alleged victims because of concerns about retaliation.

Batali — who is known for the restaurants Babbo Ristorante and Del Posto in New York and as a co-host on “The Chew” — issued a public apology and did not deny the allegations, according to Eater.

“I apologize to the people I have mistreated and hurt. Although the identities of most of the individuals mentioned in these stories have not been revealed to me, much of the behavior described does, in fact, match up with the ways I have acted. That behavior was wrong and there are no excuses. I take full responsibility and am deeply sorry for any pain, humiliation or discomfort I have caused to my peers, employees, customers, friends and family,” he said in a statement.

Batali added that he will have to work to regain the trust of those he has hurt and disappointed.

“We built these restaurants so that our guests could have fun and indulge, but I took that too far in my own behavior,” he continued. “I won’t make that mistake again. I want any place I am associated with to feel comfortable and safe for the people who work or dine there.”

Batali has been reprimanded for inappropriate behavior in the workplace in recent months, and the chef was required to undergo training, according to the report. The company has had sexual harassment policies and training for over a decade, including a detailed procedure for reporting complaints.

In a statement, Batali’s New York-based multiconcept group B&B Hospitality said the allegations are being taken very seriously and that the decision for Batali to step down was mutual.

“Mr. Batali and we have agreed that he will step away from the company’s operations, including the restaurants, and he has already done so,” the company said. “We pride ourselves on being a workplace for our employees where they can grow and deliver great service with equal opportunity and free from any discrimination. We have strong policies and practices in place that address sexual harassment. We train employees in these policies and we enforce them, up to and including termination.”

B&B also said it has hired an outside corporate investigations team, T&M Protection Resources LLC, to independently investigate complaints and report to outside counsel. The move is a step beyond current policies and practices to “ensure all employees feel comfortable and empowered to report issues,” the statement said.

Batali is a partner in B&B along with Joe and Lidia Bastianich. In addition to nearly a dozen restaurants in New York, the group operates the concepts Carnevino, Otto Enoteca Pizzeria and B&B Ristorante in Las Vegas.

On the West Coast, B&B is a partner in the restaurants Osteria Mozza and Pizzeria Mozza along with Nancy Silverton.

Silverton in a statement described Batali as "a man with boundless bravado and a man with flaws.

"Sexual misconduct of any kind is unacceptable in our workplaces, on any level, and I simply do not stand for it," said Silverton, noting that "all of the restaurants we own together are led by women. From me and Dahlia Narvaez to Liz Hong and Sarah Clarke."

She noted that Batali has stepped aside from her restaurants as well. "I will continue to lead the restaurants as usual and remain focused on doing what we love — bringing people great food."

Batali is also an investor in the Italy-based Eataly chain’s U.S. division, which recently opened its fifth location in Los Angeles, with another planned for Las Vegas.

According to the report, some of the alleged harassment occurred while Batali was chef at the now-defunct restaurant Pó in New York during the 1990s.

Steve Crane, who co-owned Pó with Batali, told Eater that multiple staff members at the restaurant had told him of Batali’s ongoing inappropriate behavior. Crane said he told Batali to stop but didn’t have power to fire him, though Batali told Eater that Crane never confronted him.

According to the Eater report, some employees said that Batali would only become more aggressive after Crane asked him to stop, and others said Batali was at his worst when he was intoxicated.

Batali is the latest in a string of high-profile men to be accused of sexual harassment across a number of industries. In the restaurant world, those accused include chef and restaurateur John Besh and pastry chef Johnny Iuzzini.

Data indicates that sexual harassment is more prevalent in the hospitality industry than any other, based on complaints to the Equal Employment Opportunity Commission, or EEOC.