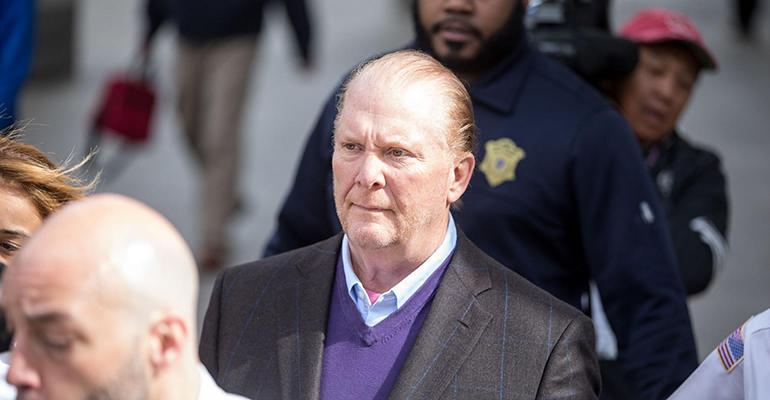 The disgraced celebrity chef who has been accused of sexual misconduct from several sources but was acquitted in May, agreed to settle the two cases against him

Former Food Network star Mario Batali agreed to settle two sexual misconduct lawsuits with women who accused the disgraced celebrity chef of touching them inappropriately in separate incidents in 2016 and 2017, according to an Aug. 9 docket entry that canceled an upcoming conference due to the case being “settled,” as first reported by CNN. According to a joint Aug. 12 court filing, both parties “were in the process of resolving the case and anticipate filing a stipulation of dismissal with prejudice."

Attorneys Eric Baum and Matthew Fogelman, who represent the women in both cases told CNN in a statement, "The matters have been resolved to the satisfaction of all parties. We cannot comment further due to confidentiality obligations."

In May, a judge in Suffolk County Superior Court in Boston acquitted Batali of indecent assault and battery after the food personality waived his right to a trial by jury. The first alleged victim, Alexandra Brown, sued Batali in 2019, accusing him of groping and forcibly kissing her when she asked to take a photo with him at a Boston restaurant in 2017 and he pleaded not guilty to the criminal complaint in Boston Municipal Court in 2019.

This criminal complaint followed a civil complaint filed by plaintiff Natalie Tene, who sued Batali in August 2018 for an incident at a Boston restaurant in 2017 in which he allegedly “rubbed her breasts, grabbed her buttocks, put his hands between her legs and groped her groin area, and kept forcefully squeezing her face into his as he kissed her repeatedly."

At the time of his acquittal, Batali’s lawyers argued that Brown wasn’t credible because she once claimed to be clairvoyant to get out of jury duty.” Meanwhile, according to the Associated Press, she testified at the time that the 2017 alleged incident of sexual battery “was all happening so quickly and it was happening essentially the whole time.”

If convicted, Batali would have faced up to two and a half years in jail and would have had to register as a sex offender. He has consistently denied all allegations.