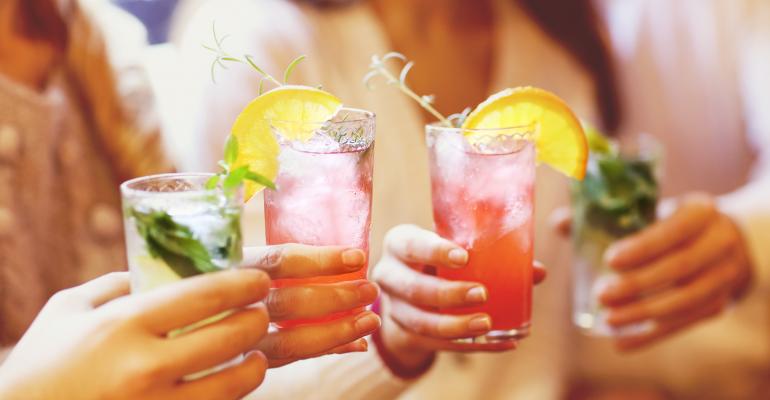 To boost their beverage programs, restaurant operators are taking a deep dive into culinary-inspired cocktails and nonalcoholic drinks.

The result is a crop of exciting new signatures distinguished by fresh, savory ingredients such as rhubarb, cucumbers, oats, roasted tomatoes and kimchi, together with kitchen techniques like pickling, preserving and smoking. Such flavoring flourishes are joining the beverage innovator’s tool kit alongside house-made and prepared syrups, purees, bitters and shrubs.

Adding culinary context at the bar

With the arrival of spring, Big Jones is introducing cocktails flavored with fresh ingredients and retiring robust winter cocktails marked by cooked and preserved flavors. Soon to appear is the Rhubarb Julep, a bourbon cocktail which showcases two gifts of the season — fresh rhubarb and mint. The former is preserved in a sugar-and-vinegar shrub to make a lively modifier. “The natural astringency of rhubarb gives the julep a more refreshing and cleansing quality and makes it more food-friendly,” says Fehribach.

Bowing out for the season are the Upcountry Mist, prepared with gin, orgeat made from long-cooked oat groats, house-pickled peach juice and soda; and the Freetown Manhattan, mixed with bourbon, house damson plum cordial and birch bark bitters.

The Bloody Mary Jones also shows Fehribach’s culinary chops. It features house-made Worcestershire sauce made with malt vinegar, molasses, tamarind, onion, anchovies, garlic and mushrooms. He uses it to add rich umami flavor in cooking as well. “We use it in a lot of items where we want an extra savory kick,” Fehribach says.

Finding inspiration in the kitchen

“Maybe you have a great pico de gallo that you can spoon on top of a margarita, which is so delicious,” says Casey. “Or perhaps you have a really unique sauce or salt or spice mixture that you can use to rim a cocktail glass. Try thinking outside the box like that.”

The savory notes of fresh produce and herbs come in handy for creating cocktails that are dry and nuanced. “I think the general public is definitely drinking drier now,” says Casey. “Super-sweet cocktails tend to be very filling, but with lighter cocktails, you might have more than one.”

At Husk in Charleston, S.C., cucumber shines in a drink called Carried Away, along with vodka, caraway, black pepper, lime and tonic. It is also a key ingredient at The Tasting Kitchen in Venice, Calif., in the Ocean Spray, which also includes gin, citrus and salt.

The culinary technique of smoking — ingredients, garnishes and even glassware — also adds distinction to drinks. Casey suggests tipping a cocktail glass over smoldering wood chips ignited by a kitchen torch “to bring a fun, smoky note.”

In today’s ultracompetitive industry, driving beverage revenues is essential. Operators can keep pace with the trends by leveraging the appeal of signature drinks featuring fresh, savory ingredients and culinary inspirations.