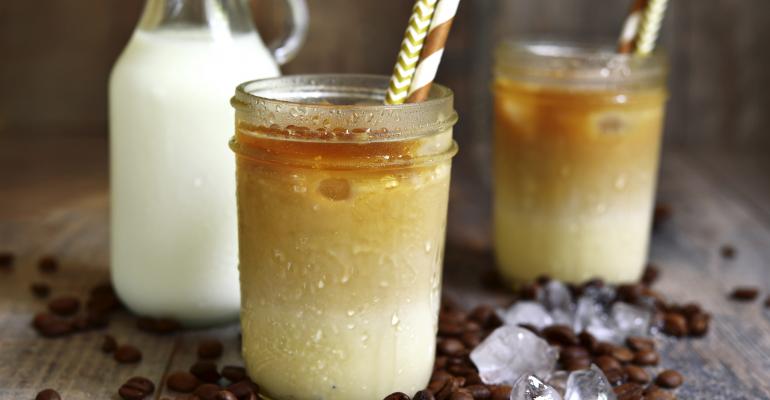 In just a few years cold brew coffee has evolved from a coffee bar novelty into a hot-selling retail product and a signature refreshment beverage in many restaurants.

Esteemed for its smoother taste, lower acidity and higher caffeine, the long-steeped elixir is energizing coffee sales after breakfast, attracting younger consumers with flavored variations and starring at the bar in signature cold brew cocktails.

The blog of Food and Drink Resources, a culinary consulting agency in Centennial, Colo., reports that coffee innovators are riffing on cold brew by infusing it with flavorings like hops, cocoa nibs and chicory and aging it in whiskey barrels.

Given its growing acceptance and notoriety, cold brew scores points with restaurant customers, operators say. “When people see cold brew on the menu, they say, ‘Oh, wow, that’s awesome. It’s cool that you guys have this,’” says Johan Engman, founder and owner of the seven Breakfast Republic restaurants based in San Diego.

Engman’s eateries are riding the cold brew wave with organic nitro-infused cold brew, the Cocky 12, a highly caffeinated cold brew extracted for 12 hours and the Sweetie Cocky 12, the latter plus vanilla and half and half.

At Giant Coffee in Phoenix, cold brew coffee sales have increased by 25 percent over the past year, reports owner Matt Pool. Five-gallon batches steep there for 24 hours becoming a flavorful concentrate.

He sees cold brew as an option for patrons who seek a caffeine boost with a smoother flavor profile than hot coffee and an alternative to packaged energy drinks. “If you are looking for a pick-me-up with less sugar, cold brew is a way to go,” he says.

Starring at the bar

Looking ahead, Wescoat envisions further flavor exploration in cold brews, including a chocolate peanut butter version made with ingredients shared by the brand’s culinary side.

At Breakfast Republic, the Horchata Cold Brew was a popular summer specialty cocktail, combining local horchata-flavored vodka with the house nitro cold brew. Engman says that the eye-catching effect created when nitro coffee cascades into the glass stimulates impulse sales: “If you see the bartender making it, it almost makes you want to order it.”

Across the foodservice spectrum, cold brew coffee is emerging as a must-have menu item. Today’s cold brew enthusiasts are eager to explore new flavor variations and presentations of their favorite refresher.