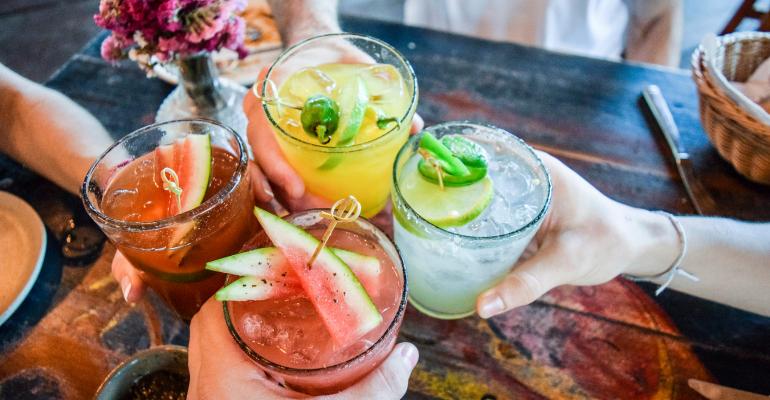 To satisfy rising demand for beverages that quench thirst and are also good for you, a growing number of operators offer choices made with natural ingredients and less sugar. Many use water, either still or sparkling, as the base. For flavor and sweetness, they rely on fruits, juices, herbs, spices and high-quality branded syrups, purees and concentrated flavors.

Natural sweeteners like stevia and monk fruit are in use along with unsweetened concentrates that impart only robust fruit flavor. Trending now in beverages are flavors like lime, coconut, jalapeño, habanero, cardamom, hibiscus, cucumber, basil, rosemary and such botanical essences as lavender, elderflower and rose.

Against this backdrop, the introduction of new flavors of spring water is “one of the recent trends which seem to be gaining significant traction,” reports Ipsos Knowledge Centre. “Floral infusions in plain old water” is a trend buzzword for 2019, says Baum + Whiteman, a Brooklyn, N.Y.-based consulting company. Also on the rise is gazoz, a nonalcoholic spritzer from Israel made with herbs, fruits and sparkling water. It ranked second among on-trend nonalcoholic beverages in the National Restaurant Association What’s Hot 2019 Culinary Forecast.

At Lazy Dog Restaurant & Bar, a 30-unit chain of casual-dining restaurants based in Huntington Beach, Calif., alcohol-free offerings refresh and please the palate in a lighter, less sugary way. “When the weather warms up, we really see people turn to drinks that they can hydrate with and feel comfortable drinking,” says Gabriel Caliendo, vice president of research and development at Lazy Dog. “We make them with natural fruit juices, not the sticky sugar stuff.”

An example is Lazy Dog’s Housemade Ginger Beer. “We grind pounds of ginger, cook it and add a lot of soda water and another housemade item, our sweet and sour mix, which is nothing more than fresh lemon, lime and orange juice,” says Caliendo. “Because the ginger is so strong, the drink is flavorful even though it is primarily soda water. In comparison, most bottled ginger beers are chock full of sugar.”

Caliendo notes that the coconut water in the drink provides natural electrolytes. “This drink is not only delicious and beautiful, but also functional,” says Caliendo. “You’re not drinking it just for flavor.”

One of the challenges of menu development is making an item that is novel yet still approachable. An intriguing descriptor can help to sell it. Take Lazy Dog’s Jamaican Lemonade, for example. “We all know what lemonade is,” says Caliendo. “But when you say Jamaican Lemonade, people don’t know quite what to expect.”

What they get is “an alcohol-free beverage with layered flavors and colors, based on orange, pineapple and pomegranate juices, with a nice soda water component to make it refreshing,” says Caliendo. It is served with a pipette of coconut flavoring to squeeze into the drink as a fun, interactive touch.

Other imaginative offerings around the country include:

The future of refreshment

In addition to greater use of water and clean, natural, less sugary ingredients, Caliendo sees an expanding role in refreshment beverages for ingredients with established healthful attributes. An example is turmeric, a root with a long-healing and culinary tradition in India. “We use it in a few food items and now I’m trying it out in my drink R&D,” says Caliendo. “It is fairly benign in flavor, but it lends a beautiful, bright yellow color.”

“As a chef, I love relying on things that are tried and true,” says Caliendo. “You know there are flavor profiles that work, and it’s just a matter of putting our twist on it.”