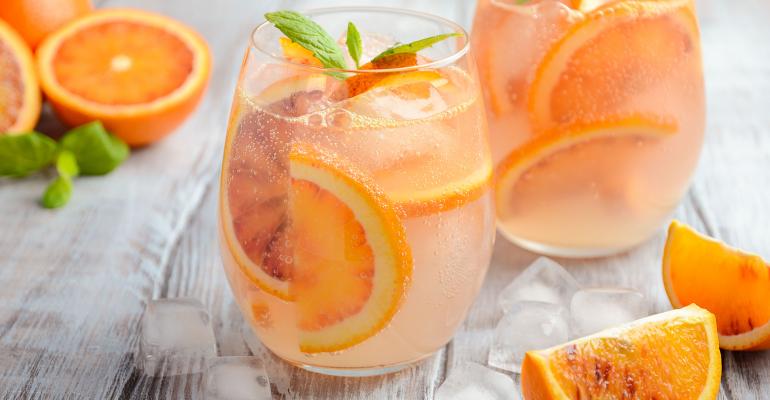 We Americans seem to be getting over our penchant for sugary carbonated soft drinks. But it seems our fondness for bubbly beverages is still going strong.

That is good news for restaurant operators trying to make up for slumping soda sales by promoting refreshment beverages with healthier perceptions, less sugar and a bit of fizz, such as sparkling iced teas, premium waters and house-made soft drinks.

In 2007, just over a third of high school students drank a sweetened beverage each day, but by 2015 that number had fallen to 20.5 percent, according to a recent report by the U.S. Centers for Disease Control and Prevention. In a survey of over 1,000 college students by industry consultants Beverage Marketing Corporation and Fluent last year, 33 percent of students said they plan to drink less soda and only 3 percent plan to drink more. Bottled water was their top beverage purchase, with 43 percent consuming it more than seven times per week and 42 percent saying they plan to drink more in the future.

And of all the nonalcoholic beverage trends rated by professional chefs in the National Restaurant Association What’s Hot 2017 Culinary Forecast, house-made/artisan soft drinks ranked No. 1.

“I really think effervescence and bubbles are hot,” says Kathy Casey, president of Kathy Casey Food Studios and Liquid Kitchen, a consultancy based in Seattle. “When you think about bubbles, don’t you feel good? You think about blowing bubbles as a kid and having fizzy drinks, and how joyful and happy that made you feel.”

Adding carbonation to a beverage creates more of an experience, says Sheena Brady, a certified tea sommelier based in Ottawa, Canada, and president of the e-commerce brand Tease Tea. “It makes it much more than having just plain water.”

Brady points to sparkling iced tea, which has emerged in coffee and tea shops and some restaurants of late, as a refreshment beverage with considerable marketing potential. Some operators are infusing it with nitrogen gas and serving it on tap systems, following in the footsteps of trendy nitro coffee, an offering at some locations of Starbucks and other coffee chains.

“Nitro iced tea is such a cool experience because the bubbles add a natural creaminess, like a Guinness,” says Brady. “In addition, the nitro infusion removes some of the bitterness of the tea, so you don’t need sugar or dairy. And it is visually stunning.”

Operators who lack the space or wherewithal to install a tap system can make appealing sparkling teas by hand, simply by mixing sparkling water with extra-strong iced tea, Brady adds. But whether poured from a tap or a cocktail shaker, sparkling tea is a refresher with a unique good-for-you appeal. That is because tea is perceived as a natural product high in beneficial antioxidants.

Another route to refreshment is via signature soft drinks. Operators can tap fresh, seasonal ingredients and the expanding array of flavored syrups and fruit purees to devise their own unique bubbly refreshers. Roam Artisan Burgers, with three locations in San Francisco, features house-made artisan sodas in flavors such as caramelized pineapple, Meyer lemon and prickly pear, each made in-house with top-quality ingredients.

“Since we do burgers with grass-fed beef and free-range turkey and all-natural bison, it only makes sense to have drinks that fit that better-for-you philosophy,” says Josh Spiegelman, Roam’s owner and co-founder.

Take the caramelized pineapple soda. It is made with ripe, flash-frozen pineapple, which is lightly caramelized, pureed and mixed with filtered, carbonated water. No sweeteners are added. “We wanted sodas that are lighter, not sugary, not cloying,” says Spiegelman, “so we made our own without corn syrup or anything artificial.”

Also authoring a one-of-a-kind soda is another San Francisco establishment, Beretta. The contemporary Italian eatery, part of the Back of the House Inc. restaurant group, makes a ginger soda that is popular with guests.

“House-made ginger soda is a common offering at bars that take their beverages seriously,” says Beretta bar manager California Gold in an e-mail. “It’s good to have on hand because it plays well in cocktails, such as our Kentucky Mule.”

What distinguishes Beretta’s creation is its fresh ginger syrup. “Fresh ginger soda tastes better because it's fresher and therefore spicier,” says Gold. “I think it’s so much better than store-bought ginger soda.”

In addition, it comes in handy for nonalcoholic drinks. “Most people who are not drinking get excited that we can make them a fun nonalcoholic drink and not leave them out of the party,” Gold says, “and they get even more excited when we deliver a really delicious concoction.”