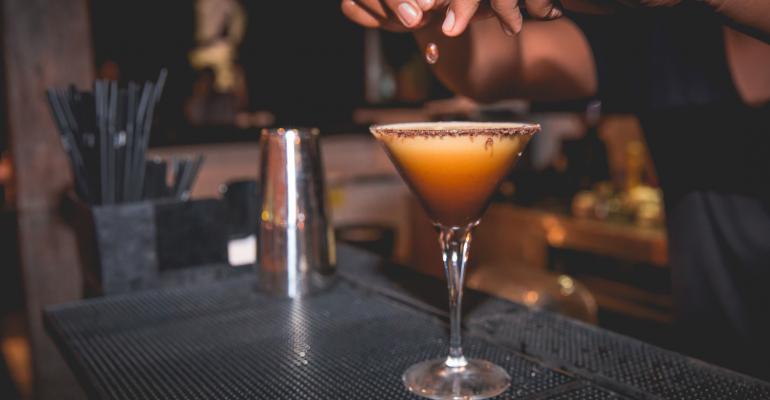 After going full tilt with cocktails inspired by the beach, patio and farmers’ market all summer, restaurant operators are shifting gears to fall and winter libations which strike a much different tone.

They’re changing from light, refreshing impressions to the deeper, richer flavors and ingredients that consumers crave at this time of year. The latter include apple, pear, blood orange, kumquat, clementine and other winter citrus fruits, warm spices like cinnamon, nutmeg and allspice and seasonal favorites like caramel and hazelnut. The spirits they pour will veer toward the darker and more robust.

Interestingly, some of the most accomplished creators of fall and winter drinks are respectful of traditional flavors and practices, but not chained to them. Their drink menus sport both classic recipes and novel takes. Their search for flavoring sensations will lead them to a variety of scratch-made and commercially prepared bitters, shrubs, syrup, purees and other bar goods.

Drinks made with apples and winter citrus — perennial go-to ingredients in fall and winter cocktails — can be enlivened by adding layers of innovative flavors.

At Bibiana in Washington, D.C., an Italian concept in the nine-unit Knightsbridge Restaurant Group based there, the Clementina Fizz was one of the 25 Cocktails for Christmas promotion last year. It was a medley of Italian bitter orange aperitif, prosecco and the juice of clementines “roasted to emphasize their sweeter flavors,” says Michael King, Knightsbridge general manager.

Other riffs at Bibiana include the ginger-forward Christmas Buck, made with Czech herbal bitter, house-made ginger beer and cassis, and the Affogato Martini, inspired by the Italian dessert of gelato “drowned” with hot espresso. The latter was a medley of vodka, coffee liqueur, fior di latte gelato and shaved dark chocolate.

Drinks like eggnog, hot buttered rum and mulled wine are synonymous with fall and winter tippling. But in today’s trend-dominated beverage scene, an old favorite may need to be refreshed to drive sales. Bibiana, for example, recast hot buttered rum with a base of hot house-made apple cider rather than water and a topping of spiced compound butter. “We elevated it into something our guests really enjoy,” says King.

The Hot Buttered Sazerac at Sable Kitchen & Bar, another Kimpton restaurant in Chicago, featured the trademark Sazerac formula of rye whiskey, absinthe, sugar and bitters plus hot water and compound butter mixed with bitters. “It’s a really delicious hot toddy that warms you from top to bottom,” says Mike Jones, head bartender at Sable. “It has the richness of the butter, full-bodied whiskey flavor and the nose of anise from the absinthe.”

Thinking Outside the Season

It may be customary to use dark spirits like whiskeys and brandies in fall and winter cocktails, but there is no law against going lighter. “Bartenders may shy away from gin, cachaca, pisco and rum, but not for any good reasons,” says Knott. “So much can be done with them.”

For instance, another of Knott’s apple creations at 312 Chicago was a mixture of white rum, apples, cinnamon, cloves and vanilla, which not surprisingly tastes like apple pie. “It’s just a matter of thinking about spirits in different ways,” says Knott.

Gin and tonic is a quintessential summer drink. But Bibiana’s Winter Gin & Tonic, made with a house-made tonic syrup laced with citrus, lemongrass and baking spices, has the warming qualities that make a popular holiday specialty, King says.

Sable menus multiple versions of gin and tonic all year in the Spanish style, showcasing distinctive spirits and a variety of supporting flavors. “In the summer, they are on the lighter side, and in the winter they get deeper in flavor,” says Jones. “We’ve done apples and cranberries and spruce tips.”

There are many ways to make a splash with fall and winter cocktails, from polishing a classic drink to exploring an entirely new combination of ingredients. For some operators, the mindset is to lead rather than to follow. “Every time we change the menu, it becomes more of a challenge to find what hasn’t already been done,” says Jones. “We are definitely not looking for conventional or traditional.”