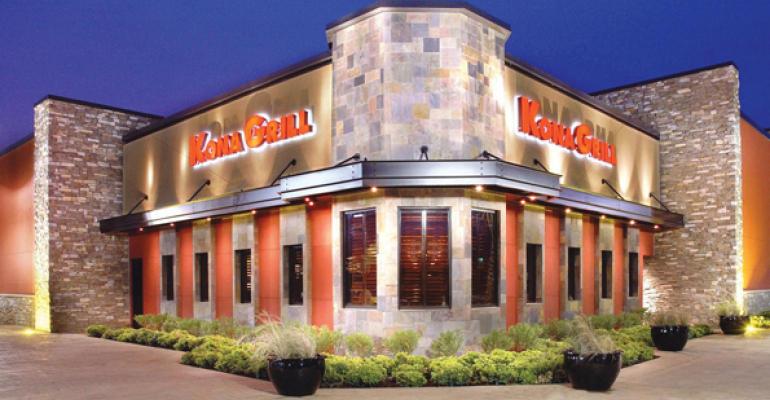 The One Group Hospitality Inc. and its subsidiary Kona Grill Acquisition LLC have agreed to buy Kona Grill Inc. in a bankruptcy court deal valued at about $25 million after a July agreement with Williston Holding Co. Inc. was vacated, court documents indicate.

The Denver-based One Group, which owns the STK steakhouse concept, agreed to buy 24 of Kona’s domestic restaurants in 18 states and assume two international franchise licenses for $25 million in cash and the assumption of about $10.8 million in working capital liabilities, the company said Tuesday.

Scottsdale, Ariz.-based Kona Grill filed in May for Chapter 11 bankruptcy protection in U.S. Bankruptcy Court for the Delaware District, citing assets of $53.6 million and debts of $74 million, after closing a number of units amid financial challenges and several changes in executive leadership.

“Through this transaction, we believe we can leverage our corporate infrastructure and operating expertise, particularly our bar-business know-how and ‘VIBE’ dining, to drive improved performance in many of the same ways we have substantially improved comparable store sales and overall profitability at STK,” said Emanuel “Manny” Hilario, One Group president and CEO, in a statement.

A July 25 $20.3 million stalking horse bid by Houston-based Williston Holding Co. Inc., headed by former Kona CEO Marcus Jundt, was vacated in August after the company said it would be unable to close under the terms of the asset purchase agreement, according to court documents.

One Group said expects to finance the acquisition with a new financing facility and cash on hand, and, if completed, it expects integration to take about a year. “Once fully integrated, the acquisition is expected to add approximately $100 million in annualized revenue and to be accretive to earnings,” the company said in a press release Tuesday.

“The acquisition of Kona Grill also provides us with a complementary concept to STK, potentially creating another long-term growth vehicle once we fully integrate the restaurants into The One Group,” Hilario said.

“The remaining 24 domestic restaurants, down from 40 at year-end 2018, reflect a strong base of high performing restaurants in attractive markets. We look forward to maximizing the multiple opportunities that this acquisition will provide to create long-term shareholder value.”

The Kona assets include the worldwide rights to the name “Kona Grill” and other intellectual property, including trademarks, domain names, menu recipes, and customer databases. The acquisition is subject to financing conditions, the approval of bankruptcy court and other customary closing conditions.

The bankruptcy court has left open objections to the proposed sale until 4 p.m. Sept. 17.

The One Group has 12 domestic and eight international STK locations.