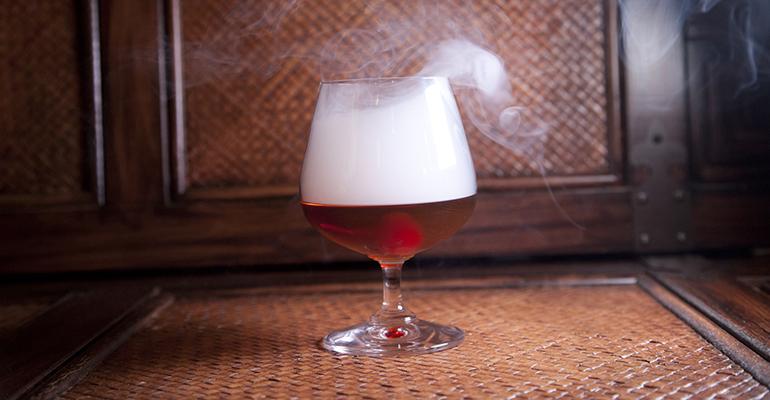 Where there’s smoke, there are cocktails

The hot ingredient — literally — adds flavor and drama to drinks

One of the most popular tools in bars these days isn’t a silicone ice cube tray or a copper-plated muddler.

The handheld device blows smoke into bottles, glasses and decanters, and adds one of today’s most sought-after flavors to drinks. “There has definitely been an uptick in the interest in smoked cocktails,” said Bill Edwards, senior vice president for on-premise national accounts for alcohol distributor Southern Glazer’s Wine & Spirits.

Edwards explained his theory for why smoke is trending.

“Cocktails are a very sensory experience — visual first, then aroma, then taste — and smoking delivers across the spectrum,” he said.

Restaurants and bars are using smoke to hit all these sensory points.

Craig Schoettler, director of spirits, wine and beer at Aria hotel in Las Vegas, uses a smoking gun for a cocktail at Sage restaurant called Smoke.

To make the cocktail, he mixes Rémy Martin 1738 Cognac, lemon juice, apple juice and baked apple bitters into a crystal Louis XIII decanter. Then he fills the decanter with applewood smoke, stoppers it, brings it to the customer’s table and pours it in a cocktail glass.

“You can’t see through the decanter because of all the smoke, and you can definitely smell it,” Schoettler said.

Pathak combines Hennessy VS brandy with Carpano Antica sweet vermouth, vanilla crème de cacao, a little Ardbeg 10-year Scotch and Angostura bitters. He stirs the ingredients, pours them in a brandy snifter filled with star-anise smoke and garnishes it with a cherry.

The drink is named for a character in the HBO television series “Game of Thrones.”

“At the end of season four, it was a complete mystery if he [Jon Snow] was going to come back for the next season,” Pathak said, noting that the smoke engulfing the cocktail shrouds it in similar mystery. The drink is made with Old Forester bourbon, housemade cola syrup, chocolate bitters and Angostura bitters. That’s all poured into a skull-shaped decanter, which is then filled with smoke from an apple-and-cedar-wood brick. Then he shakes it all together, pours it over ice, tops it with club soda and garnishes it with Luxardo cherries.

“The smoke almost gives a velvety texture to it,” Cacciapaglia said, and the plume of smoke rising from it draws attention.

“It’s actually our biggest seller,” he said, adding that when one customer orders it, others tend to follow suit.

The drink combines single-malt whiskey, Demerara syrup and bitters, stirred with ice for 30 seconds. He uses a smoking gun to fill a pipe-shaped glass with applewood smoke and then pours in the cocktail.

“It’s kind of funny that we’re in a non-smoking hotel,” Murcia said.

Bartenders are also using methods besides a smoking gun to add a whiff to cocktails. Adding smoky flavor can be as simple as using mezcal or peaty Scotch as an ingredient.

That’s what Nick Bennett does with the Gun Metal Blue cocktail at Porchlight in New York City, made with Mezcal Vida, blue curaçao, lime juice, a little bitter cinnamon syrup and peach brandy. The ingredients are all shaken and strained into a chilled coupe glass and garnished with a flamed orange coin.

At Tom Colicchio’s Heritage Steak at The Mirage hotel in Las Vegas, the smoke in the Heritage Manhattan comes from cherries.

Chefs smoke cherries in small batches using hickory wood chips, and then drop them back in their syrup, which also takes on a smoky flavor. That’s also added to the Manhattan, along with Michter’s Rye and Carpano Antica vermouth. Back at Sage, Schoettler uses a different method to smoke the restaurant’s Barrel Stave cocktail: a specially made, proprietary bourbon.

“They send us the bottles; they also ship us the barrels,” he said.

The barrels are broken down into the individual planks, or staves. Round pieces are cut out of them, which are slightly smaller than the diameter of a rocks glass.

One of the rounds is set on fire with a blowtorch, and when it’s smoldering, Schoettler inverts a rocks glass over it. “It fits perfectly in there, so the smoke all stays in the glass and doesn’t dissipate,” he said.

The smoky glass is brought to the table, the cocktail is made, the glass is turned right-side up, and the drink is poured into it.

The actual contents of the Barrel Stave vary seasonally, but Schoettler avoids using whiskey because he aims to capture the aroma of the bourbon barrel stave, but not necessarily the flavor.

“I’d rather play the aroma because it’s a very distinct, sweet smoke smell that’s great for an aroma for a complementary spirit,” he said.

While smoky cocktails draw oohs and ahs from customers, they can be a challenge to execute at high-volume restaurants, said Eduardo Dingler, beverage director for the Morimoto restaurant group.

Dingler developed the Fool Me Once cocktail, which combines Iichiko Kurobin Mugi Shochu, made from barley, with Amaro Averna and a dash of walnut bitters.

The mixture is poured over smoke from hibiscus and pink peppercorns. The aromatics are placed in a small bowl and torched tableside for two to three seconds. Once they are glowing, they are covered with an inverted glass for 30 to 40 seconds, and the drink is poured in. The cocktail is garnished with a sprig of wheat.

“In theory, it doesn’t take that long, but you’re adding a minute or two to the whole experience,” Dingler said. “As a guest, it’s very much appreciated, but when you’re doing 300 to 400 covers, a Martini coming to the table beats it time-wise.”

For that reason, the drink is more popular at the Morimoto restaurant on the Hawaiian island of Maui, which is a much smaller restaurant, and whose staff and management is more on board with promoting it.

Dinger said: “The cocktail has one of those effects that, when one table orders it, the next table over says ‘What’s happening over there?’”